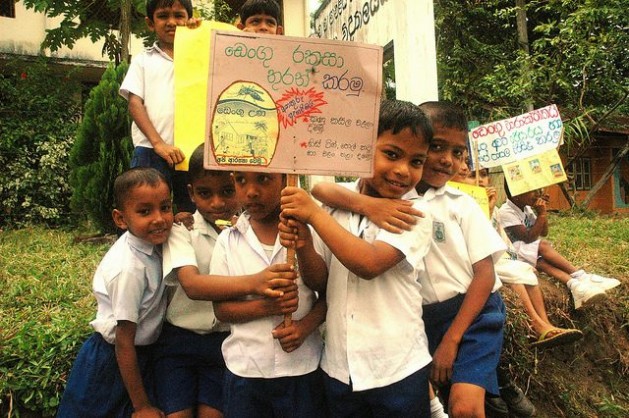 COLOMBO, Jun 30 2014 (IPS) - What’s the connection between weather forecasts and the mosquito-borne dengue virus? It’s not just a question for science nerds; in Sri Lanka, health officials believe answering this question could save lives.

For over half a decade now, doctors and residents of this island nation, especially those living in the cramped Western Province, have been battling the persistent, sometimes deadly, dengue plague, which tends to follow the monsoon rains that drench the southwest coast from June to October.

The tropical disease generally results in prolonged fever, muscle and joint pains, as well as skin rashes. In a small number of cases, the disease turns into the life-threatening dengue hemorrhagic fever, characterised by bleeding, low levels of blood platelets, or dangerously low blood pressure, which can send the victim into shock, sometimes triggering fatalities.

“When we have better forecast data, we [will] be able to correlate the disease distribution in various parts of the island and make a feasible disease map that can be used for the whole country." -- Faseeha Noordeen, head of the department of microbiology at the University of Peradeniya
In mid-2009, soon after the annual monsoon, dengue infections increased at an alarming rate across Sri Lanka. By the end of the year, 35,095 people were infected, while the number of fatalities stood at 346.

The impact of the epidemic can be gauged by comparing current infection rates with the last dengue outbreak, which was recorded in 1989, a year that saw 200 infections and around 13 deaths.

While fatalities have been brought down – there were 83 deaths in 2013, the same year that logged 32,000 infections – dengue experts and medical professionals say there is an urgent need for a comprehensive management plan to curtail the impact of the disease.

It is not that Sri Lanka has been lax on tackling mosquito breeding grounds; in fact it has initiated everything from a Presidential Task Force on Dengue Prevention, to fines for those who neglect possible breeding grounds, to declaring national dengue eradication programmes.

Unfortunately, the combined result of these projects is that the rate of infection is exactly what it was five years ago, or – in areas where slight reductions are reported – still alarmingly high.

The situation is especially worrying in the Western Province, home to over 25 percent of the country’s population of over 20 million people, and to 60 percent of all reported dengue cases since 2009.

Given that so many strategies have been tried and failed, experts are now suggesting that the authorities call in help from the national Meteorological Bureau as the latest weapon in the fight against the virus.

Faseeha Noordeen, head of the department of microbiology at the University of Peradeniya in central Sri Lanka, told IPS that there is a clear connection between changing climate patterns and the spread of dengue.

In a research paper she co-authored, published in the International Journal of Infectious Diseases in October 2013, Noordeen said that mosquito breeding grounds increased following heavy rains, pointing out that the two annual peaks in infections were recorded soon after the two annual monsoons.

“When we have better forecast data, we [will] be able to correlate the disease distribution in various parts of the island [and] make a feasible disease map that can be used for the whole country,” she said.

Pannilahetti agrees, stressing that detailed forecasts would be “invaluable” for people like her, who are tasked with hunting a species of mosquito that is constantly on the move, and eradicating a disease that is constantly changing.

“Right now we are following the rains,” she said. “Preemptive programmes could be much more effective.”

Midway through June the Prevention Unit was scrambling to relocate most of its resources to the Western Province, which absorbed the heaviest rains in the first week of this month.

The third of week of June, meanwhile, saw the launch of a massive dengue eradication programme that included members of the armed forces, Pannilahetti added.

Some regions of the province received four to six times their average June rainfall in the first week of the month this year. Pannilahetti said that detailed forecasts would have enabled health officials to raise their levels of preparedness beforehand.

She added that the burden of the disease is unevenly distributed between the rich and poor, since the spread of dengue is largely determined by the cleanliness of the immediate environment, and a community’s proximity to receptacles like tanks of stagnant water, or even accumulated garbage.

“What we have seen is that there are more breeding grounds in low income areas, where people tend to pay less attention to how safe or healthy their immediate environment is,” Pannilahetti said.

LakKumar Fernando, who heads the Centre for Clinical Management of Dengue and Dengue Hemorrhagic Fever at the Negombo Government Hospital, 35 km north of the capital Colombo, says that dengue can be successfully treated if detected early.

“The first thing is to get a blood test done,” he told IPS; but doing so costs about 2,000 rupees (about 15 dollars) at private clinics, a sum that many people in this country cannot afford.

In a bid to make the process more accessible, the government recently set up six new blood testing centres in government hospitals across the Western Province, but these alone will not be able to tackle the hundreds of cases coming in every single day, according to experts.

The unit that Fernando heads has been recognised as one of the best treatment facilities in the country, with only a single fatality out of 1,180 cases admitted since June 2013.

“We never let our patients go into shock, we monitor them round the clock,” Fernando said, adding that the most effective treatment for dengue was constant monitoring of blood pressure, pulse and urine output while maintaining a good fluid intake.

But the cost of setting up the unit, where each of the 17 beds is equipped with state-of-the-art monitoring equipment, was about 100 million rupees, or 750,000 dollars, hardly the kind of initiative that can be easily replicated around the country.

In fact, units like the one in Negombo are few and far between in Sri Lanka’s public health system, which makes an even stronger case for developing solid prevention systems, experts say.