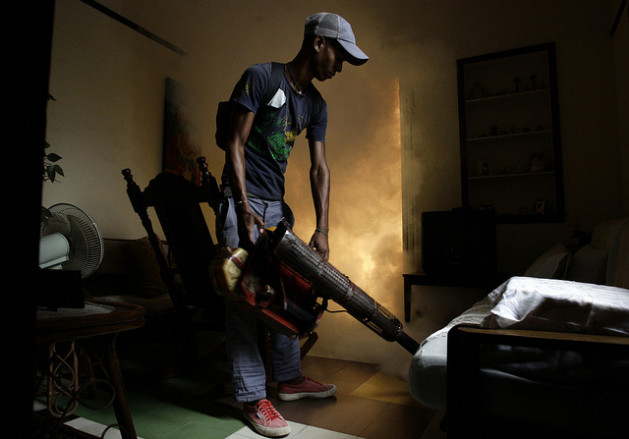 HAVANA, Aug 22 2013 (IPS) - The spread of the virus that causes dengue fever has created an emergency situation for institutions, governments and scientists in Latin America seeking sustainable solutions for a health problem that could worsen as a result of climate change.

World Health Organisation (WHO) statistics indicate that in the first seven months of 2013 there were nearly 1.4 million reported cases in the region, making this an epidemic year.

“In 2012 there were a total of 1.7 million cases, and we do not know yet if the figure will be higher in 2013,” said Luis Castellanos at the 13th International Course on Dengue Control, being held in the Cuban capital Aug. 12-23.

Dengue fever is a mosquito-borne viral infection that causes flu-like illness and other symptoms, and occasionally develops into the more serious dengue haemorrhagic fever, which can be fatal, WHO says.

Castellanos, from Guatemala, is responsible for control and prevention of communicable diseases at WHO. He said the incidence of dengue, also known as “breakbone fever” because of the muscle and joint pains some patients endure, increases where health infrastructure is poorest and educational levels are lowest.

Cuban entomologist Juan Bisset believes climate change is partly to blame for the wider spread of dengue cases, based on his studies of Aedes aegypti, the mosquito that carries the dengue virus.

He said higher temperatures caused by climate change are speeding up the mosquito’s breeding cycle and increasing the risk of transmission of the virus.

Other experts warn that the Aedes aegypti mosquito is appearing in unexpected parts of Europe, as it did in 2009 in the south of France, and more recently in Portugal.

WHO recommends raising awareness on climate change as a fundamental threat to human health; ensuring that health is properly represented in the climate change agenda; and assisting countries to build capacity to reduce health vulnerability to climate change.

“Outbreaks of dengue fever indicate the failure of mosquito control measures,”
Bisset, who is head of the department of vector control at Cuba’s Pedro Kouri Institute of Tropical Medicine, told IPS. The institute is hosting the course which is being attended by some 300 experts from Argentina, Brazil, the United States and European countries.

The key is to focus not on the pathology of the disease, as most countries do, but to combat Aedes aegypti itself, Bisset said. To do this, he proposed a comprehensive strategy of control extensive over large areas.

The scheme is not new and includes using insecticides, biological methods and environmental clean-up and prevention. “But it has traditionally been done only in small areas,” said Bisset.

A November meeting in Panama should facilitate the exchange of information, he said.

The Aedes aegypti mosquito, according to studies cited by Bisset, originated in Africa, and has since spread to all tropical areas around the world. It has been present in the Caribbean for over 350 years.

The mosquito’s preferred breeding areas are relatively clean, still waters, such as in uncovered barrels, buckets and discarded tyres.

“Cuba is an island in an ocean of dengue,” said Bisset, adding that he had no figures on the present situation in the country regarding outbreaks of the disease.

“The vector index (the number of vectors detected per 100 households) was 0.01 in 1987, and now it is 0.3,” he said, adding that efforts are being made to avoid indices above 0.5, which facilitate transmission of dengue fever.

The Aedes aegypti mosquito is most prolific in Cuba in the months of August, September and October, due to the favourable conditions provided by rainfall and high temperatures. However, house-to-house spraying of insecticides is carried out almost year-round, although it is not always welcomed by the population.

The Cuban authorities say the community plays a very important role in dengue prevention, because the mosquitoes coexist with families, inside homes or in the yard.

“People know a lot about dengue and the Aedes mosquito, but still they do not always facilitate our work,” a fumigator who had just found several locked apartments in a building he was spraying told IPS.

Cuba established a control programme aimed at eradicating the mosquito vector after the 1981 dengue epidemic, when there were more than 400,000 cases, 10,000 of them the more serious dengue haemorrhagic fever, and a death toll of 158, including 101 children.

According to official reports, the cost of the epidemic was 103 million dollars.

Action against the mosquito vector includes reducing its breeding grounds by means of inspections and fines to ensure that people do not leave open containers with water laying around, spraying, and community participation in environmental clean-up.

For now, the only option is to keep the mosquito vector under control, while scientists work on developing a vaccine.

During the course, Cuba announced that its dengue vaccine was in the final phase of preclinical studies in rats and monkeys, the last stage before clinical trials in humans.

The initial results of the clinical trials will be published in 2015.

According to WHO statistics, there are between 50 and 100 million dengue cases each year, in over 100 countries. The illness has overtaken malaria as the most widespread vector-borne disease in the developing South.