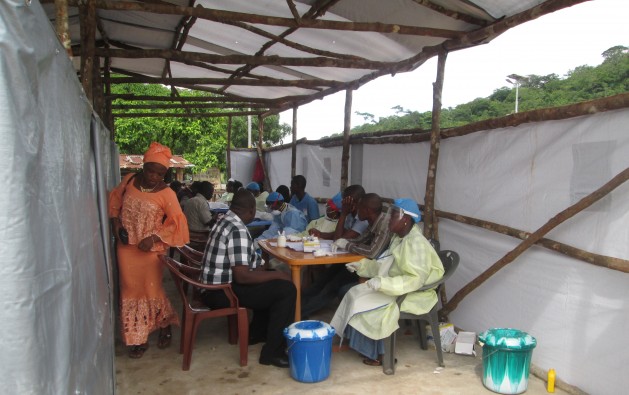 A medical centre at the Bandama checkpoint in Kenema to test people in transit for symptoms of Ebola. Credit: Mohamed Fofanah/IPS

KENEMA, Sierra Leone, Jul 12 2014 (IPS) - Adikali Kamara is a 36-year-old student nurse working in the government hospital in Kenema, a sprawling town on the fringe of the Sierra Leone’s Gola tropical rain forest.

On June 19, he began feeling unwell, complaining of fever and a headache, and went to a chemist near where he lived to buy anti-malaria drugs and antibiotics to treat typhoid fever. “I thought that my symptoms indicated either malaria or typhoid because these are the most common ailments suffered by everybody here,” said Kamara.

However his condition did not change and two days later he decided to seek proper treatment at the hospital. That was when the doctors discovered he was suffering from Ebola, a disease that causes fever, vomiting, bleeding and diarrhoea and kills up to 90 percent of those infected.

Kamara was admitted immediately and just seven days later he was discharged after receiving supportive treatment.

“People are vehemently denying that Ebola exists despite the massive awareness raising that is going on, and those that do believe the illness exists are so afraid that they do not come to the hospital or bring their relatives when they are sick. That is how Ebola spreads in the community” – Michael Vandi, Public Health Education Officer for Sierra Leone’s Eastern Province

Kamara is one the fortunate 51 persons in Sierra Leone who have survived the current Ebola scourge that is also ravaging two other West African neighbours – Guinea and Liberia. So far, 99 have died in Sierra Leone and a further 315 men, women and children have tested positive.

The Public Health Education Officer for Sierra Leone’s Eastern Province, Michael Vandi, who is based in the Kenema hospital which houses the country’s only Supportive Treatment Centre and testing laboratory for Ebola, said that the country is far from winning the fight against the disease, blaming people’s fear and denial of the disease.

Vandi said that “people are vehemently denying that Ebola exists despite the massive awareness raising that is going on, and those that do believe the illness exists are so afraid that they do not come to the hospital or bring their relatives when they are sick. That is how Ebola spreads in the community before we are aware of cases.”

According to Vandi, people are accusing doctors of administering lethal injections to the Ebola patients or removing vital organs for sale in European markets. He said that some even claim that people are being deliberately infected with the virus to reduce the population.

As a result, doctors and nurses in the hospitals have been attacked and many nurses are not wearing their uniforms on the way to work for fear of being attacked in the streets.

“Patients who were admitted – both male and female – are abandoning the hospitals,” said Vandi. “They are now going to pharmacies or being treated by quack doctors or nurses in their homes. This is worrisome because the signs and symptoms of Ebola mimic the prevalent malaria and typhoid fever in the country and, before they know what they are dealing with, it will be too late.”

He pointed out that the eastern part of the country, in which almost all cases of Ebola have so far been identified, is an opposition stronghold. “What the central government is doing, which I think is wrong, is sending people to these communities that the people cannot identify with; they are parliamentarians, they are ministers, they are executives from the ruling All People’s Congress party and this is a country where everything is polarised,” he said.

According to Yarjah, people in the country’s Eastern Province are saying that “because a census is scheduled for September, the politicians want to scare people away from this part of the country so that their number will dwindle; then, when they delimit the boundaries for constituency seats, this will mean less representatives for the opposition in parliament in the next election.”

“I think government should use the local structures, like the paramount chiefs, the medical personnel on the ground, and the local councils,” Yarjah told IPS.

Meanwhile, the government has announced a ban on regular trade fairs in Kailahun, one of the districts in Eastern Province worst hit by Ebola. There has also been an executive order for placing medical personnel at a number of checkpoints on roads from the Eastern Province to check people for Ebola-related symptoms.

“This has affected our agriculture,” complained Lamin Musa, a farmer from Kailahun. “We cannot sell our produce now at the trade fairs and this had heaped more hardship on our poor people. Even bush meat, which had been a lucrative trade for us, has been banned. It is difficult for us to understand all the suffering we have to undergo because of Ebola.”

Whatever the misgivings, misconceptions and accusations, the virus is thriving, in part due to dysfunctional medical systems and weak disaster management structures in Sierra Leone and its neighbours.

The ministers adopted a common inter-country strategy calling for accelerated response to the Ebola outbreak in West Africa. The strategy stressed the need for regional, sub-regional and national leadership, coordinated actions by all stakeholders, enhanced cross border collaboration and the involvement of communities.

For his part, Kamara is optimistic. “I was able to beat this disease and any of you out there can,” he said. “You have to believe that Ebola is real, set aside prejudice and go to the hospital early if you experience the symptoms.”

The problem is that while Ebola may be a killer, a potentially greater threat to Sierra Leoneans and West Africans in general lies in less spectacular diseases. During the current outbreak of Ebola, other diseases are quietly taking their toll. Malaria is still rampant, and there is concern that cholera, which usually attacks during this period of the rains, will resurface to claim more lives.