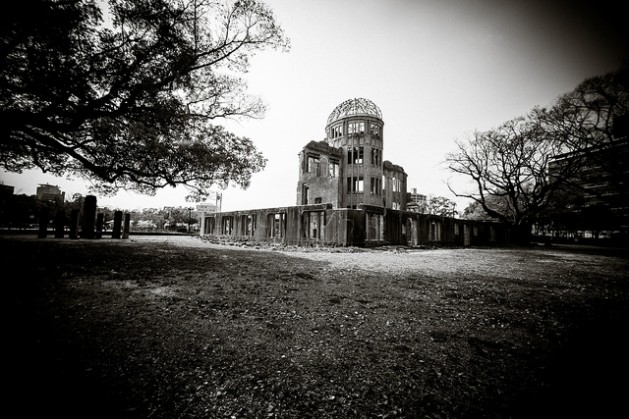 As foreign dignitaries descended on Japan to mark the 69th anniversary of the atomic bombing Wednesday, the message from officials in the city of Hiroshima was one of urgent appeal to governments to seriously consider the enormous threat to humanity and the planet of another nuclear attack.

Survivors, known here as hibakusha, who have worked tirelessly since August 1945 to ban nuclear weapons worldwide, urged diplomats – including ambassadors from four of the nine nuclear weapons states (United States, Israel, Pakistan and India) – to heed the words of the 2014 Peace Declaration.

Representing the anguished wishes of aging survivors and peace activists, the declaration calls on policy makers to visit the bomb-scarred cities to witness first-hand the lasting devastation caused when the U.S. dropped its uranium bomb (Little Boy) on Hiroshima and its plutonium bomb (Fat Man) on Nagasaki three days later.

The Center for Arms Control and Non Proliferation reported earlier this year that the nine nuclear weapons states possessed a combined total of 17,105 nuclear weapons as of April 2014.
Some 45,000 people observed a minute of silence Wednesday in a peace park close to the epicenter of the bomb, which killed an estimated 140,000 people in Hiroshima before the second bomb claimed a further 70,000 lives in Nagasaki.

The tragic events came as Japan was negotiating its surrender in World War II (1939-45).

The presence of so many survivors, whose average age is estimated to be 79 years, provided stark evidence of the debilitating physical and psychological wounds inflicted on those fateful days, with many hibakusha and their next of kin struggling to live with the results of intense and prolonged radiation exposure.

In a tribute to their suffering, the Hiroshima Peace Declaration states, “We will steadfastly promote the new movement stressing the humanitarian consequences of nuclear weapons and seeking to outlaw them.

“We will help strengthen international public demand for the start of negotiations on a nuclear weapons convention with the goal of total abolition by 2020,” the declaration added.

But the likelihood of this dream becoming a reality is dim, with the Center for Arms Control and Non-Proliferation in Washington reporting earlier this year that the nine nuclear weapons states possessed a combined total of 17,105 nuclear weapons as of April 2014.

The United States, the only state to deploy these weapons against another country, has steadfastly held out on issuing an official apology, claiming instead that its decision to carry out the bombing was a “necessary evil” to end World War II.

This argument is now deeply entrenched in global geopolitics, with states like Israel – not yet a signatory to the Nuclear Non-Proliferation Treaty (NPT) – vehemently protecting its arsenal as essential for national security in the face of protracted political tensions in the region.

Following Israel’s military offensive in Gaza, which resulted in 1,800 civilian casualties in the Palestinian enclave before a ceasefire brokered by Egypt came into effect Tuesday, some in the Arab community insist that Israel represents the biggest security threat to the region, and not vice versa.

China, a nuclear state with an inventory of 250 warheads and currently embroiled in a territorial dispute with Japan, was conspicuously absent from the proceedings.

Professor Jacob Roberts at the Hiroshima Peace Research Institute told IPS, “The call is to ban nuclear weapons that kill and cause immense suffering of humans. By possessing these weapons, nuclear states represent criminal actions.”

He said the anti-nuclear movement is intensely focused on holding states with nuclear weapons accountable for not abiding by the 1968 NPT.

He cited the example of the Mar. 1 annual Remembrance Day held in the Pacific Ocean nation of the Marshall Islands, which suffered devastating radiation contamination from Operation Castle, a series of high-yield nuclear tests carried out by the U.S. Joint Task Force on the Bikini Atoll beginning in March 1954.

Thousands fell victim to radiation sickness as a result of the test, which is estimated to have been 1,000 times more powerful than the Hiroshima blast.

In total, the U.S. tested 67 bombs on the territory between 1946 and 1962 against the backdrop of the Cold War-era nuclear weapons race with Russia.

In a bid to challenge the narrative of national security, the Marshall Islands filed lawsuits this April at the International Court of Justice in The Hague, and separately in U.S. Federal District Court, against the nine nuclear weapon states for failing to dismantle their arsenals.

The lawsuits invoke Article VI of the Nuclear Non-Proliferation Treaty (NPT), which contains a binding obligation for five nuclear-armed nations (the U.S., UK, France, China and Russia) “to pursue negotiations in good faith on effective measures relating to cessation of the nuclear arms race at an early date and to nuclear disarmament.”

As in Hiroshima, the United States has not apologized to the Marshall Islands but only expressed “sadness” for causing damage. A former senator from the Marshall Islands, Abacca Anjain Maddison, told IPS, “The U.S. continues to view the disaster as ‘sacrificing a few for the security of many’.”

The U.S. is not the only government to come under fire. Hiromichi Umebayashi, director of the Research Center for Nuclear Weapons Abolition (RECNA) at Nagasaki University, is a leading advocate for a nuclear-free zone in East Asia and a bitter critic of the administration of Japanese Prime Minister Shinzo Abe, which is alleged to be currently pushing the argument that nukes are necessary for national security.

Umebayashi is spearheading a campaign to stop Japan’s latest decision to work closely with the United States, under a nuclear umbrella, on strengthening the country’s national defence capacities.

“North Korea’s nuclear threat in East Asia is used by the Japanese government to push for more military activities. As the only nation to be atom bombed, Japan is making a huge mistake,” the activist told IPS.