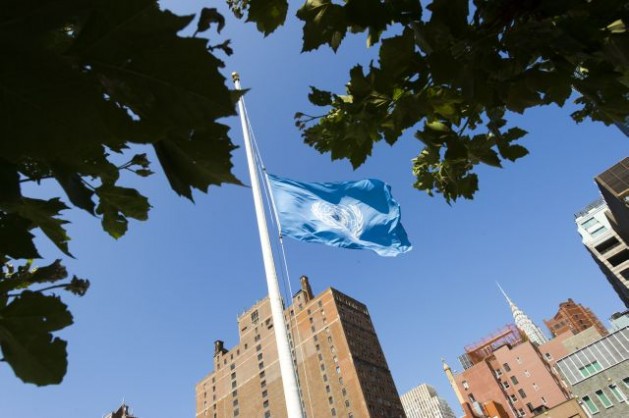 The U.N. flag flies at half-mast in memory of staff killed during the most recent Israeli air strikes in Gaza. Credit: UN Photo/Mark Garten

UNITED NATIONS, Aug 20 2014 (IPS) - The United Nations was founded “to save succeeding generations from the scourge of war” and to reaffirm faith in fundamental human rights.

To meet that objective, the Preamble of the U.N. Charter provides “to establish conditions under which justice and respect for the obligations arising from treaties and other sources of international law can be maintained”.

Since the Second World War, these good and evil countries have waged hundreds of wars in which nearly 50 million people have been killed, tens of millions made homeless, and countless millions injured and bereaved.

The United Nations has played a major role in defining, codifying, and expanding the realm of international law – which defines the legal responsibilities of states in their conduct with each other, and their treatment of individuals within state boundaries.

Historically, violators of international law are not only the countries branded as evil and belligerent but also countries that preach democracy and human rights. That undermines the efforts of the United Nations to maintain law and order.

Since the Second World War, these good and evil countries have waged hundreds of wars in which nearly 50 million people have been killed, tens of millions made homeless, and countless millions injured and bereaved. No part of the world has escaped the scourge of war. The countless mechanisms enshrined in the U.N. Charter to resolve conflicts by peaceful means have been rendered useless.

Let’s forget Hiroshima, Vietnam, Korea and a few other major disasters. Let’s look at what happened after the Cold War ended in 1989, and the Soviet Union collapsed in 1991 – leaving the United States as the only superpower.

The mass murders in Rwanda and Sudan proved that neither the United Nations nor superpowers wished to intervene. Wars in the Balkans, and fragmentation of Yugoslavia and Czechoslovakia are now forgotten history.

The U.S. and NATO authorised bombings in Kosovo and Serbia in the 1990s. The Arab Spring in Tunisia, Egypt, Libya and Yemen is over. International law was violated in all these instances, and these countries now are in disarray.

The United States has been criticised for turning away from internationalism by abandoning the Kyoto Protocol, ignoring the Comprehensive Nuclear Test Ban Treaty, repudiating the Biological Weapons Convention, repealing the Anti-Ballistic Missile Treaty, refusing to sign the Treaty establishing the International Criminal Court, and condoning the continued Israeli violence against Palestinians in occupied territories.

In 2011, following the 9/11 attacks, the Bush administration embarked on a strategy of unilateralism, disregarding the U.N. and international law. Worst of all is its military strategy of “pre-emptive strikes” which defies the U.N. Charter by allowing the U.S. to use illegal force against other states.

Despite U.N. opposition, the Bush administration took a series of unilateral actions. The most damaging was the war in Iraq waged on bogus claims of weapons of mass destruction (WMD), and the war in Afghanistan.

After a decade of devastation, the expectations of democracy, freedom and human rights have vanished – and there are no winners in these wars despite continuing mayhem and casualties.

U.S. President Barack Obama revealed that the two wars have cost U.S. taxpayers over one trillion dollars. A study by American researchers (including Noble Laureate Joseph Stieglitz and experts from Harvard and Brown), estimate that the costs could be in the range of three to four trillion.

A major challenge to international law today is the U.S. policy of using aerial drones to carry out targeted killings.

The American Civil Liberties Union (ACLU) estimates that as many as 4,000 people have been killed in U.S. drone strikes since 2002 in Pakistan, Yemen and Somalia. Of those, a significant proportion were civilians.

“Ironically, the drone strikes could actually be classified as ‘international terrorism’, since they appear to have been often intended to coerce the civilian population and to influence the Pakistani government.”

Another major obstacle to peace in the Middle East and world security is the Israeli Occupation and expansion of settlements in occupied territories – acts that undermine International Law.

According to Article 49 of the Fourth Geneva Convention — to which both Israel and the United States are signatories — prohibits any occupying power from transferring “parts of its own civilian population into the territory it occupies.”

Also, a landmark 2004 decision by the International Court of Justice confirmed the illegality of the Israeli settlements.

Since 1948, the U.N. has passed scores of resolutions declaring that all Israeli settlements outside of Israel’s internationally recognised borders are illegal but they have been blatantly ignored by Israel.

Condemning the recent Israeli attacks on homes, schools, hospitals, and U.N. shelters in Gaza that killed thousands of innocent civilians – a gross violation of the Geneva Conventions – U.N. High Commissioner for Human Rights Navi Pillay said that “Israel was deliberately defying international law in its military offensive in Gaza and that world powers should hold it accountable for possible war crimes.”

Pillay said she was appalled at Washington consistently voting against resolutions on Israel in the Human Rights Council, General Assembly and Security Council.

Another inconspicuous violation is the application of “Responsibility to Protect” (R2P) approved by the U.N., in 2005, which is now subtly used for regime changes.

The U.S. and NATO invoked R2P for military intervention in Libya on the pretext of a “no-fly zone” but ended in regime change. Today Libya is fragmented and is in the hands of rebels, forcing United States to evacuate its embassy staff and other foreign personnel in Libya.

The U.S. attempted to invoke the R2P mechanism in Syria even though there was no proof that the Assad regime killed its own people with chemical weapons.

President Obama was about to wage a war against Syria when a last-minute solution was found by the Russians to avert the war by removing Assad’s chemical weapons.

But the U.S. and its allies showed no interest in invoking R2P in the case of Darfur or in Israeli aggression against Palestinians in Gaza, where over 2,000 civilians were killed.

And no one is screaming to invoke R2P in East Ukraine despite the fact that already over 2,000 Ukrainians have been killed by Ukrainian military forces.

The United Nations has not played a fair role when invoking the Responsibility to Protect.

In 2002, the International Criminal Court (ICC) was established with a mandate to consider genocide, war crimes, crimes against humanity and the crime of aggression. But it is unfortunate that ICC mainly focuses on criminal cases in Africa, without looking at so many breaches of the law elsewhere.

The United States is not a signatory to the ICC but it cannot escape from the International Court of Justice (ICJ) where cases can be initiated by one state against another.

Actions of many powerful countries prove that they are sticking to the Rule of Power instead of enhancing the Rule of Law.

For over 200 years, America has been a devout apostle of equality and freedom – defending peace, democracy, justice and human rights. It is in this sense that a few former U.S. presidents believed in peace and not war.

President Truman said, “The responsibility of the great states is to serve and not dominate the peoples of the world” and President Kennedy said, “Mankind must put an end to war or war will put an end to mankind.”

It is inconceivable that America, today, with its democratic history and unrivaled power, constantly violates international law instead of morally guiding the world towards peace, justice and prosperity.

Such actions not only erode the prestige of the United States and violate the U.N. Charter, but also undermine the effectiveness of the United Nations.

Somar Wijayadasa is a former Representative of UNAIDS at the United Nations.