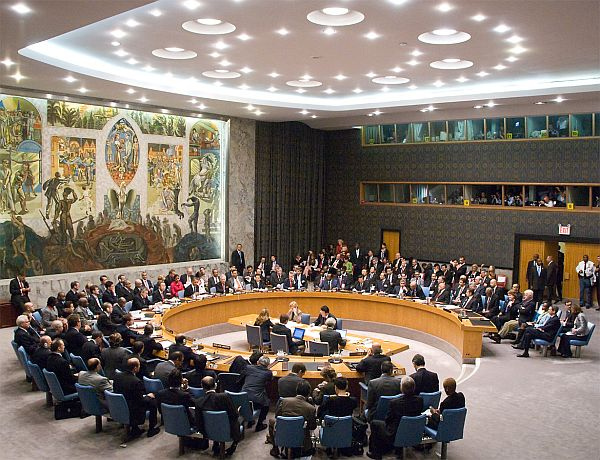 A proposal for a nuclear weapons-free zone (NWFZ) in the strife-torn Middle East remains in limbo. Credit: Bomoon Lee/IPS

But United Nations Secretary-General Ban Ki-moon, a relentless advocate of nuclear disarmament, is determined to resurrect the proposal.

“I remain fully committed to convening a conference on the establishment of a Middle East zone, free of nuclear weapons and all other weapons of mass destruction,” he said in his annual report to the upcoming 69th session of the General Assembly, which is scheduled to open Sep. 16.

Ban said such a zone is of “utmost importance” for the integrity of the nuclear non-proliferation treaty (NPT).

Still, the widespread political crises in the Middle East – destabilising Iraq, Syria, Libya, Yemen and Palestine – may threaten to further undermine the longstanding proposal for a nuclear weapons-free zone in the militarily-troubled region.

If it does not, it could jeopardize the review conference itself, according to anti-nuclear activists.

Finland, which has taken an active role in trying to host the conference, has been stymied by implicit opposition to the conference by the United States, which has expressed fears the entire focus of the meeting may shift towards the de-nuclearisation of one of its strongest Middle East allies: Israel.

Hillel Schenker, co-editor of the Jerusalem-based Palestine-Israel Journal, told IPS while it would appear that the recent Gaza-Israel war might have created additional problems for the convening of the conference, it actually opens new opportunities for progress.

Egypt played a key role as the host and major facilitator of the negotiations to arrive at a cease-fire, and Cairo remains the hub for the follow-up negotiations for dealing with the issues not dealt with in the initial cease-fire agreement, he said.

In the course of the current tragic round of mutual violence, he pointed out, there was a perception that a common strategic interest has evolved between Egypt, Israel, Jordan, Saudi Arabia, the Gulf States and the Palestinian Authority led by President Abbas, against Hamas, which spills over to the threat from the Islamic fundamentalist forces that are active in Iraq and Syria.

Such a development would require initiatives beyond a cease-fire, and the resumption of serious negotiations to resolve the entire Israeli-Palestinian conflict, he added.

Bob Rigg, a former chair of the New Zealand National Consultative Committee on Disarmament, told IPS there have already been many attempts at a conference on the weapons-free zone.

“All have come to nothing, principally because a regional nuclear weapons-free zone would pre-suppose the destruction, under international control, of Israel’s nuclear arsenal.”

The acquisition of a nuclear weapons capability was a key priority of Ben Gurion, Israel’s first leader, and has continued to be at the heart of its security policies ever since, said Rigg, an anti-nuclear activist and a former senior editor at the Organisation for the Prohibition of Chemical Weapons (OPCW).

He said while the government of Israel continues to be unwilling, in any context, to formally admit to the possession of nuclear weapons, there is no basis for any meaningful discussion of the issue, even if a conference actually takes place.

“Western governments which helped Israel to go nuclear compound the problem, participating in this conspiracy of silence by never mentioning Israel’s nuclear weapons.”

For example, he said, former U.S. President Jimmy Carter was once ferociously attacked by U.S. politicians and the media for saying that Israel had nuclear weapons.

Alice Slater, New York Director of the Nuclear Age Peace Foundation who also serves on the coordinating committee of Abolition 2000, told IPS that U.N. chief Ban quite correctly raised a serious warning last week about the future viability of the NPT in the absence of any commitment to make good on a pledge to hold a conference to address the formation of a Middle East Zone free of nuclear weapons and other weapons of mass destruction.

The NPT took effect in 1970 providing that each of the Parties to the Treaty undertakes to pursue negotiations in good faith on effective measures relating to cessation of the nuclear arms race at an early date and to nuclear disarmament, and on a treaty on general and complete disarmament under strict and effective international control, she pointed out.

All but three nations in the world signed the treaty, including the five nuclear weapons states (UK, Russia, the United States, France, China).

Only India, Pakistan, and Israel refused to join the treaty and went on to acquire nuclear arsenals.

North Korea, taking advantage of the treaty’s unholy bargain for an inalienable right to so-called peaceful nuclear power, acquired the civilian technology that enabled it to produce a bomb, and then walked out of the treaty, said Slater.

The NPT was set to expire in 25 years unless the parties subsequently agreed to its renewal.

Schenker told IPS that without active American involvement, the conference will not be convened.

Whatever the outcome of the mid-term elections in November, President Barack Obama will then have two more years to establish his presidential legacy, to justify his Nobel Peace Prize and to advance the vision he declared in his 2009 Prague speech of “a world without nuclear weapons”.

He said the U.N. secretary-general issued a timely warning that a failure to convene the Mideast weapons-free-zone conference before the 2015 NPT review conference “may frustrate the ability of states to conduct a successful review of the operation of the (NPT) treaty and could undermine the treaty process and related non-proliferation and disarmament objectives.”

He said one of the primary tools that could be used to advance this process is the Arab Peace Initiative (API), launched at the Arab League Summit Conference in Beirut in 2002, which has been reaffirmed many times since.

The API offers Israel recognition and normal relations with the entire Arab world, dependent upon the end of the occupation and the establishment of a Palestinian state in the West Bank, Gaza and East Jerusalem, alongside the State of Israel.

He said the API could also be a basis for establishing a new regional regime of peace and security.

The convening of the international conference mandated by the 2010 NPT Review Conference, if approached with diplomatic wisdom on all sides, could become one of the components of progress towards this new regional regime of peace and security, he noted.

The new strategic “alliance” in the region could be used as a basis for the convening of the conference, said Schenker.

A successful outcome of the negotiations over the Iranian nuclear programme could be another constructive building block towards the convening of the conference.

Slater told IPS the prospects for any success at this upcoming 2015 NPT Review, are very dim indeed and it is unclear what will happen to the badly tattered and oft-dishonored treaty.

“It is difficult to calculate whether the recent catastrophic events in Gaza and Israel will affect any change in Israel’s unwillingness to participate in the promised Middle East conference.”

All the more reason to support the efforts of the promising new initiative to negotiate a legal ban on nuclear weapons, just as the world has banned chemical and biological weapons, she declared.