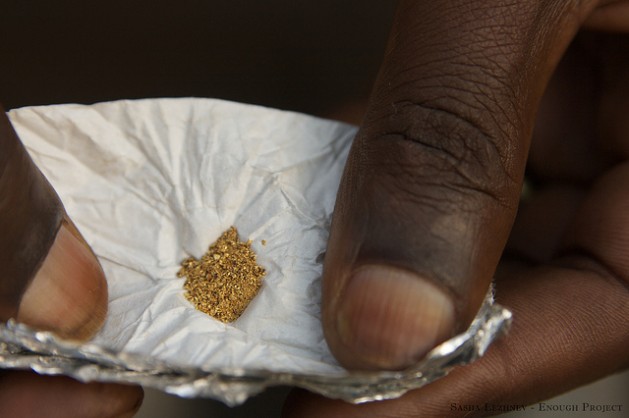 Gold from eastern Congo. The war in Congo is fueled by a thriving gold trade today, with armed groups controlling mines and earning an estimated 50 million dollars last year from selling gold and minerals. This gold is from a day's work at Kaniola mine. Credit: ENOUGH Project/cc by 2.0

WASHINGTON, Nov 25 2014 (IPS) - Major U.S. jewellery companies and retailers have started to take substantive steps to eliminate the presence of “conflict gold” from their supply chains, according to the results of a year-long investigation published Monday.

Rights advocates, backed by the United Nations, have been warning for years that mining revenues are funding warlords and militia groups operating in the Great Lakes region of Africa, particularly in the eastern part of the Democratic Republic of the Congo (DRC). In 2010, such concerns resulted in landmark legislation here in the United States aimed at halting this trade, and those laws have since spurred similar legislative proposals in the European Union and Canada.

“Just a few years ago, jewellery companies were pretty resistant to making progress on this, but today there is clearly interest in supporting peace and finding out more about the role they can play in this issue." -- Holly Dranginis of Enough Project

Three of the most problematic of these “conflict minerals” – tin, tantalum and tungsten, collectively known as 3T – are used primarily by the electronics industry. In recent years, that sector has made notable progress in certifying and otherwise regulating its use of these materials.

Yet forward movement has been slower on the fourth conflict mineral from the Great Lakes region – gold.

“Over two-thirds of the eastern Congo’s 3T mines are conflict-free today,” a new report from the Enough Project, a Washington-based watchdog group, states.

“Gold, however, remains a major financial lifeline for armed actors. Ninety-eight percent of artisanally mined gold … is smuggled out of the country annually, and much of that gold benefits armed commanders.”

Last year, the report estimates, some eight to ten tons of gold were smuggled out of eastern DRC. That would have been worth more than 400 million dollars.

Much of this smuggling is thought to take place through Congo’s neighbours, particularly Uganda and Burundi, and onwards to Dubai. From there, most of this gold is able to anonymously enter the global marketplace.

The jewellery industry, meanwhile, is the largest user of global gold supplies, constituting slightly less than half of worldwide demand. “Conflict gold thus taints the industry as whole,” the report warns.

According to the Enough Project’s new rankings, however, the industry is starting to respond to these concerns. Researchers looked at both past and pledged actions by 14 of the largest jewellery companies and retailers in the United States – part of an industry worth some five billion dollars a year – and found a spectrum of initiatives already underway.

On the one hand, some companies appear to have undertaken no conflict minerals-related initiatives whatsoever, at least as far as the new report’s metrics were concerned. Three companies scored zero points, while others – including major retailers such as Walmart, Sears and Costco – scored very low.

On the other hand, the researchers found a few key companies that have undertaken particularly notable responses. They say there is reason to believe that these leaders could now influence the rest of the industry.

“We really wanted to focus on the leading jewellery retailers in the U.S. because of their leverage over the industry – we wanted to take lessons from our experience with the electronics industry, that leading companies can move an entire industry,” Holly Dranginis, a policy analyst with the Enough Project and the lead author on the new report, told IPS.

“Just a few years ago, jewellery companies were pretty resistant to making progress on this, but today there is clearly interest in supporting peace and finding out more about the role they can play in this issue. We found two very clear leaders among the 14.”

Those are two of the most recognizable jewellery brands and retailers in the world, Signet Jewelers and Tiffany & Co. Three others highlighted for recognition in the rankings are the commercial retailers J.C. Penney Company, Target Corp. and Cartier.

The Enough Project researchers sent a broad questionnaire to these companies, and Signet and Tiffany received the highest overall rankings. Yet Dranginis notes that what differentiates these companies is merely the fact that they have put in place policies around the sourcing of gold from the Great Lakes region.

Perhaps more importantly, these companies have also started engaging on the ground in countries such as the DRC. Over the past three years, for instance, Signet has pledged to continue sourcing certified gold from the country, rather than simply moving on to another country entirely. The company is also making its sourcing strategies open to others in the industry.

“We see our involvement in industry guidance and standards in the gold sector and the development and implementation of the Signet Responsible Sourcing Protocols as part of a broader initiative of ensuring responsible business practices through the entire jewellery supply chain, for gold and for all other materials,” David A. Bouffard, a vice president for Signet Jewelers, told IPS in a statement.

“It is important to us that our SRSPs are open public protocols which can be used by anyone in our industry, and which Signet’s suppliers can use to their benefit in their relationships with other customers.”

Tiffany, meanwhile, is making a concerted effort to assist local communities, particularly small-scale miners and their families. Both companies reportedly have individual executives that have taken a particular interest in the issue.

“One of the concerns has been that compliance with [U.S. conflict minerals laws] has pushed some companies to think they should leave the region and source elsewhere,” the Enough Project’s Dranginis says.

“Supporting community initiatives in the region is critical, because a lot of communities are affected by major market changes. We also need to ensure that gold miners and their families are supported in a comprehensive way, looking into sustainable projects, alternative livelihoods, financial inclusion and related issues.”

Action by major brands is, of course, a key component in driving the global response to the impacts of conflict gold. Yet an important collection of multistakeholder and trade mechanisms has also sprung up in recent years, directly facilitating these initiatives.

Central to any attempt at tracking and regulating raw commodities, for instance, is a system of certification. And just as the electronics industry has been able to use metals smelters as an important lynchpin in this process, so too has the gold industry been able to start certifying gold refiners.

According to the new report, in 2012 just six gold refiners had been certified as “conflict free” by one such initiative, the Conflict Free Smelter Program. Two years later, that number has risen to 52 – though “there are still many refiners outside the system,” the study notes.

Advocates are also calling for stepped-up and coordinated action by governments. While the United States, European Union and Canada could all soon have legislation on the use of conflict minerals, some are increasingly pushing for action from the government of the United Arab Emirates aiming to constrict the flow of conflict gold through Dubai.

Likewise, India, Pakistan and China are among the most prominent consumers of gold worldwide, and thus constitute key sources of demand.