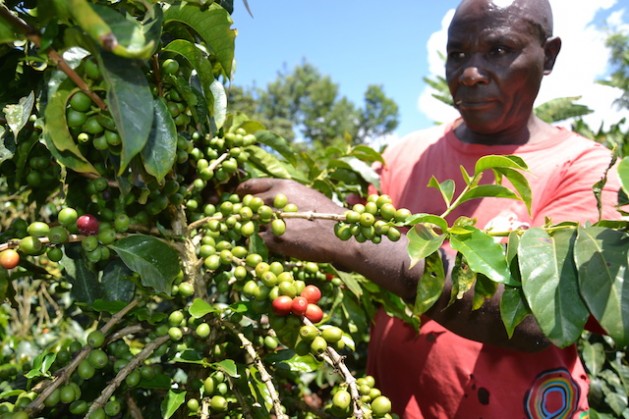 Gabriel Kimwaki on his coffee farm in Nyeri County, central Kenya. Agriculture is still the backbone of the economy even when many small-scale farmers continue to receive minimal returns. Credit: Miriam Gathigah/IPS

He told IPS that the returns are too low “and with every harvesting season, I am making less and less profit.”

His is not a unique story. Francis Njuguna, an agricultural extension officer in the area, told IPS that while it is still difficult to quantify, “more farmers are shifting to food crops. The cash crop business is proving to be too risky for small-scale farmers.”

Kenya was reclassified as a middle-income country in early October, but as this East African comes to terms with its new ranking, it is becoming clear that status alone will not result in fewer people going to sleep hungry.

There is still a great need to address the plight of Kenya’s poor, as agriculture remains the backbone of the economy.

According to the Kenya National Bureau of Statistics, based on a five-year average from 2009 to 2013, the agricultural sector’s contribution to the GDP is now estimated at 25.4 percent — up from 24.1 percent.

Economic analyst Jason Braganza told IPS that “the move to middle-income status was as a result of using better data from high-performing sectors.”

The sectors include agriculture, telecommunication, real estate and manufacturing — the latter sector’s contribution to GDP has risen from 9.5 percent to 11.3 percent, according to Braganza.

What the revised GDP revealed, Braganza said, “is that the country is worth much more than what was previously recorded.”

The country’s GDP is now estimated at 53.4 billion dollars compared to 42.6 billion dollars before the revision, making Kenya the ninth-largest economy in Africa, up from the 12th position.

While this has been hailed as a move in the right direction for a country that remains East Africa’s strongest economy, policy analyst Ted Ndebu told IPS that this does not mean that Kenya is “rich and that it has risen above its social economic challenges.”

World Bank statistics show that more than four out of 10 Kenyans live in poverty. The country has a population of 44.3 million. With an economic growth rate of 5.7 percent, Ndebu said that the country “is still a long way off from a double-digit growth rate of at least 10 percent as outlined in the Vision 2030, the country’s economic blueprint.”

Braganza explained that revising the GDP or rebasing the economy is a purely “statistical exercise. It provides a better understanding of the economy but in itself, it does not change people’s poverty status.”

But he added that based on the new statistics, “the government has a better understanding of which sectors are driving the growth of the economy. But it does not mean that fewer people are sleeping hungry.”

He said that economic growth alone would not eliminate poverty.

“Growth must be accompanied by development. It is development that reduces poverty because it addresses issues like access to education, health services, jobs and so on,” Braganza said.

He explained that there were many factors that were not captured in statistics and income bracketing is not always a true representation of the people’s well being. “That is why household surveys are important. They show you the conditions under which people are living.”

Braganza added that this did not mean that rebasing the economy was not important. “It is very significant because the findings can be used to boost development and improve people’s living standards.”

The government would also be able to see which sectors can potentially bring in revenue, and tax them accordingly, thereby exploiting the potential that each sector has to the fullest.

But Ndebu said this could have a downside effect if the sectors are taxed too heavily and could discourage investment and innovation particularly in the telecommunication industry which pioneered mobile payments technology.

But this is not the only implication. Kenya could also be overlooked by donors.

Jason Lakin, the country manager at International Budget Partnership Kenya, told IPS that donors have in recent years focused on the poorest countries and a middle-income country may not be prioritised for funding.

“Kenya may not find donor financing as attractive when the interest rates are higher and repayment periods shorter because it has now shown that it can borrow internationally,” said Lakin.

While market rate borrowing may still have higher rates than donor financing, experts say that donor funding usually has other conditions, making it less attractive for a country with other options.

Lakin said that international bond markets for instance “only want to be repaid and do not impose any conditions.”

Although Kenya is not an aid-dependent country since aid accounts for only seven to 10 percent of the national budget, Braganza said that “we still cannot undermine the importance of [aid] because it finances key sectors such as health, agriculture and education.”

“Donor aid is very significant because it is used in social sectors where people are in very severe poverty conditions,” he said.

Ndebu added that there was also aid that does not go through the national budget but through non-government organisations, which significantly complemented government projects.