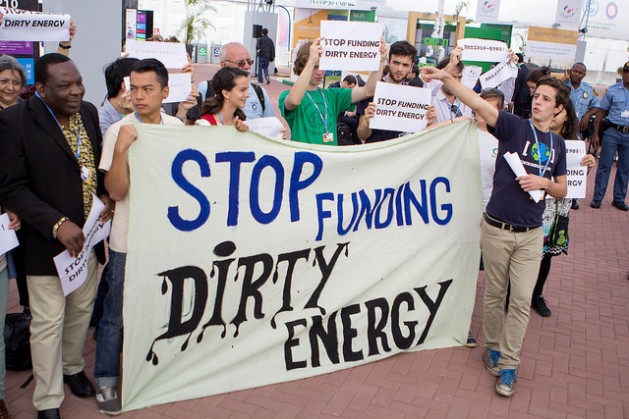 LIMA, Dec 8 2014 (IPS) - Packed into stifling meeting rooms in the Peruvian capital, delegates from 195 countries are trying to find a path that would make it possible for the planet to reach climate neutrality in the second half of this century – the only way to avoid irreversible damage, scientists warn.

Climate neutrality is defined as no net greenhouse gas (GHG) emissions, achieved by minimising emissions as much as possible, so an equivalent amount is sequestered or offset. The term climate neutral, rather than carbon neutral, is used to reflect the fact that it is not just carbon dioxide (CO2) that is causing climate change but other greenhouse gases as well.

To reach climate neutrality it is essential to accelerate the transition from a fossil fuel-based economy to one that employs renewable energies.

As the COP20 climate summit hosted by Lima Dec. 1-12 approaches the end, the number of developing countries accepting the proposal to set a climate neutral goal – also known as “net zero” – for 2050 is growing.

“The scientific data are more and more alarming,” said Giovanna Valverde, president pro tempore of the Association of Independent Latin American and Caribbean states (AILAC), a regional group of governments of middle-income countries that are negotiating as a bloc in the 20th session of the Conference of the Parties (COP20) to the United Nations Framework Convention on Climate Change (UNFCCC).

“The coordinator of the IPCC (Intergovernmental Panel on Climate Change) showed us the data in the plenary session, and indicated the urgency we are facing. If we set a goal for 2050 it’s so that everyone can join in, but the numbers are alarming,” she told IPS.

The question of climate neutrality became a key focus of debate in the first week of the conference, but there is a long way to go before it takes shape as a concrete commitment by the international community, to guarantee the transition to a clean economy.

A report by the British Overseas Development Institute found that the industrial and emerging powers of the Group of 20 (G20) continue to invest some 88 billion dollars a year in fossil fuel subsidies, rather than using that money to boost renewable energies.

Moreover, the power and lobbying of the fossil fuel industry can be felt at COP20, where the agenda even includes events organised by multinational oil companies like the Anglo-Dutch Shell, on Monday Dec. 8. 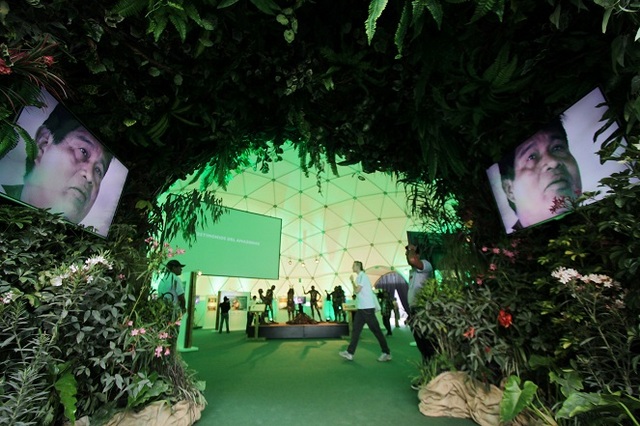 Hopes for a greener world came to life at the COP20 installations in the Peruvian capital. Credit: COP 20

Valverde, from Costa Rica, said the key is for “countries to seriously commit to providing information for emission reduction contributions so scientists will have time between 2015 and 2020 to compare methodologies used by different countries, do the math, and define how much more has to be reduced.”

AOSIS called for the planet to reach zero emissions in 2100, which would mean the total elimination of fossil fuels, as recommended by the IPCC in its latest report, released Nov. 2. Countries like Poland, a leading coal producer, announced their rejection of that initiative.

The opposition mounted by countries dependent on fossil fuels is hindering the expansion and growth of clean energies. The European Union, for example, has not agreed on a long-term target within the bloc, nor is it sure that it will back the climate neutrality proposal presented by the UNFCCC and supported by developing countries.

“The goal is part of the mitigation debate and that is still on the table,” one of the EU negotiators, Elina Bardram, told IPS. “It’s important that by the time we get to Paris we have a shared view on where we should go,” she added, referring to the COP21, to be held in the French capital in November 2015.

“That will tell us which is the ambition for a low -carbon future. We don’t have a fixed view on the long-term goal, but of course we have been taking note of the reasons by the IPCC and other scientific bodies.”

A new binding global climate treaty is to be signed in Paris, to replace the Kyoto Protocol as of 2020.

But now in Lima the negotiators must hammer out the form of what many consider the heart of the future treaty: national contributions.

The contributions include each nation’s commitment to reducing emissions, including how much and when. The sum of all the contributions should be sufficient to ward off irreversible effects from climate change.

To achieve that, developing countries and civil society in the South as well as the industrialised North are proposing a mix of reducing incentives for fossil fuels; reforestation; improved agricultural techniques; and investment in renewable energies.

Although the countries are to officially report their contributions between March and June 2015, some have already made announcements.

On Nov. 12, in a joint announcement in Beijing, the United States promised to cut its emissions 26 to 28 percent by 2025 from 2005 levels, and China said it would make its “best effort” to peak emissions before 2030 and later reduce them.

But scientific studies warn that more ambitious steps and faster progress are needed.

In the Adaptation Gap Report 2014 published Nov. 19, UNEP assessed the difference between the current measures taken by countries and what would be needed to prevent severe irreversible damage from climate change.

“This report makes it clear that at some point in the second half of the 21st century we will have to achieve climate neutrality, or as some call it, net zero, in terms of global emissions,” said Christiana Figueres, the executive secretary of the UNFCCC.

According to the study, global emissions should peak in the next 10 years, followed by actions to adopt more clean energy and reduce the use of fossil fuels.

So far, the delegates in Lima have postponed the review of the pre-2020 emissions cuts, as they are caught up in procedural struggles.

Now the countries are running the risk of failing to reach agreement on the actions needed to reduce emissions to keep the average temperature increase below 2 degrees Celsius – although there are even voices warning that the increase should be lower in order to prevent irreversible effects.

“Our position is that the increases in temperature can’t go beyond 1.5 degrees. That would be too harmful for countries like ours,” Ram Prasad of Nepal, the chair of the LDC (Least Developed Countries) group, told IPS.

Climate action is urgent because with each years that goes by, the situation is becoming more and more complicated for the most vulnerable countries, mainly the world’s poorest nations, which makes climate change a deeper problem of inequality, he added.

The UNEP report concluded that to adapt to climate change, the world would need nearly three times more than the 70 to 100 billion dollars a year estimated up to now.