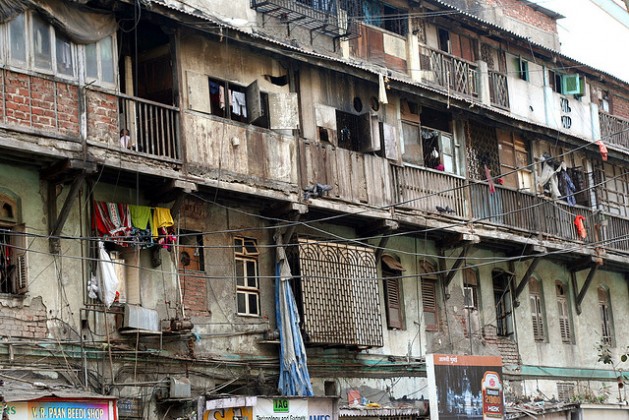 The view from a red-light district in India, where some three million sex workers are caught in the middle of a debate on legalisation. Credit: bengarrison/CC-BY-SA-2.0

A contentious debate over the sex trade in India, following a call for legalisation by the National Commission for Women (NCW) – a state-run body that advises the government on women-related policy matters – has Devi worried.

“In wealthier countries, many women genuinely choose this trade due to better income prospects and opportunities. But in India, every woman who enters this trade has invariably been coerced into it by a trafficker, her family or her husband." -- Sarita, a 43-year-old sex worker in New Delhi
She feels that merely issuing licences or permits to people of her ilk will not lead to the improvement of the unhealthy and, at times, dangerous conditions under which commercialised prostitution functions.

According to U.N. reports, about 70 percent of sex workers in India are abused by their clients and the police. Abuse, say activists, is often under-reported by sex workers due to a lack of knowledge of their basic rights.

“Most of us don’t take to the flesh trade out of choice but are sold by criminal mafias to brothels. The move to regulate our business will only end up giving immunity to the pimps and brothels to buy or sell poor women like us while increasing trafficking of young women and children,” Devi told IPS.

A recent study conducted by the Indian philanthropic non-profit Dasra found that roughly half of trafficking victims are adolescent girls, while the average age of sex workers has dropped from 14-16, to 10-14, “because young girls are believed to have a lower risk of carrying a sexually transmitted disease”.

“Most victims come from rural areas, over 70 percent are illiterate, and almost half reported that their families earned just about one dollar [per day],” the report stated.

Other studies have found that most sex workers in India are form the lower castes, communities that are routinely subjected to violence and exploitation in a highly stratified society.

It is unsurprising, then, that scores of women trapped in the trade remain highly opposed to legalization.

Sarita, 43, another sex worker, feels that while there may be a sound argument for legalisation in richer countries like the USA, or even China, such a system is ill-suited to India.

“In wealthier countries, many women genuinely choose this trade due to better income prospects and opportunities. But in India, every woman who enters this trade has invariably been coerced into it by a trafficker, her family or her husband,” she asserted. “So the dynamics of our society are very different.”

A 2014 study, ‘Economics Behind Forced Labour Trafficking’, spearheaded by Indian Nobel Peace Prize-winner Kailash Satyarthi, contains some of the most up-to-date data on the flourishing sex trade.

“The figures are shocking…In India alone, the money generated through [the] sex trade so far stands at a whopping 343 billion dollars. Research confirms that several agencies such as traffickers, brothel owners, money lenders, law enforcement officials, lawyers, judiciary and to a certain level even the victims of CSE (commercial sexual exploitation) eventually receive money for participation,” Satyarthi said in the study.

With the legalisation debate gaining traction, public opinion in India is also splintered over the issue. Those who favour the move feel that it will whittle down harassment, legal intimidation, entrapment and exploitation of sex workers.

NCW Chairperson Lalitha Kumaramangalam, who set the ball rolling with her suggestion that the trade be brought under state control last month, feels that such a step will ensure better living conditions for women engaged in commercial sex work.

She contends it will reducing trafficking of both girls and women and improve the health conditions of sex workers who are presently forced to serve clients in unhygienic conditions and without condoms, which has caused HIV and other sexually transmitted diseases to spread.

In fact health care experts extend some of the strongest arguments in favour of legalising prostitution, or regulating it. They feel that the rapid spread of HIV/AIDS across the world, especially in Asia and Africa, can be checked by bringing the business under the state umbrella as this will help health workers to better educate those in the trade about condom usage and basic hygiene.

Opponents of legalisation, however, are wary of the consequences of adding layers of regulation to India’s massive bureaucracy. They fear that government intervention could trigger harassment of the very people it seeks to protect.

“Legalising prostitution is legalising the profiteers of the sex-industry and their customers,” Ranjana Kumari, director for the New Delhi-based think tank Centre for Social Research, told IPS.

“It means rape of poor, lower-caste women with impunity. Not only that, it will make India a world magnet for sex trafficking and sex tourism.”

Donna M. Hughes, professor of Women’s Studies at the University of Rhode Island, writes in her essay ‘Prostitution: Causes and Solutions’ that legalisation does not reduce prostitution or trafficking.

“In fact,” she writes, “both activities increase because men can legally buy sex acts, and pimps and brothel keepers can legally sell and profit from them … In the Netherlands, since legalisation, there has been an increase in the use of children in prostitution.”

Activists working with sex workers are also deeply divided over the issue. While Dr S. Jana, who launched the 65,000-strong sex workers’ forum — Durbar Mahila Samanwaya Committee — based out of the eastern Indian state of West Bengal, has supported the legalisation call, others fear that it will further embolden traffickers and the prostitution mafia.

“Indian law and government policies have failed to protect sex workers due to the loopholes in law which makes them vulnerable to abuse. If the trade is legalised, the situation will worsen,” Meena Seshu, a feminist activist and founder of SANGRAM, a voluntary organisation working in the field of HIV control based in Sangli, a city in the western state of Maharashtra, told IPS.

Legalisation, adds the activist, could also scupper attempts by many women’s organisations and NGOs to rehabilitate women and children forced into prostitution.

“The state should formulate policies and schemes for the rehabilitation of sex workers who are coming out of this commercial sexual exploitation. This will offer a better solution to this complex problem,” Seshu contends.