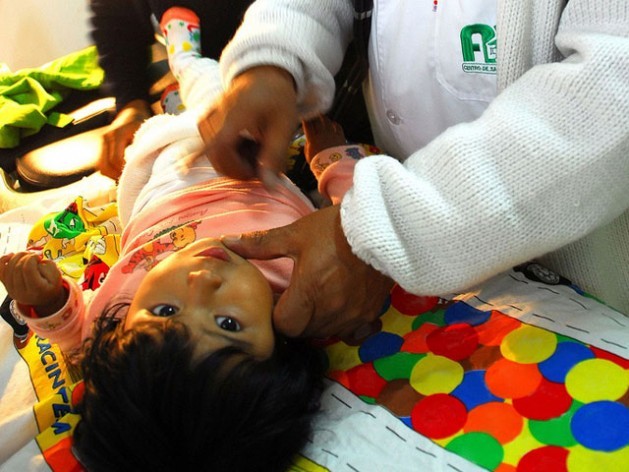 A doctor attends a 10-month-old baby in a public health centre in Bolivia, in one of the regular check-ups that are a requisite for women to receive the mother-child subsidy, one of the mechanisms created to reduce maternal and infant mortality in the country. Credit: Franz Chávez/IPS

SANTIAGO, Jun 9 2015 (IPS) - The progress that Latin America has made in reducing child mortality is cited by international institutions as an example to be followed, and the region has met the fourth Millennium Development Goal, which is to cut the under-five mortality rate by two thirds.

But this overall picture conceals huge differences between and within countries in the region.

“There have been major strides in reducing child mortality in Latin America and the Caribbean,” said Luisa Brumana, regional health adviser with the United Nations children’s fund, UNICEF.

“However, that improvement has not benefited everyone equally,” she told IPS from the UNICEF Regional Office for Latin America and the Caribbean, in Panama City.

“We tend to think that children in rural areas face the worst conditions. But recently, with the migrations to the large cities and the bad conditions in poor outlying suburbs, things are just as complicated in those areas.” -- Luisa Brumana

In Brumana’s view, “this inequality has given rise to large variations in health indicators, both between and within countries, with results generally based on wealth, education, geographic location, and/or ethnic origin.”

National averages, which in some cases are good, hide enormous inequalities in what continues to be the world’s most unequal region.

Mónica, from Chile, has been fighting for the past three years to keep her fourth child alive. He was born deformed and with brain damage. She asked to remain anonymous, because it is a touchy issue at a family and personal level.

“It has been a constant struggle, but today my son is a survivor,” she told IPS. “We have spent a lot of money, we have gone to the best doctors. I am 100 percent dedicated to his recovery. And he’s doing better every day: he communicates, we go out for walks, we play together,” she said with enthusiasm.

But Mónica admitted that not everyone has access to the best care, and that there are large contrasts despite the technological advances seen in recent years.

In Chile, where GDP stands at over 277 billion dollars, the income of a child who lives in a wealthy household is 8,000 times higher than that of a child born into poverty, according to the Fundación Sol – an example of the challenge of inequality that continues to face the region.

That is reflected in essential areas like education and health.

In 2002, for example, five premature infants from poor families died of septic shock in a public hospital in Viña del Mar, 140 km northeast of Santiago, after the preterm formula they were given through feeding tubes was contaminated by wastewater that dripped from the floor above.

“Inequalities persist and I know that if we didn’t have the means, our son’s health would be much worse. It’s horrible, but it’s true,” Mónica said. 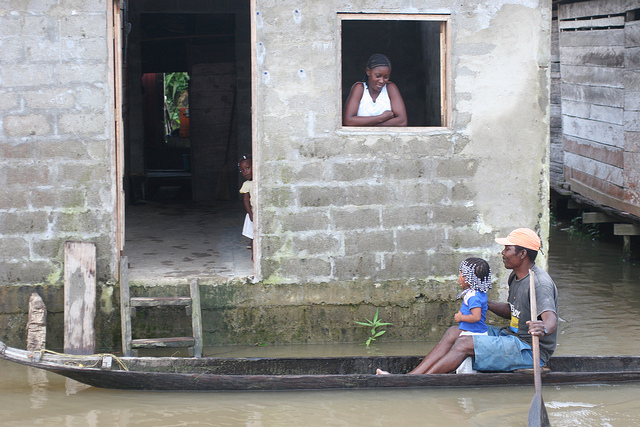 A family in a village on the banks of the Atrato river in the northwestern Colombian department of Chocó, where child mortality is three times higher than in the capital. Credit: Jesús Abad Colorado/IPS

According to UNICEF, between 1990 and 2013 under-five mortality per 1,000 live births was reduced 67 percent in Latin America. This is the region that has made the greatest progress in that regard, along with East Asia and the Pacific, which saw a similar reduction.

According to the MDGs progress chart, the region has met the goal of cutting child mortality by two-thirds, from 54 to 19 deaths of children under five per 1,000 live births between 1990 and 2013.

These advances are linked, among other factors, to economic growth in the region, where some 70 million people left poverty behind in the past decade, according to figures published in late May by the United Nations Food and Agriculture Organisation (FAO).

Worldwide, preventable and treatable causes are the leading culprits in infant mortality. And in this region, child mortality is mainly marked by the persistence of inequalities caused by different factors, such as income level, the population group to which the family belongs, where they live, or the educational level of the parents.

“For example, for a rural family that lives far from a health centre, access to healthcare is much more difficult and that can affect children’s health, such as in terms of keeping to the vaccination schedule,” Brumana explained.

“Other factors in a country that doesn’t have a good social safety net are high medical costs, which are a problem for low-income families, or the quality of health services, which is essential for guaranteeing proper care for children,” she added.

“No less important is for services to take into account cultural differences between regions and to be able to offer services adapted to different customs,” the expert said.

According to UNICEF’s “Committing to Child Survival: A Promise Renewed – Progress Report 2014”, the five countries that stand out the most in the region are Cuba, Chile, Antigua and Barbuda, Costa Rica and St. Kitts and Nevis, which have infant mortality rates below 10 per 1,000 live births.

And the five countries that despite the progress made still face the biggest challenges are Haiti, Bolivia, Guyana, Guatemala and the Dominican Republic, in that order. In the case of Haiti, the poorest country in the hemisphere, 73 children died per 1,000 live births in 2013.

“There are major inequalities within countries,” said Brumana, who added that although certain factors have more of an influence than others, “we can’t generalise about which ones have the strongest influence.

“We tend to think that children in rural areas face the worst conditions. But recently, in the migrations to the large cities and with the bad conditions in poor outlying suburbs, things are just as complicated in those areas,” she said.

One example is Colombia, where the national averages are good, but in the hinterland enormous inequalities are seen from province to province.

For example, she noted, the northwestern department or province of Chocó has an under-five child mortality rate three times higher than the rate in Bogotá: 30.5 per 1,000 live births compared to 13.77, respectively, according to 2011 figures.

“The priority now is to give better access to the most marginalised population groups, which are generally the ones living in remote rural areas, or indigenous or black people,” Brumana said.

She pointed out that there are regional initiatives working towards progress along those lines.

One example is A Promised Renewed for the Americas, whose aim is to reduce inequities in reproductive, maternal, neonatal, child, and adolescent health by means of stepped-up political and technical support for developing countries to detect inequities and raise awareness, bringing together key actors and promoting the sharing of best practices.

Another challenge is reducing neonatal mortality rates among children in their first month of life – one of the most critical stages of development.

Globally, 2.8 million babies die during this stage of their lives. One million of them don’t even live to see their second day of life.

According to the regional initiative, the important thing now is to maintain public policies focused on improving access to healthcare, and to decentralise health policies. And, as always, to guarantee education, a factor that leads to a reduction in infant mortality.