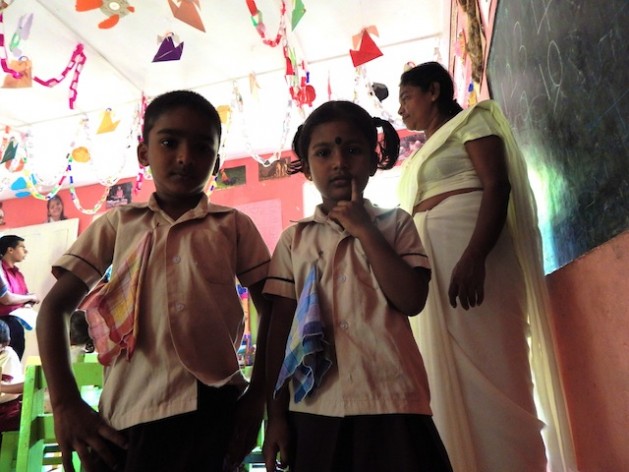 Students at a pre-school for the children of estate workers pose for a photograph in their classroom, which overlooks a large tea estate in central Sri Lankan. Credit: Kanya D’Almeida/IPS

UNITED NATIONS, Jun 15 2015 (IPS) - You may have heard of Global Citizenship Education (GCED), but unless you move in international development circles, chances are you’re not entirely sure what the acronym means.

Speaking at a seminar on this very issue at the United Nations headquarters on Jun. 15, Sofia Garcia-Garcia of SOS Children’s Villages, a care organisation striving to meet the needs of over 80,000 children in 133 countries worldwide, provided an excellent summary.

Recounting a recent project undertaken by the Global Movement for Children in Latin America and the Caribbean, of which Garcia’s organisation is a member, she explained what happened when 1,080 kids and adolescents from 10 Latin American countries were consulted about their own priorities for the U.N.’s post-2015 Sustainable Development Goals (SDGs).

“Next to the right to life and the right to liberty should be the right to education. It is the key to all freedoms and the foundation of dignity." -- Usman Sarki, deputy permanent representative for Nigeria.
“SOS works with children without parental care, and they are usually children with very, very low self esteem,” Garcia told a packed conference room Monday.

“But within 10 minutes of us explaining the initiative and saying, ‘We want to hear your voice, you are the agent of change’, children who didn’t even consider themselves as speakers were suddenly wanting to be the president of the country.”

The exercise concluded with the publication of ‘The World We Want’, an illustrated, child-friendly version of the 17 proposed SDGs.

“This is the real power of global citizenship education,” Garcia-Garcia asserted.

Backed by several missions including the Republic of Korea and the United States, and co-sponsored by civil society groups like CONCORD – an alliance of over 2,600 NGOs across Europe – as well as the 12-million member Soka Gakkai International (SGI) and the Inter Press Service news agency (IPS), the panel served as a knowledge platform to share some of the key components of GCED.

But our current reality does not reflect his convictions. We are living in a world where 58 million children are out of school and a further 100 million children do not complete primary education, according to the latest Education for All global monitoring report published by the United Nations Educational, Scientific and Cultural Organisations (UNESCO).

Add to this the fact that there are 168 million child labourers, as well as 200 million jobless adults, and the urgency of the situation becomes clear.

All told, some 781 million people globally cannot read or write, a staggering statistic in a world where not only basic literacy but also, increasingly, computer literacy, forms the fine line between a decent life or one of poverty.

However, GCED goes beyond the simple metrics of more bodies in the classroom. In short, the concept of global citizenship refers to a “sense of belonging to a broader community and common humanity,” according to UNESCO.

It aims to transform classroom pedagogy, create bonds of cultural understanding and civic consciousness and forge a global citizenry for the 21st century based on human rights, peace and equity. While advocacy is happening on a global scale, implementation of GCED will be local in nature, undertaken in accordance with countries’ education ministries and tailored to meet the specific needs of states, or communities.

GCED recognises that basic literacy alone is not sufficient to level the playing field in a world plagued with inequalities, where the wealth gap between the richest and poorest countries has risen from 35:1 during the colonial era to 80:1 today, and where the richest 85 people own more riches between them than 50 percent of the global population.

Rather, it is the quality of education that will close wealth gaps and ensure such elusive goals as peace, security and the curbing of violent extremism.

Calling attention to the increasing number of people from the developed world heading for “theatres of war in the Middle East”, Nigerian Ambassador Sarki asked, “Can we really say these people are not educated? Many of them are. Indeed, masterminds of terrorist activity are highly educated people – the question is, what kind of education have they had? We can be educated, and remain narrow-minded,” he stated.

The concept of GCED dates back to 2012 when U.N. Secretary-General Ban Ki-moon launched the Global Education First Initiative, and after much advocacy in which the Republic of Korea has played a major role, the initiative has been incorporated into the Zero Draft outcome document for the post-2015 agenda, to be finalized during negotiations at the end of the month.

Already, scores of international and grassroots initiatives centered on GCED are springing to life, or bearing fruit.

For instance, global citizenship education is one of the key strategic areas in UNESCO’s 2014-2017 education programme, while groups like SOS Children’s Villages have put the concept at the front and centre of their work by undertaking unique forms of education in order to include some of the most vulnerable groups.

Garcia-Garcia, SOS’s post-2015 advisor, told IPS that the organisation works very closely with families at risk of separation or with children who have lost parental care so, “for us, non-formal education is as essential as formal education”.

“There are lots of places to learn,” she told IPS on the sidelines of Monday’s event, “and the classroom is just one of them.”

This kind of thinking will be vital to extending the boons of GCED to the world’s indigenous people who number some 370 million and many of whom are locked in a struggle to preserve ancient forms of knowledge sharing, from local languages to oral histories.

With indigenous communities pushing hard for a place in the post-2015 agenda, global citizenship education could offer the out-of-the-box strategies needed to bring hitherto marginalized peoples into a more inclusive and sustainable framework.