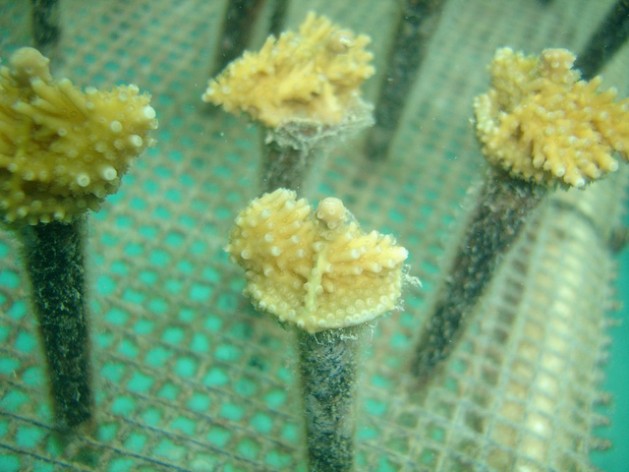 A total of 60 fragments from five species of corals have been placed on the trees in the coral nursery. Credit: Andrew Ross

KINGSTON, Jul 13 2015 (IPS) - With time running out for Jamaica’s coral reefs, local marine scientists are taking things into their own hands, rebuilding the island’s reefs and coastal defences one tiny fragment at a time – a step authorities say is critical to the country’s climate change and disaster mitigation plans.

Five years ago, local hoteliers turned to experimental coral gardening in a desperate bid to improve their diving attractions, protect their properties from frequent storms surges and arrest beach erosion.

“The fishermen have done a beautiful job of keeping the corals alive and the fish sanctuary successful." -- Andrew Ross

In 2014, their efforts were boosted when the Centre for Marine Science (CMS) at the University of the West Indies (UWI) Mona scored a 350,000-dollar grant from the International Development Bank (IDB) for the Coral Reef Restoration Project.

Project director and coastal ecologist Dale Webber told IPS that his team will carry out genetic research, attempt to crack the secrets of coral spawning and re-grow coral at several locations across the island and at the centre’s Discovery Bay site. The project will also share the research findings with other islands as well as another IDB project, Belize’s Fragments of Hope.

The reefs of Discovery Bay have been studied for more than 40 years, and are the centre of reef research in Jamaica. It is also home to several species of both fast and slow growing corals that Webber says are particularly resilient.

“They have tolerated disease, global warming, sea level rise, bleaching, etc. – all man and the environment have thrown at them – and are still flourishing. So they have naturally selected based on their resilience,” he explains.

A total of 60 fragments from five species of corals have been placed on the trees in the coral nursery. The five species are Orbicella annularis; Orbicella faveolata; Siderastrea siderea; Acropora palmata and Undaria agaricites. These fragments are being monitored as they grow and will be planted on the reefs.

Jamaica’s reefs – which make up more than 50 per cent of the 1022 kilometres of coastline, have over the years been battered by pollution, overfishing and improper development.  Finally in 1980 Hurricane Allen smashed them.

Many hoped the reefs would regenerate, but sluggish growth caused by, among other things, frequent severe weather events and an increase in bleaching incidences due to climatic changes sent stakeholders searching for options.

A massive Caribbean-wide bleaching event in 2005 resulted in widespread coral death and focussed attention on continuing sand loss at some of the island’s most valuable beaches. But aside from the devastation caused by the hurricane, scientists say the poor condition of the reefs are also the result of a die-off of the sea urchin population in 1982 and the continued capture of juvenile reef fish and the parrot.

Predictions are that the region could lose all its coral in 20 years. Some reports say that only about eight per cent of Jamaican corals are alive. However, new surveys conducted by the UWI at several sites across the island show coral cover of between 12 and 20 per cent.

Along Jamaica’s north coast from Oracabessa in St. Mary to Montego Bay, coral recovery projects have yielded varying levels of success. The Golden Eye Beach Club, the Oracabessa Fish Sanctuary and Montego Bay Marine Park are among those that have experimented with coral gardening.

The process is tedious, as divers must tend the nurseries/gardens, removing algae from the fragments of corals as they grow. The pieces are then fixed to the reefs. The results are encouraging and many see this is an expensive but sure way to repopulate dying reefs. A combination of techniques, management measures and regeneration have boosted coral cover at Discovery Bay from five percent to 14 per cent in recent years.

“We hope to supplement this and get it growing faster,” Webber who also heads UWI’s Centre for Marine Sciences says.

At the Centre’s newest Alligator Head location in the east of the island, the aim is to increase the coral cover from the existing 40 per cent. The nurseries have also been set up at the site in Portland to compare the differences in growth rate between sites.

At the NGO-operated Montego Bay Marine Park, where an artificial reef and coral nursery was established in the fish sanctuary, outreach officer Joshua Bailey reports:  “There have been moderate successes. New corals are spawning and attracting fish.”

He cautioned that the impact of “urban stressors” on the park and in surrounding communities – high human population density  and high levels of run-off – makes it difficult to judge the success of the restoration.

One of the most recent projects proposed the construction of an artificial reef off the shore of Sandals Resorts International Negril, as one of many solutions to reduce beach erosion along the famous ‘Seven Mile’ stretch of the Negril coast. The National Environment and Planning Agency (NEPA) approved the construction of an artificial reef in 1.2 metres of water offshore the Resort’s Negril bay property.

Andrew Ross is responsible for the Sandals and several other projects. A marine biologist and head of Seascape Caribbean, he explains that the Negril project lasted one year. It allowed for the study of fast and slow growing coral species and included the construction of a wave attenuation structure to determine how wave action influences sand accumulation. The coral nursery and the structures were populated with soft corals, sponges and a variety of other corals from the area.

In Oracabessa, a fishing village on 16 kilometres east of the tourist town of Ocho Rios, the commitment of the fishermen who initiated the project and their private sector partners have kept the reef and replanted corals clean and healthy, demonstrating how successful the process can be in restoring the local fisheries.

“The fishermen have done a beautiful job of keeping the corals alive and the fish sanctuary successful,” Ross says of the project he started in 2009.

Much of Jamaica’s reefs have reportedly been smothered by silt from eroding hillsides, the algal blooms from eutrophication as a result of agricultural run-offs and the disposal of sewage in the coastal waters.

The reefs are critical to Jamaica’s economy as tourism services account for a quarter of all jobs and more than 50 per cent of foreign exchange earnings.  Fisheries directly employ an estimated 33,000 people. Overall, the Caribbean makes between 5.0 and 11 billion dollars each year from fishing and tourism, an indication of the importance of reefs to the economies of the islands.

The Restoration Project provides the CMS with the resources to undertake a series of research activities “to among other things mitigate coral depletion, and identify and cultivate species that are resistant to the ravages of the impact of climate change,” Webber says.

In an email outlining the process, he notes that the project will provide “applicable information and techniques to other countries in the region that are experiencing similar challenges,” during its 18-month lifetime.

Expectations are that at the end of the project, there will be visible changes in coral cover. The successes seen in Oracabessa, where fishermen report improvements in catch rates and fish sizes, and at other sites are an indication that coral gardening is working.

Like Ross, Webber expects that there will be changes in coral cover at replanting sites within a three- to five-year period.