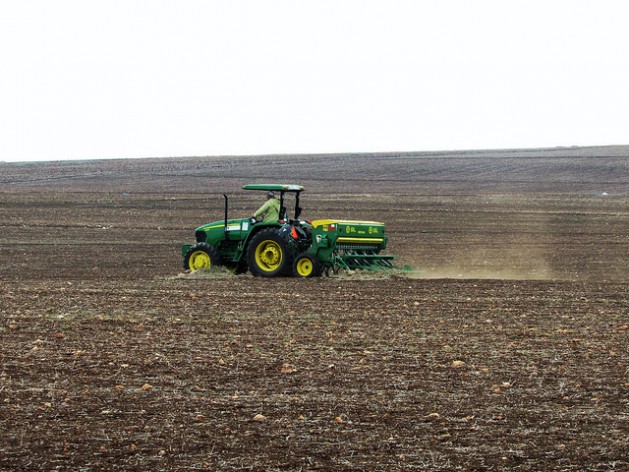 MARRAKECH, Nov 21 2016 (IPS) - With climate change posing growing threats to smallholder farmers, experts working around the issues of agriculture and food security say it is more critical than ever to implement locally appropriate solutions to help them adapt to changing rainfall patterns.

Most countries consider agriculture a priority when it comes to their plans to limit the rise of global temperatures to less than 2 degrees C. In line with the Paris Climate Change Agreement, 95 percent of all countries included agriculture in their Intended Nationally Determined Contributions (INDCs).

“We need to find solutions that allow people to live better, increase their income, promote decent jobs and be resilient." -- Martial Bernoux of FAO

“The climate is changing. We don’t have rains that we used to have in the past. In the last decade, we had two consecutive years of intense drought and we lost all the production. The animals all died because they had no water,” Ahmed Khiat, 68, a small farmer in the Moroccan community of Souaka, told IPS.

Khiat comes from a long line of farmers. Born and raised in the arid region of Settat located some 200 km northeast of Marrakech, he has cultivated the land his whole life, growing maize, lentils and other vegetables, as well as raising sheep. But the family tradition was not passed to his nine sons and daughters, who all migrated to the cities in search for jobs.

In the past, he said, farmers were able to get 90 percent of their income from agriculture — now it’s half that. “They don’t work anymore in the field,” Khiat about his sons. “The work here is very seasonal. I prefer they have a permanent job in the city.” 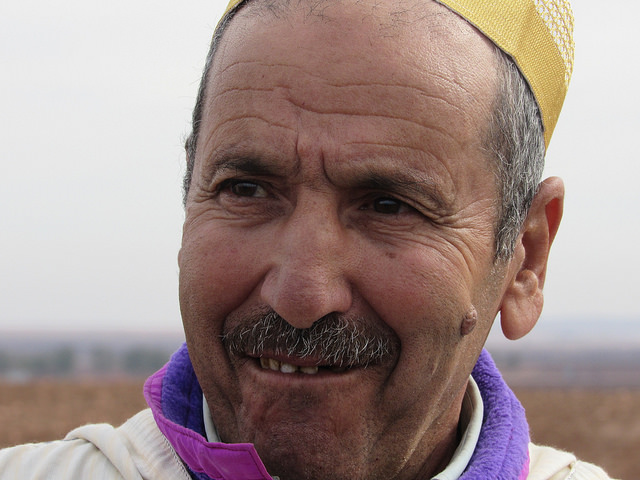 Moroccan farmer Ahmed Khiat, who has struggled with drought but benefitted from a direct seeding program that promotes resilience to climate change. Credit: Fabiola Ortiz/IPS

Agriculture is an important part of the Moroccan economy, contributing 15 percent to the country’s Gross Domestic Product (GDP) and 23 percent to its exports. Around 45 percent of Morocco’s population lives in rural areas and depends mainly on agriculture for their income, Mohamed Boughlala, an economist at the National Institute of Agricultural Research (INRA) in Morocco, told IPS.

Seventy percent of the people in the countryside live in poverty. Unemployment is common among youth and around 80 percent of farmers are illiterate. Khiat, for example, says he does not know how to spell his own name.

The impacts of climate change are already visible in Morocco, said Boughlala. The proportion of dry years has increased fourfold as surface water availability decreased by 35 percent. Climate change particularly affects smallholders who depend on low-input and rain-fed agriculture, like the communities in Settat.

“The studies we did here we found that between 1980 to 2016, we lost 100mm of rainfall. The average rainfall before 1980 was around 427 mm per year and from 1981 to 2016 the average is only 327 mm per year. This means that we lost 100 mm between the two periods. If we show them there is a technology so you can improve the yield, reduce the risk and the cost of production, we can improve small farmers’ livelihoods,” stressed Boughlala.

In 2015, families who used conventional ploughing methods had zero yield. But the farmers who applied so-called “direct seeding” had an increase of 30 percent. Direct seeding is a technology for growing cereals without disturbing the soil through tillage, i.e. without ploughing. With this technique, the scarce rainfall infiltrates the soil and is retained near the roots of the crop, which results in higher yields compared to traditional seeding. Soil erosion is reduced and labour costs go down.

Direct seeding had been tested in Morocco by INRA as a way to increase resilience to climate change. Morocco piloted this technology with financial support of a 4.3-million-dollar grant from the Special Climate Change Fund of the Global Environment Facility (GEF) – designed to strengthen the capacity of institutions and farmers to integrate climate change adaptation measures in projects which are implemented under the Plan Maroc Vert, or the green plan addressing Moroccan’s agricultural needs.

Khiat was one of the 2,500 small farmers benefitted by the direct seeding for cereals in 2011. Facilities like GEF and the Green Climate Fund will be key for African farmers to access financial resources to cope with global warming.

However, the African continent — home to 25 percent of the developing world’s population — receives only 5 percent of public and private climate funds. Although it contributes very little to greenhouse gas emissions, Africa is likely the most vulnerable to the climate impacts.

The need to protect African agriculture in the face of climate change was addressed at the UN Climate Change Conference in Marrakech (COP22) with the Global Climate Action Agenda on Nov. 17. The one-day event at the Climate Summit aimed to boost concerted efforts to cut emissions, help vulnerable nations adapt and build a sustainable future.

“We need to find new sources of funding for farmers. Climate change brings back the uncertainty of food insecurity in the world. We project that we may be soon see one billion hungry people in the world if we don’t act strongly to tackle climate change. In the COP22, we saw agriculture regaining the necessary importance,” José Graziano da Silva, the director-general of the U.N. Food and Agriculture Organization (FAO), told IPS.

Solutions should be designed and implemented locally, stressed the natural resources officer with the Climate Change Mitigation Unit at FAO, Martial Bernoux. “Our number one objective is to achieve food security and fight poverty,” he told IPS.

“What is more perturbing to small farmers is the scarcity of water and the unstable cycle that changes the rainfall regime. The frequency of climatic events increased and farmers have no time to be resilient and no ability to adapt. It is necessary to work with microcredit mechanisms to help them,” said Bernoux.

When climate change is added to the food security equation, local solutions become more complex, he said. “We need to hear the communities’ demands, their deficiencies and potentialities to improve, like establishing an early warning system to inform farmers some days in advance when the rain is coming so they can prepare the land. If they lose this opportunity, it could be fatal for the yield.”

“We need to find solutions that allow people to live better, increase their income, promote decent jobs and be resilient,” he said. “By working with agriculture you connect with all the other SDGs.”