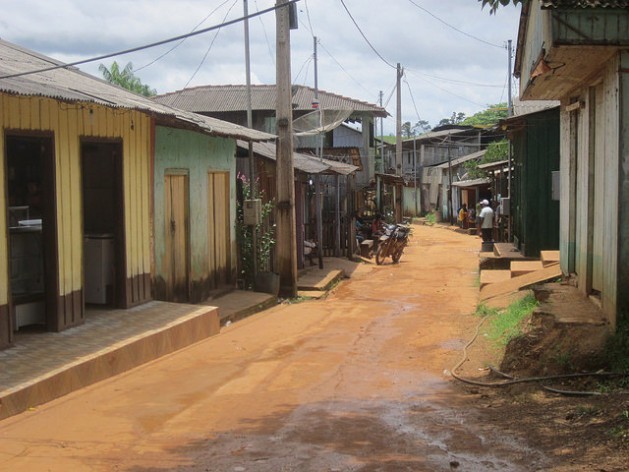 The main street of Ressaca, a town of garimpeiros or artisanal gold miners, on the right bank of the Xingu River, along the stretch called the Volta Grande or Big Bend, where a large-scale mining project, promoted by the Canadian company Belo Sun, is causing concern among the local people in this part of Brazil’s Amazon region. Credit: Mario Osava/IPS

RESSACA, Brazil, Apr 7 2017 (IPS) - The decline of this town is seen in the rundown houses and shuttered stores, and the few people along the streets on a Sunday when the scorching sun alternates with frequent rains at this time of year in Brazil’s Amazon region.

“There is still a lot of gold here,” said Valdomiro Pereira Lima, pointing to the ground on a muddy street in the town of Ressaca, to emphasize that the riches underground extend along the right bank of the Xingu River at the 100-km stretch known as Volta Grande or Big Bend, which could restore the local economy.

This drew Belo Sun, a transnational Canadian mining corporation that intends to extract 60 tons of gold in 12 years through plants that separate gold from rock, in what is to be the largest open-pit gold mine in the country.

But the mine has given rise to a new wave of concern among the locals of Ressaca and other communities downstream, where the local population has already been affected by the impacts of the Belo Monte hydroelectric plant, operational since late 2015 and set to be completed in 2019. 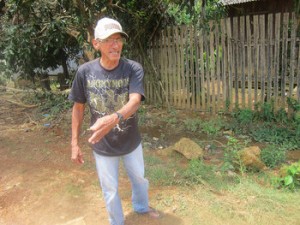 Valdomiro Pereira Lima, a garimpeiro or informal miner, says there is gold beneath the streets of the town of Ressaca, as in many other areas along the Volta Grande of the Xingu River. But the residents of this rundown town in Brazil’s Amazon region are opposed to a large-scale gold mining project. Credit: Mario Osava/IPS

The 64-year-old Pereira Lima has been mining for gold since 1980, when at the age of 27 he left farming in Maranhão, his home state in northeastern Brazil, to become a “garimpeiro” or informal artisanal miner in Brazil’s Amazon region.

He worked in Sierra Pelada, in the northern state of Pará, and in Volta Grande, which lured near 100,000 miners in the 1980s, as well as in the state of Roraima, along the border with Venezuela, before settling in Ressaca.

But the gold that gave rise to this village and brought it prosperity, as well as to other towns and settlements that emerged around nearby mines, started to become less accessible, while the garimpeiro way of life deteriorated, IPS noted, talking with all the interested parties during a one-week tour of the Volta Grande.

“There were over 8,000 garimpeiros when I arrived here in 1992, today there are just 400 to 500 left,” said 53-year-old José Pereira Cunha, vice president of the Mixed Cooperative of Garimpeiros from Ressaca, Itatá, Galo, Ouro Verde and Ilha da Fazenda.

“We used to find up to two kg of gold per week, now it’s only one per year,” said the garimpeiro leader, known by the nickname of Pirulito, because he is a small man. He has been a miner since the age of 17, and also got his start in Sierra Pelada.

But everything collapsed after 2012, when the police and environmental inspectors began to crack down on the garimpeiros, driving out many of them, he said. Moreover, the mining authorities did not renew the operating permits for the cooperative, outlawing the miners, who are still active in some mines.

Dozens of them have filed lawsuits in faraway cities.

“We have turned to the justice system to secure our rights,” said Cunha, who blames the campaign on Belo Sun and the municipal and state governments, interested in collecting more taxes, since the persecution began two years after the company began investigating potential gold deposits along the Volta Grande. 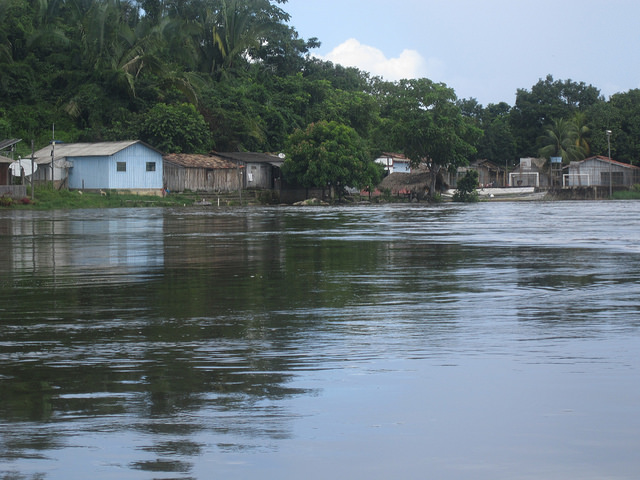 The village of Ilha da Fazenda depends economically on the town of Ressaca, where many families have left due to the decline of small-scale gold mining, added to the impact of the nearby Belo Monte hydroelectric plant. Credit: Mario Osava/IPS

The company obtained an advance license in 2004, which recognises the environmental viability of the project. And on Feb. 2 the Environment and Sustainability department of the state of Pará granted it a permit to build the necessary plants.

But just two weeks later, the justice system suspended the permit for 180 days, demanding measures to relocate the affected population and clarification about the land acquired for the mine, presumably illegally.

Belo Sun claims that it has met all the requirements and conditions. The company keeps a register of the local population in the directly affected area, which it continually updates, because “the garimpeiros come and go,” according to Mauro Barros, the director of the company in Brazil. 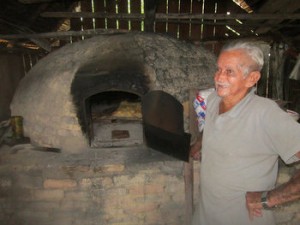 João Lisboa Sobrinho, 85, a baker from Ilha da Fazenda who “only” has ten children. Until recently, he used 50 kg of flour a day to make bread, but now uses just three – a reflection of the decline and depopulation of this island village along the Xingu River, in the northern Brazilian state of Pará. Credit: Mario Osava/IPS

“It is not necessary to remove the population, we can even operate with everybody staying in their homes, if that’s what they want. All over the world there are active mines next to cities,” said Barros, a lawyer with previous experience in other mining companies.

But he said, in an interview at the company’s headquarters in the nearby city of Altamira, that those who are relocated will be provided with all the services, access to the river and support to earn an income. “We want to develop the region,” he said, adding that at least 80 per cent of the company’s employees will be locals.

The company will generate 2,100 direct jobs at the peak of the installation phase, and 526 once the mine is operational, he said. The promise is to train the garimpeiros to work in mechanized mining.

According to estimates from Belo Sun, there are probable reserves of 108.7 tons of gold.

It takes a ton of rocks to obtain a gram of gold.

Barros ruled out the risk, which has raised concern among the local population and environmentalists, that the mine will pollute the waters of the Xingu River, which has already been contaminated and has a reduced water level due to the Belo Monte mine. He guaranteed that Belo Sun would only use rainwater, and would hold its waste products safely.

But the conflict with the miners’ cooperative, community leaders and indigenous people who live along the Volta Grande has already begun.

“Either Belo Sun throws us out of here or we throw them out,” said Cunha, vice president of the cooperative.

The town has not received the promised compensation from Norte Energía, the company that holds the concession to run Belo Monte, nor services from the municipality, because “it would be pointless, since we are supposed to be resettled,” said Francisco Pereira, head of the Association of Ressaca Residents. 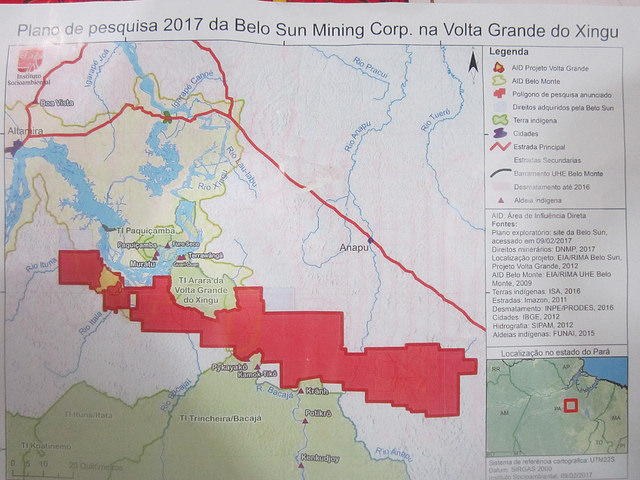 A map from Belo Sun showing the area where the Canadian mining company intends to extract 60 tons of gold. In blue, the Volta Grande or Big Bend in the Xingu River, where the Belo Monte hydroelectric plant has been built, in Brazil’s Amazon region. Credit: Mario Osava/IPS

The town of about 200 families still has no basic sewage. “The wastewater runs into the river, we have no drinking water or sports field, and at the school the heat is unbearable,” and nothing will be done because of the uncertainty created by Belo Sun, said Pereira, a 58-year-old garimpeiro who is now working as a farm labourer.

The uncertainty and decline are also affecting the roughly 50 families that live in Ilha da Fazenda, a village dependent on Ressaca and separated from it by a two-kilometre stretch of a tributary of the Xingu River. Children from the fifth grade and up and sick people can only go to school or receive healthcare in the town of Ressaca, which they reach in small boats.

“In the good old days of the ‘garimpo’ (informal mining), there were dozens of bars in Ilha da Fazenda. They extracted gold in Ressaca and came here to spend their money,” said 85-year-old baker João Lisboa Sobrinho, who has “only ten children” and is a living history of the island village.

“Ninety-five per cent of the people on the island want to move away,” because if Ressaca disappears, it will be impossible to live in Ilha da Fazenda,” said Sebastião Almeida da Silva, who owns the only general store on the island.

More than 20 families have already left the village.

But “I will only leave if I am the only one left,” said Adelir Sampaio dos Santos, a nurse from José Porfirio, the municipality where the mining area is located. “We will only be left isolated if we don’t take action,” she said, urging her fellow villagers to struggle for the school, medical post, water and electricity that are needed in the village.

“With the garimpo in better conditions, supported by the government, with state banks buying our gold, we could bring life back to local cities and towns, we could pay taxes, we could all stay and prosper,” said Divino Gomes, a surveyor who worked with environmentalist organisations before becoming a garimpeiro.

“I have seen mining companies elsewhere, they take all the wealth and leave craters. We have to think about it ten times over before accepting their projects,” he concluded.