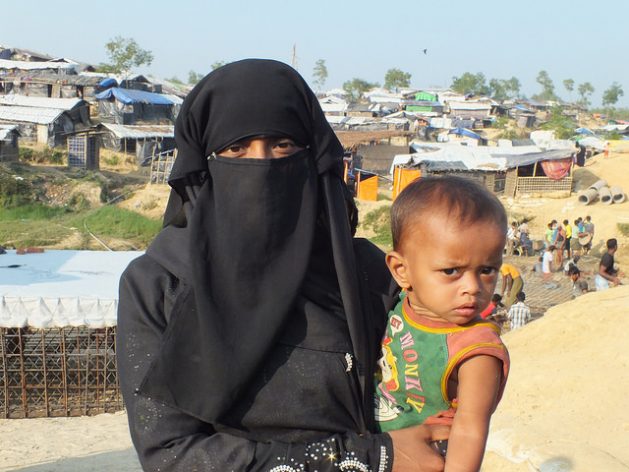 A Rohingya woman and child at Kutupalong camp, about 35 km from Cox's Bazar in Bangladesh. Credit: Naimul Haq/IPS

COX'S BAZAR, Bangladesh, Nov 29 2017 (IPS) - Parul Akhtar,* a Rohingya woman in her mid-twenties, may never wish to remember the homeland she and her children left about three weeks ago.

Too scared to speak out, Parul, the mother of two young children, rests inside the makeshift tent she now calls her home in Kutupalong in southeastern Bangladesh, which is hosting thousands of Rohingya refugees fleeing persecution in neighbouring Myanmar.

“When I came back to consciousness, I found my brothers and husband missing. My children were also not spared.” --Nasima Aktar

But it is still fresh in her mind as she recalls the violence she and her family endured day after day when truckloads of army soldiers, along with local Buddhist men, came to violate women, loot valuables and burn homes while picking up young men in her village in Rajarbil in Maungdaw district in Myanmar.

“My body shivers when I recall those days,” says Parul, visibly upset by the horrifying memories.

Standing in front of her tent in Modhuchhara camp in the vast and so far the biggest Rohingya refugee camp in Kutupalong, about 35 kilometers from the nearest city of Cox’s Bazar, Parul, narrates the ordeal of escaping the atrocities.

“It was a nightmare trying to escape and dodge the embedded informers, army and of course, police,” Parul says.

“We fled in the darkness as our homes burnt in fierce flames. The entire village of Rajarbil turned into a ghost town,” Parul recounts, tears on her cheeks.

Parul was gang-raped weeks before she and her family arrived in Bangladesh, a south Asian country with a highly dense population even before the crisis.  She is one of about a million Rohingya refugees who fled their ancestral home in north Rakhine state, which is said to be one of the poorest states in Myanmar.

Laila Khatun*, another survivor of mass gang rapes by the junta soldiers and other security forces, describes how she, her husband and four children were beaten and tied up inside her thatched home in south Aung Dawng village in Maundaw district and threatened with being burnt alive.

“I begged the soldiers to show mercy to us,” says Laila, also in her early twenties. “I was dragged outside and stripped and then I don’t remember how many of the soldiers raped me in turns.”

Laila’s family was spared only because she showed no resistance to sexual acts which the Rohingya women call ‘Jhulum’ carried out in front of her family.

A fellow rape victim, Nasima Aktar* from Hassurata village in Mangdaw, says, “When I came back to consciousness, I found my brothers and husband missing. My children were also not spared.” 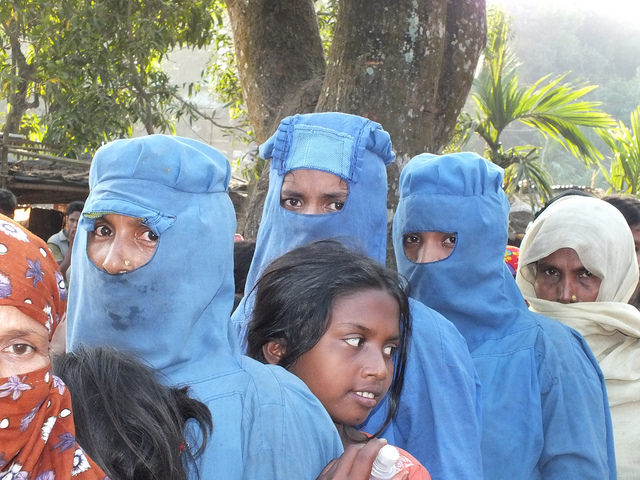 This IPS correspondent visited the local hospital in Cox’s Bazar. Many of those approached to speak were too frightened to talk to a reporter.

“Their sufferings are unbearable,” said one of the doctors who requested anonymity. “We have treated scores of children who were shot and women whose legs were also blown off. I have heard of such conditions in war zones but these are innocent, unarmed people. What crimes they could possibly have committed which exposes them to landmines and indiscriminate gunshots?”

The road to safe shelter across the border in Bangladesh is not easy. Thousands who flee their homes take the risk of following almost the same route through the rough, often muddy and hilly terrain of dense forest, while few others have attempted tried to sail across the rough sea of the Bay of Bengal.

Peyara Begum* narrates how she and her neighbours escaped to reach Kutupalong in Ukhiya, a small town south of the popular tourist city Cox’s Bazar.

“It was dark and we had to carry our children and bags of whatever we could pack to run for our lives,” Peyara says, adding, “We had no men with us, only seven of us [women]. We walked for 12 days across the slopes in complete silence to evade being detected by the security men who hunt for young men and women.”

The brutality towards the Rohingyas, a majority of whom are Muslims, was well-documented long before the world came to know about the Burmese junta regime’s “ethnic cleansing,” which has escalated since late August.

The regime’s top leaders are widely accused of ordering torture, enforced disappearance, beatings, arbitrary detentions, shootings and killings to spread fear among the Rohingyas and force them out.

Hashem Ali*, one of the many survivors, showed his wounded left hand, which was recently operated on in a hospital in Cox’s Bazar.

Ali, who arrived in the camp about a month ago, describes how he and three other young men escaped near death when the Nasaka (Myanmar border guards) opened fire on them.

“We were a group of eight. When we heard the gunshots from behind us deep in the dark forest, we split and ran. I was shot in my left arm in indiscriminate shooting but did not stop. After a chase of about 20 to 25 minutes, we were only four. One of my fellows had seen two of the four men accompanying us get shot and never saw them again,” Ali says.

A fellow survivor, Joshim from Shilkhali village in Maungdaw, says, “For the past four months none of the men, particularly young ones, could stay with their families.

“I have witnessed my own brother and many other men being dragged out of their homes, being beaten until they were loaded on the army trucks,” recalls Ali, who broke down crying on his knees.

“Every day is a nightmare,” says Mosammet Jahanara*, 33, from Rasidong village in Maungdaw. “Men, young women and even tewnaged girls would go into hiding whenever we heard the sound of motor vehicles approaching our village.”

“Machine guns were fired at the thatched homes,” Jahanara says. “We would duck our heads down and run for shelter. Some fell on the ground bleeding to death while others, too weak to escape, were picked up for torture.”

The camps scattered across the 30 km stretch of Nayapara to Kutupalongmay are a temporary safe shelter, but young women and girls are still at risk of being exploited.

Some 52 percent of the population is women, most of whom have had no education. Many are now single mothers.

Sarat Dash, Mission Head of the International Organisation for Migration (IOM), told IPS, “Women are some of the worst affected by this crisis. Over half of the Rohingya refugees seeking safety in Cox’s Bazar are women and many of them have experienced physical and sexual assault.”

“For some women, settling in Cox’s Bazar does not equal safety. There have been cases of women and girls becoming the target of traffickers, hoping to prey off their vulnerability. IOM is working to prevent exploitation and trafficking. Connected to this is also the issue of forced and early marriage. Seen as a means of protection and economic empowerment, we are concerned that young girls are being married off to older men.”

Dr Sathyanarayanan Doraiswamy, Chief of Health, United Nations Population Fund (UNFPA) in Bangladesh, told IPS “Addressing the Rohingya issue is challenging. In a very short time, we’ve already set up 13 Women Friendly Spaces (WFS) which offer safe areas where women and girls have been able to access basic services such as counseling, referrals to medical and other services, information about other specialised services and humanitarian aid, and at times temporary shelters.”

He continued, “WFS workers and community watch groups support women and girls who have experienced, or are at risk of gender based violence, including sexual violence. We are working with community groups and partners to prevent gender-based violence, which often spikes within the context of humanitarian emergencies.”

The spokesperson of United Nations High Commission for Refugees or UNHCR in Cox’s Bazar, Mohammed Abu Asaker told IPS, “UNHCR and partner organizations identified many families headed by children and children who are alone or unaccompanied.”

He says, “We are working with other child protection actors towards having sustainable foster care arrangements within the communities. We believe that it’s very important for these children to stay with their communities and to stay with people from the same village (neighbors), or with their extended family members if they have them.”

The scale of the attention from the international community for the refugees is unprecedented and their activities in Cox’s Bazar is a testimony. Bangladesh now hosts over a million refugees, with more arriving every day through 39 border points, in addition to some 300,000 already registered refugees hosted since 1992.

Rezaul Karim Chowdhury, Executive Director of COAST Trust, a local NGO pioneering in crisis management also working with many international aid agencies, like Mercy Malaysia, told IPS, “The crisis is huge and the interventions like counseling for trauma are also a massive challenge. We noticed from our own assessment that almost every woman and young girl is suffering trauma from sexual exploitation or killing memories. Despite mitigating the basic needs, addressing such a massive traumatized population is certainly a big task.”

Life for the Rohingya population had always been miserable, with limited access to basic services like healthcare and safe water and few livelihood opportunities.

The Rohingya community has one of the lowest literacy rates in Myanmar. Muslims face restrictions on freedom of movement and access to education. Many Rakhine contest the claims of the Rohingya to a distinct ethnic heritage and historic links to Rakhine State, viewing the Rohingya as ‘Bengali’ (the language spoken in Bangladesh) with no cultural, religious or social ties to Myanmar.

They are not considered one of the country’s 135 official ethnic groups and have been denied citizenship in Myanmar since 1982, which has effectively rendered them stateless.

Since 2012, incidents of religious intolerance and incitement to hatred by extremist and ultra-nationalist Buddhist groups have increased across the country. The Rohingya and other Muslims are often portrayed as a “threat to race and religion”. Against this backdrop, tensions have occasionally erupted into violence.

The so-called “security operations” led to numerous reports of serious abuses by government security forces against Rohingya villagers, including summary killings, rape and other sexual violence, torture and ill-treatment, arbitrary arrests, and arson.

A recent UN report says these actions amount to possible crimes against humanity and ethnic cleansing.

The military insists this “clearance operation” was a justified counterinsurgency operation following an October 9, 2016 attack on security forces near the Bangladesh border, which resulted in the deaths of nine policemen.

Global leaders have called on Myanmar to respect the rule of law and end the atrocities on the innocent civilians.