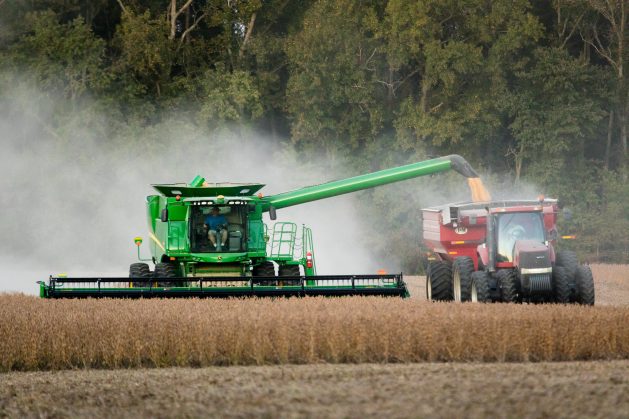 A pair of combines harvesting soybeans in the US. Courtesy: World Resources Institute.

WASHINGTON, D.C., Apr 17 2019 (IPS) - Water supply has long been a key issue in California. Today it is no less critical, especially given the years of drought that California is experiencing, lending additional impetus to assessing the impact of agriculture on water.

The conventional estimate is that 80 percent of the water used in California flows into the state’s multi-billion-dollar agricultural sector.

But it goes way beyond water. As in California, agriculture in the United States is dominated by large, specialised crop and animal farms that focus on short-term productivity, often at the cost of creating other environmental problems, as well as public health issues.

Increasingly, there is recognition that societies need to work towards an agriculture that is greener, cleaner, and provides better quality, more nutritious food that not only feeds people but improves their diet. This is not a new idea, rather one that has been ignored in our impatient, on-demand society, as well as one that has had to compete against a food and diet industry valued at 66 billion dollars in the U.S., with all the vested interests that go with it.

“It is not necessarily the size of holdings or the level of mechanisation and industrialisation that is a problem, rather it is the way agriculture is practiced, when this has unintentional impacts on the environment,” Jean-Marc Faurès, a former senior advisor on sustainable agriculture at the United Nation’s Food and Agriculture Organisation (FAO), tells IPS.

“In the past, we have looked at productivity as the sole metrics to measure success in agriculture. Measuring agricultural sustainability forces us to go beyond productivity only and include other dimensions, like the environmental, but also the social dimension.”

To better help people understand where the problem areas are occurring, the Barilla Center for Food and Nutrition Foundation (BCFN), a non-profit research centre studying the causes and effects on food created by economic, scientific, societal and environmental factors, has produced a food sustainability index profile for the U.S. and another 66 countries.

Each country profile focuses on three pillars—food loss and waste, sustainable agriculture, nutritional challenges—each of which is broken into multiple relevant categories that are rated green, yellow or red, to indicate progress: green being good, red being bad.

The U.S. score for sustainable agriculture was average due to the land category having repeatedly low scores across indicators such as the impact on land of animal feed and biofuels, agricultural subsidies and diversification of agricultural systems (the U.S. earned a high score for the food loss and waste pillar, but only performed moderately well in terms of nutritional challenges).

“A major issue in the U.S. is the low proportion of land set aside for organic farming as opposed to the large amount used for bio-fuel and animal feed,” BCFN’s Katarzyna Dembska tells IPS. “The large demand for animal feed is directly linked to the meat supply in the country: the additional 225 grams of meat available per capita per day—compared to the recommended intakes—makes the U.S. availability of meat for consumers among the highest in the world.”

Lack of diversification is another problem in the U.S., and around the world, with people fed from just a very limited basket of crops and animals, Faurès says. This increases the vulnerability of agricultural systems to unexpected events—climatic, pests, or market related—but also means that people eat food that is not diversified and is too rich in carbohydrates and not enough in vitamins.

“It is a paradox in a way that many developing countries show much more diverse production systems than developed countries,” Faurès says. “This is in part due to the imperative need for farmers to diversify sources of income and reduce risks related to shocks.”

He emphasises, however, that he isn’t recommending turning to be more like those farming models, which have many of their own problems.

“Moving towards more sustainable agriculture takes different shapes according to your starting point,” Faurès says. “In poor, unproductive areas, the focus is on increasing productivity and reducing vulnerability; in more advanced, input-intensive systems, sustainability implies a move towards greener production systems that make better use of the resources that our ecosystems offer and progressively reduce their negative impacts on the environment.”

Food subsidies in the U.S. are often called out for sustaining problems, scoring a red in the food sustainability index profile.

“The bigger issue with subsidies is what they have failed to do, and how they are underachieving in terms of what they could be doing,” Timothy Searchinger, a research scholar at Princeton University and for the World Resources Institute, tells IPS. “Agriculture has been grossly under regulated and under incentivised on the environmental side.”

The result has seen environmental costs incurred and opportunities missed for the likes of improving land use.

“Even though the U.S. is blessed with an abundance of farm-friendly country, it’s still limited,” Ari Phillips, an environmental journalist, tells IPS. “Agricultural land is extremely unaccommodating for wildlife and can lead to nearby chemical contamination issues.”

There are good examples of countries succeeding in cutting back on such environmental consequences, Searchinger says. Costa Rica has made significant progress in reducing deforestation that was occurring as a result of subsidies paid for grazing, while New Zealand has basically gone “cold turkey” on subsidies and as a result improved land use and agriculture.

He notes that when considering all this, it should be borne in mind there are different ways of defining progress and hence it should not be forgotten that agriculture has achieved what it set out to do.

“There’s been stunning progress in making food—the advances really have been staggering,” Searchinger says. “Twenty-five years ago, many people in China were desperately hungry—that’s been turned around, though with gigantic environmental consequences.”

The implications globally are clear enough to cause grave concerns. The UN has predicted that as soon as 2025, two-thirds of the world’s population could be dealing with water scarcity. Increasingly in the news are stories of water-starved communities around the world—from Houston to Puerto Rico to Cape Town—indicating that our trust in the tap is far less dependable than we assume.

“Drought-prone states like Texas and California were already water stressed before climate change came around,” Phillips says. “Overcoming the combined challenges of population growth and reduced precipitation in a limited amount of time will be tough. Agriculture will have to play a big part in this transition. If it gets bad enough, there could be permanent water rationing.”

Tackling these sorts of problems, and how agriculture influences them, is highly complex due to all the interlinking factors.

“People need to be better educated about the water embedded in the food that they eat and the products that they use,” says Jack Ceadel with Global Water Intelligence. “We need to adopt new technology and invest properly in our water infrastructure and making our cities more efficient and resilient.”

At the same time, it requires better appreciation of the sorts of hard data provided by the likes of Barilla’s food sustainability index profiles, rather than being swayed by what might look good. Searchinger notes that though people may prefer more traditional farms that appear more in harmony with the surrounding environment, even those types of farms have transformed the environment significantly, while larger, more ugly farms may have less impact environmentally per tonne of food produced.

Commentators note that changing the food culture of any country like the U.S.—in its case with 328 million keen and diverse appetites—will require redirecting, reframing and sometimes remaking traditional habits, expectations and the physical environment, as well as what is taken as normal and acceptable in people’s lives.

“The first thing is to feed people,” Searchinger says. “But you have to do it with more environmental sensitivity.”