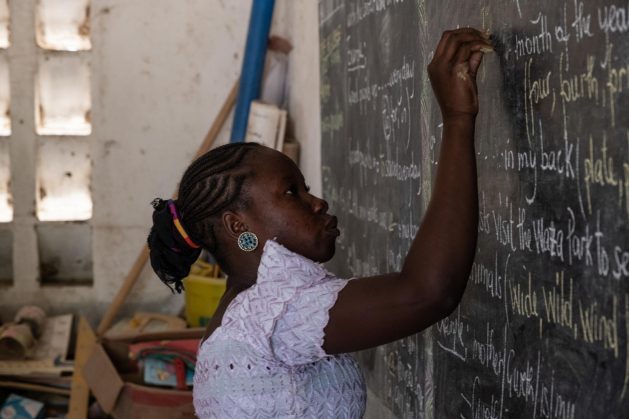 Fanta Mohamet, 14, writes on the blackboard at the school she attends in Zamaï, a village near a settlement for refugees in Mayo-Tsanaga, Far North Region, Cameroon on 28 May 2019. Courtesy: United Nations Children's Fund (UNICEF)

JOHANNESBURG, Aug 24 2019 (IPS) - Fourteen-year-old Fanta lives in a tent in a settlement in Zamaï, a village in the Far North Region of Cameroon with her mother and two brothers. They came here more than a year ago after her father and elder brother were murdered and her elder sister abducted by the extremist group Boko Haram.

The day members of the armed extremist group Boko Haram came to their home in Nigeria to search for her father, a police officer, was the day everything changed.

The fate of her sister is unknown but each year thousands of girls are abducted by the armed group and forced into marriage.

There are 1,500 other displaced people who live in the settlement in Zamaï – more than three fifths of whom are children. And while life remains difficult, Fanta has something many other children of violence in the region do not, she is able to continue her education despite the prevailing insecurity.

According to new report released Aug. 23 by the United Nations Children’s Agency (UNICEF), nearly two million children in West and Central Africa are being robbed of an education due to violence and insecurity in and around their schools.

“Ideological opposition to what is seen as Western-style education, especially for girls, is central to many of the disputes that ravage the region. As a result, schoolchildren, teachers, administrators and the education infrastructure are being deliberately targeted. And region-wide, such attacks are on the rise,” UNICEF noted.

Burkina Faso, Cameroon, the Central African Republic (CAR), Chad, the Democratic Republic of the Congo, Mali, Niger and Nigeria, are experiencing a surge in threats and attacks against students, teachers and schools. 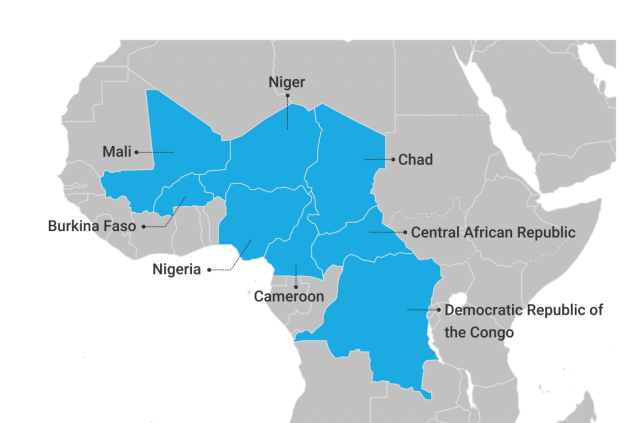 Areas where schools are primarily affected by conflict. Courtesy: UNICEF

“Deliberate attacks and unabating threats against education – the very foundation of peace and prosperity have cast a dark shadow on children, families, and communities across the region,” said Gornitzka. “I visited a displacement camp in Mopti, central Mali, where I met young children at a UNICEF-supported safe learning space. It was evident to me how vital education is for them and for their families.”

UNICEF has supported the setup of 169 community learning centres in Mali, which provide safe spaces for children to learn.

The Global Coalition to Protect Education from Attack (GCPEA), a coalition of international human rights and education organisations from across the world, noted that in the past five years the coalition had documented more than 14,000 attacks in 34 countries and that there was a systematic pattern of attacks on education. “Armed forces and armed groups were also reportedly responsible for sexual violence in educational settings, or along school routes, in at least 17 countries, including the Democratic Republic of the Congo, during the same period.”

In May, GCPEA released a 76-page report on the effects that the 2016-2017 attacks by armed groups on hundreds of schools in the Kasai region of central Democratic Republic of Congo had on children.

Based on over 55 interviews with female students, as well as principals, and teachers from schools that were attacked in the region, the report described how members of armed groups raped female students and school staff during the attacks or when girls were fleeing such attacks. Girls were also abducted from schools to “purportedly to join the militia, but instead raped or forced them to “marry” militia members”.

“Being out of school, even for relatively short periods, increases the risk of early marriage for girls,” GCPEA had said.

UNICEF raised this also as a concern for children affected by the conflict in West and Central Africa.

“Out-of-school children also face a present filled with dangers. Compared to their peers who are in school, they are at a much higher risk of recruitment by armed groups. Girls face an elevated risk of gender-based violence and are forced into child marriage more often, with ensuing early pregnancies and childbirth that threaten their lives and health,” the UNICEF Child Alert titled Education Under Threat in West and Central Africa, noted. 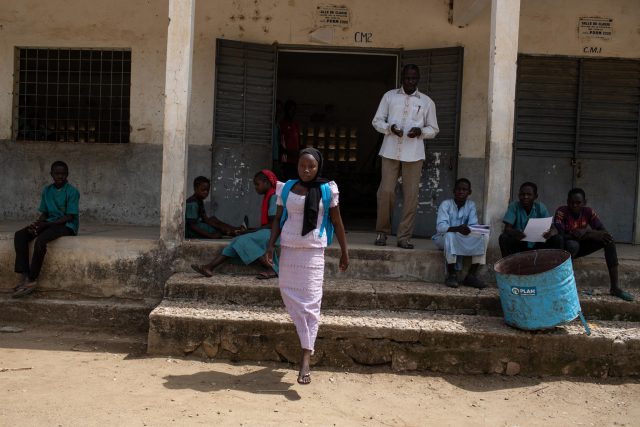 Fanta Mohamet, 14, on her way home from school in Zamaï, a village near a settlement for displaced people in Mayo-Tsanaga, Far North Region, Cameroon on 28 May 2019. Courtesy: United Nations Children’s Fund (UNICEF)

UNICEF has long been sounding the alarm about the attacks on schools, students and educators, stating that these are attacks on children’s right to an education and on their futures.

The agency and its partners called on governments, armed forces, other parties to take action to stop attacks and threats against schools, students, teachers and other school personnel in West and Central Africa – and to support quality learning in the region.

The U.N. body also called on States to endorse and implement the Safe Schools Declaration. The declaration provides States the opportunity to express broad political support for the protection and continuation of education in armed conflict.

“With more than 40 million 6- to 14-year-old children missing out on their right to education in West and Central Africa, it is crucial that governments and their partners work to diversify available options for quality education,” said UNICEF Regional Director for West and Central Africa Marie-Pierre Poirier. “Culturally suitable models with innovative, inclusive and flexible approaches, which meet quality learning standards, can help reach many children, especially in situation of conflict.”

UNICEF is working with governments across West and Central Africa to offer alternative teaching and learning tools, which includes the first-of-its-kind Radio Education in Emergencies programme. Other interventions also include psychosocial support, the distribution of exercise books, pencils and pens to children to facilitate their learning.

“Education is important. If a girl marries young, it’s dangerous. If her husband doesn’t care for her, with an education she can take care of herself,” Fanta said.