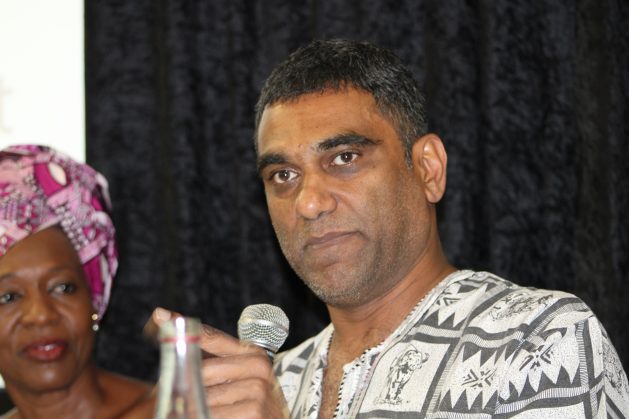 CAPE TOWN, South Africa, Sep 11 2019 (IPS) - Disinvestments in fossil fuels amounting to 11 trillion dollars – eight times the global GDP – have been recorded in the last six months of this year, according to a new report.

‘$11 Trillion and counting: new goals for a fossil-free world’, was released by 350.org in Cape Town, South Africa this week ahead of  the Financing the Future Summit.

According to the report, divestment “leapt from 52 billion dollars in 2014 to more than 11 trillion dollars today — a stunning increase of 22,000 percent”.

But the report noted that while campaigners have successfully managed to influence over 1,110 institutions to remove their money from oil, coal and gas companies, investments in green energy remain low. This is a concern environmental activists pushing for the financing of a fossil-free future where energy equality is the norm.

Ahmed Mokgopo, divestment campaigner for 350.org, told IPS that to avoid the catastrophic impacts of climate change we need to limit the global temperature rise to 1.5° Celsius and that divestment campaigns are calling on local people push their local institutions to stop investing in the fossil fuel sector and delegitimise it.

“It is less about the emissions and more about making sure that the companies become socially and morally delegitimised,” Mokgopo said, explaining their report notes that there is a decade left to cut down on carbon emissions and the world must act quickly.

“We are also demonstrating that the movement for divest  away from fossil fuels has grown astronomically… that growth has happened so fast,” he said.

The Global Climate Divest-Invest Summit in Cape Town seeks to provide tools and resources to align capital with climate goals while challenging the global community to leave fossil fuels in the ground. The summit which has attracted over 300 delegates from 44 countries is designed to build power among divest-invest advocates on every continent, working to accelerate the flow of capital out of the fossil fuel industry, and into a 100 percent renewable energy future.

“It is a good thing that the 11 trillion dollars have been divested but that does not mean that all the pension funds are no long financing fossil fuels there are those still exposed to the fossil fuel sector. However, what this moment represents that people power can stop that from happening and that is what we are doing,” said Mokgopo.

He said in South Africa – one of the major carbon emitters – the campaign has been heeded by many faith groups and organisations like the Desmond and Leah Tutu Foundation and the Anglican Church of Southern Africa. The city of Cape Town has committed to divest from fossil fuels.

Clara Vondrich, Director of Divest Invest and co-author of the report, said institutional investors have the power to make or break the future but there is no more time for shareholder engagement with the fossil fuel industry that is digging and burning the world past climate tipping point.

“You cannot negotiate with a tiger with your head in its mouth,” Vondrich told IPS. “Finance is a key to making sure we beat the climate crisis in time. There is trillions of dollars worldwide that are currently invested in the fossil fuel industry that is destroying the planet and deepening every day our climate emergency.”

Vondrich said the money in the fossil fuel industry should be redirected into climate solutions, renewable energy, efficiency and energy access to beat climate change and secure a liveable future for all.

Cleaner energy is becoming affordable and cost effective and when governments make sustainable infrastructure decisions to guide development in the next 50 years, everyone wins. However, she laments the deep corruption that governments are embedded in the fuel industry which has led to trillions of dollars in fuel subsidies around the world.

The city of Cape Town was a hotbed of divestment campaigning during the apartheid era and the current push underscores the parallels between the movement for climate justice and ongoing campaigns for social, racial and gender justice. While drawing strength from the success of the people-powered movement for divestment, summit organisers were quick to condemn the recent spate of xenophobic and gender-based violence in South Africa, and emphasise the need for thoughtful leadership in the fight for justice.

Financing a fossil fuel-free future in which everyone has access to renewable energy – especially the 1 billion people living in energy poverty – is indispensable to solving the climate crisis, Vondrich.

With little time left before we lock in irreversible climate impacts, mission-driven leaders are responding by taking action. Faith leaders, foundations, university administrators, health care organisations, and municipal governments are now all looking at how they can finance a just future.

Tomás Insua, the Executive Director of the Global Catholic Climate Movement, said millions of people are confronting the rising hunger, sickness, and conflict that come with a warming world. Faith institutions, he said, were divesting from fossil fuels, proving that greed will never triumph over love.

“Just like the divestment movement against the apartheid regime provided important solidarity and support to the liberation struggle in South Africa, this global climate divestment movement reinforces the activists who put their lives on the line blocking coal, oil, and gas projects for the safety of us all,” he said.

Naidoo warned, however, that the transition to clean energy should not come at the expense of of human rights and job security for many people working in the fossil fuel industry.

“Investors and governments have a profound obligation to shift capital from the past to the future — now, before it’s too late,” Christiana Figueres, form Executive Secretary of the UN Frameworks Convention on Climate Change and a Global ambassador of the Financing the Future Summit said in a solidarity message.  “The Divest Invest movement is more important than ever: Global investments in clean energy have hit a six-year low while fossil fuel emissions are at an all-time high.”