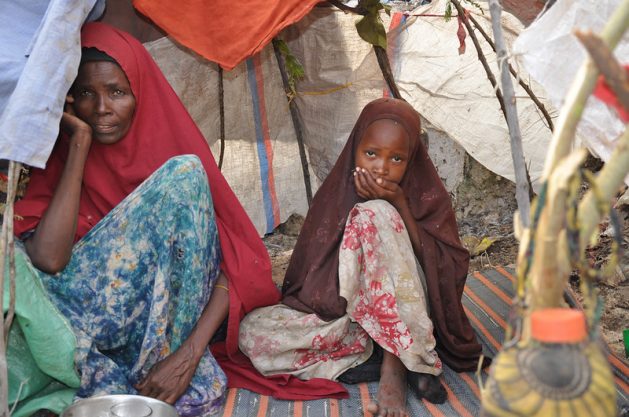 The $683 million will be used for efforts towards women’s reproductive and sexual health rights across 57 countries, of which about $300 million will be directed towards UNFPA’s projects in Arab state regions, including countries such as Syria, Yemen, Iraq, Sudan, and Somalia. Credit: Abdurrahman Warsameh/IPS

UNITED NATIONS, Feb 7 2020 (IPS) - The United Nations Population Fund (UNFPA) is appealing for $683million in their mission to address sexual and reproductive health services for women and girls in conflict areas in the world.

At the Humanitarian Action Overview 2020, launched on Thursday, the sexual and reproductive health agency highlighted the urgency with which the issue should be treated.

With more than 168 million people currently requiring humanitarian assistance in the world, UNFPA projects 45 million women, girls and young people will be affected by some kind of conflict this year.

For women and girls, sexual and health reproductive health rights have often come as secondary priority in crisis situations, but experts say it’s time to make them a primary concern.

“[These] types of service have long time been forgotten,” Arthur Erken, Director of UNFPA Division of Communications and Strategic Partnerships (DCS), told IPS. “It should not be an afterthought, it should be part and parcel of [the whole concern].”

“We’re focusing on women and what they’re going through because they’re on the front lines,”  Ann Erb Leoncavallo of UNFPA told IPS. “They’re trying to take care of their children, they’re getting pregnant, they’re having babies, they’re getting bombed, they’re suffering from floods, high waters, you name it.”

Leoncavallo added that many of the women in areas of conflict might head single-parent households or have their own trauma. “They get depression, they get traumatised because they faced increased of gender-based violence,” she said.

The $683 million will be used for efforts towards women’s reproductive and sexual health rights across 57 countries, of which about $300 million will be directed towards  UNFPA’s projects in Arab state regions, including countries such as Syria, Yemen, Iraq, Sudan, and Somalia.

In order to help women reach out for help, unlearn their shame and stigma, UNFPA is currently working with a “safe space” for many women to take a break from their everyday activities.

The “women and girl safe spaces” is dedicated space in the refugee camps where women can come and meet with other women, share notes, relax, and have a safe environment to discuss concerns and ask for help, Erken explained.

“It’s safe, men are not allowed,” Erken said, adding that the purpose of the space is to put a lot of attention to calming women, giving them breathing space, and often counselling services.

He says there doesn’t seem to be any stigma about women coming into these spaces, pointing out refugee camps in Jordan that have the facility. He learned from some of the service providers the women do visit, when their kids are in school and their husband occupied.

Dr. Afrah Thabet Al-Ademi, a UNFPA medical doctor in Yemen who works with women who have escaped conflict, says education has a role to play in destigmatising these services for refugee population.

A staggering $100.5 million is being requested specifically for the crisis in Yemen, the highest on the list provided by UNFPA.

“A lot of women who are not educated, who feel targeted, and feel stigma to talk about their needs or family planning,” Al-Ademi told IPS.

She recalls one time when she was meeting with a woman who had just given birth and who had covered her baby with a headscarf.

“When she exposed the baby, I found that she covered the baby with a newsletter, she didn’t have clothes,” Al-Ademi told IPS.

As a result, UNFPA in Yemen is now developing a kit specifically for mothers of new borns, to be put in “health facility for any woman who comes in for deliver”.

“The clothes is like a dignity for her,” said Al-Ademi.

The “Mama Kit” has clothes for the baby, pads for the mother, blankets, and diapers, among other things for the newborn.

UNFPA is also allocating funds for Democratic Republic of Congo, Syria, Sudan, Bangladesh, and Venezuela to assist with sexual and reproductive health for the women in those countries.