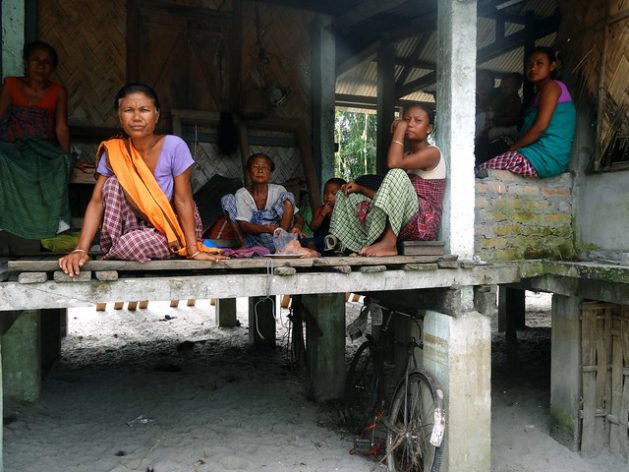 India is an Asian country with a middle-income economy. An increase of poverty is expected in Asian countries as a result of the economic recession linked to the coronavirus lockdowns. This dated photo shows women from the Mishing community in Dhemaji district. Credit: Priyanka Borpujari/IPS

UNITED NATIONS, Jun 12 2020 (IPS) - Global poverty, which is increasing because of the economic impact of the coronavirus crisis and ensuing worldwide lockdowns, is shifting and a dramatic increase in middle-income developing countries in Asia is expected.

This is according to new research published by the United Nations University World Institute for Development Economics Research (UNU-WIDER).

Andy Sumner, a professor of International Development at King’s College London and co-author of the report, told IPS that recent research which estimates the number of people who will be pushed into poverty because of the virus also shows that the increase in poverty could be an “absolute increase” for the first time in two decades.

“The potential increase in extreme poverty could mark the first absolute increase in the global count since 1999—and the first since 1990 in terms of the headcount ratio,” he told IPS.

The research estimates that the COVID-19 pandemic could push between 80 to 395 million people into extreme poverty globally, under the World Bank’s definition of poverty of people living under $1.90 per day. When measured with the World Bank’s upper threshold of the poverty line (people living under $3.20 and $5.50 per day) the estimate of people to be pushed into poverty is even higher at more than 500 million people.

Sumner, along with authors Eduardo Ortiz-Juarez of King’s College London and Chris Hoy of Australian National University, published the paper titled “Precarity and the pandemic COVID-19 and poverty incidence, intensity, and severity in developing countries” as a follow-up to their April report.

While the estimates remain similar to the ones made in April, Sumner said the key findings in this report show there will potentially be a major shift in the location of global poverty.

“The resources needed to lift the incomes of the poor to the poverty lines could increase by 60 percent, from $446 million a day in the absence of crisis, to above $700 million a day,” he explained.

Excerpts of the interview follow. Some of the answers have been paraphrased for clarity purposes.

Andy Sumner (AS): The root cause of poverty in many developing countries is a governance failure to put in place more redistributive policies. This is made difficult for developing countries given their place in the global economy. In the context of COVID-19, the situation is made worse as so many millions of people live just above the poverty line and are at risk of falling back into poverty.

IPS: Your report says “[the] potential effects that the current COVID-19 crisis could leave on poverty look more dramatic when focusing on the composition of global poverty since 1990.” Could you elaborate on this last part, about the ways in which the poverty arising out of COVID-19 could be more dramatic?

AS: There could be much more new poverty not only in countries where poverty has remained relatively high over the last three decades, but also in countries that are not among the poorest anymore. This points not only to their population size, but also suggests that much of their previously poor people moved to just above the poverty line, and as a result implying that the recent progress they achieved has been relatively fragile.

IPS: What is an indicator of the “intensity and severity of poverty” you mentioned in your report. How would the middle-income countries’ increase in poverty affect the distribution of global poverty?

AS: For “intensity and severity of poverty,” we estimate the daily income losses among the existing poor and new poor. As for the terms of the middle-income countries’ increase in poverty, many of them are in Asia, and are populous. As a result, changes in poverty in middle income countries will tend to shift the pattern of global poverty towards Asia.

IPS: One of your findings is also that “The resources needed to lift the incomes of the poor to the poverty lines, as indicated by the poverty gap, could increase by 60 percent, from $446 million a day in the absence of crisis to above $700 million a day under a 20- percent contraction.” Are governments and world leaders prepared with these resources? In the event these  resources are not met with, how will it further impact poverty levels?

AS: Governments in developing countries have started to try to address the poverty impacts of COVID-19 through increasing the size and coverage of social protection payments. This reflects a tiny fraction of what G7 countries have spent on their own economies.