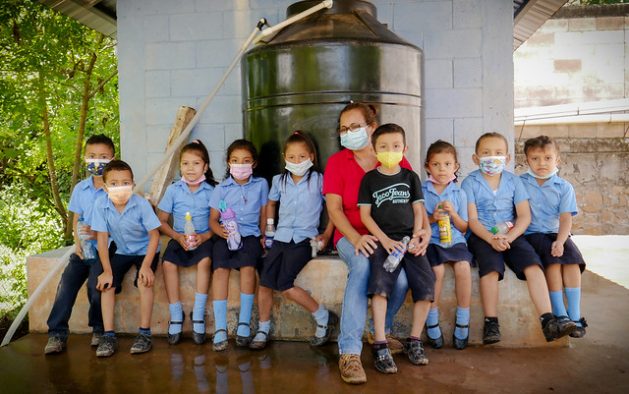 Angélica María Posada, a teacher and school principal in the village of El Guarumal, in eastern El Salvador, poses with primary school students in front of the school where they use purified water collected from rainfall, as part of a project promoted by FAO and Mexican cooperation funds. The initiative is being implemented in the countries of the Central American Dry Corridor. CREDIT: Edgardo Ayala/IPS

SENSEMBRA, El Salvador , Jun 23 2021 (IPS) - At the school in El Guarumal, a remote village in eastern El Salvador, the children no longer have to walk several kilometers along winding paths to fetch water from wells; they now “harvest” it from the rain that falls on the roofs of their classrooms.

“The water is not only for the children and us teachers, but for the whole community,” school principal Angelica Maria Posada told IPS, sitting with some of her young students at the foot of the tank that supplies them with purified water.

The village is located in the municipality of Sensembra, in the eastern department of Morazán, where it forms part of the so-called Central American Dry Corridor, a semi-arid belt that covers 35 percent of Central America and is home to some 11 million people, mostly engaged in subsistence agriculture.

In the Corridor, 1,600 kilometers long, water is always scarce and food production is a challenge, with more than five million people at risk of food insecurity.

In El Guarumal, a dozen peasant families have dug ponds or small reservoirs and use the rainwater collected to irrigate their home gardens and raise tilapia fish as a way to combat drought and produce food.

"We are all very proud of this initiative, because we are the only school in the country that has a (rainwater harvesting) system like this.” -- Angélica María Posada

This effort, called the Rainwater Harvesting System (RHS), has not only been made in El Salvador.

Similar initiatives have been promoted in five other Central American countries as part of the Mesoamerica Hunger Free programme, implemented since 2015 by the United Nations Food and Agriculture Organisation (FAO) and financed by the Mexican Agency for International Development Cooperation (Amexcid).

The aim of the RHS was to create the conditions for poor, rural communities in the Dry Corridor to strengthen food security by harvesting water to irrigate their crops and raise fish.

In Guatemala, work has been done to strengthen an ancestral agroforestry system inherited from the Chortí people, called Koxur Rum, which conserves more moisture in the soil and thus improves the production of corn and beans, staples of the Central American diet. 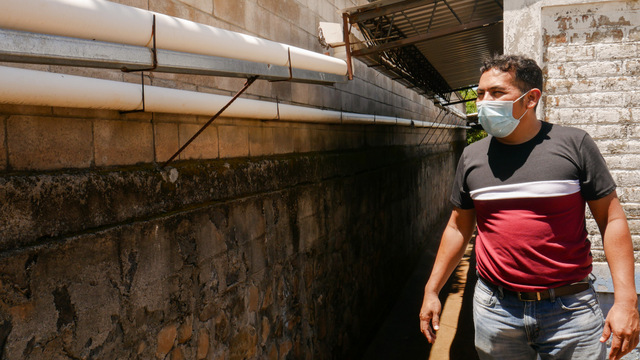 José Evelio Chicas, a teacher at the school in the village of El Guarumal, in El Salvador’s eastern department of Morazán, supervises the PVC pipes that carry rainwater collected from the school’s roof to an underground tank, from where it is pumped to a filtering and purification station. The initiative is part of a water harvesting project in the Central American Dry Corridor. CREDIT: Edgardo Ayala/IPS

“The best structure for conserving water is the soil, and that is where we have to work,” Baltazar Moscoso, national coordinator of Mesoamerica Hunger Free, told IPS by telephone from Guatemala City.

The principal of the El Guarumal school, where 47 girls, 32 boys and several adolescents study, said that since the water collection and purification system has been in place, gastrointestinal ailments have been significantly reduced.

“The children no longer complain about stomachaches, like they used to,” said Posada, 47, a divorced mother of three children: two girls and one boy.

Before it is purified, the rainwater that falls on the tin roof is collected by gutters and channeled into an underground tank with a capacity of 105,000 litres. 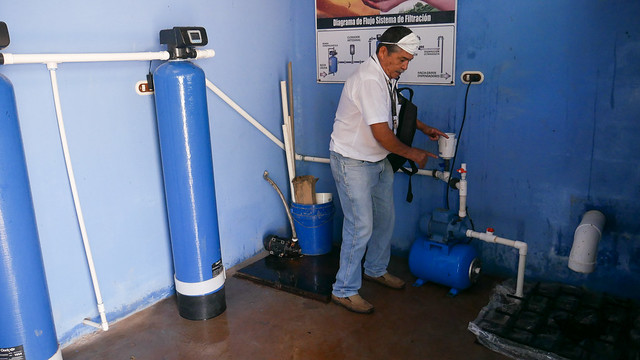 Farmer Cristino Martínez feeds the tilapia he raises in the pond dug next to his house in the village of El Guarumal in eastern El Salvador. A dozen ponds like this one were created in the village to help poor rural families produce food in the Central American Dry Corridor. CREDIT: Edgardo Ayala/IPS

It is then pumped to a station where it is filtered and purified, before flowing into the tank which supplies students, teachers and the community.

The school reopened for in-person classes in March, following the shutdown declared by the government in 2020 to curb the spread of the COVID-19 pandemic.

“We are all very proud of this initiative, because we are the only school in the country that has a system like this,” added the principal.

There are 40 families living in El Guarumal, but a total of 150 families benefit from the system installed in the town, because people from other communities also come to get water.

A similar system was installed in 2017 in Cerrito Colorado, a village in the municipality of San Isidro, Choluteca department in southern Honduras, which benefits 80 families, including those from the neighbouring communities of Jicarito and Obrajito. 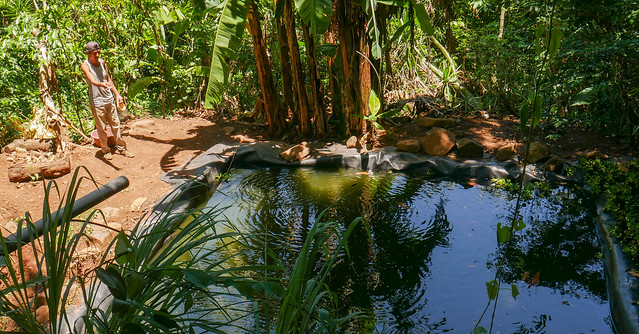 Rainwater is filtered and purified in a room adjacent to the classrooms of the school in the village of El Guarumal, in the eastern department of Morazán, El Salvador. Gastrointestinal ailments were reduced with the implementation of this project executed by FAO and financed by Mexican cooperation funds. CREDIT: Edgardo Ayala/IPS

About 20 minutes from the school in El Guarumal, following a narrow dirt road that winds along the mountainside, you reach the house of Cristino Martínez, who grows tomatoes and raises tilapia in the pond dug next to his home.

The ponds are pits dug in the ground and lined with a polyethylene geomembrane, a waterproof synthetic material. They hold up to 25,000 litres of rainwater.

“The pond has served me well, I have used it for both the tilapia and watering tomatoes, beans and chayote (Sechium edule),” Martínez told IPS, standing at the edge of the pond, while tossing food to the fish.

The cost of the school’s water harvesting system and the 12 ponds totaled 77,000 dollars.

Martínez has not bothered to keep a precise record of how many tilapias he raises, because he does not sell them, he said. The fish feed his large family of 13: he and his wife and their 11 children (seven girls and four boys).

And from time to time he receives guests in his adobe house.

“My sisters come from San Salvador and tell me: ‘Cristino, we want to eat some tilapia,’ and my daughters throw the nets and start catching fish,” said the 50-year-old farmer. 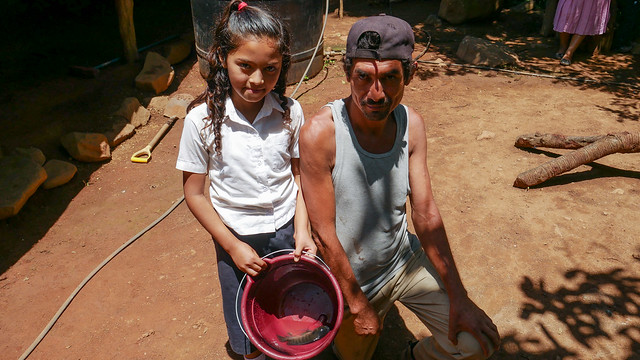 Cristino Martínez and one of his daughters show the tilapia they have just caught in the family pond they have dug in the backyard of their home in the village of El Guarumal in the eastern department of Morazán, El Salvador. The large peasant family raises fish for their own consumption and not for sale. CREDIT: Edgardo Ayala/IPS

According to FAO estimates, the ponds can provide about 500 fishes two to three times a year.

The ponds are built on the highest part of each farm, and the drip irrigation system uses gravity to water the crops or orchards planted on the slopes.

Tomatoes are Martínez’s main crop. He has 100 seedlings planted, and manages to produce good harvests, marketing his produce in the local community.

“The pond helps me in the summer to water the vegetables I grow downhill,” another beneficiary of the programme, Santos Henríquez, also a native of El Guarumal, told IPS.

Henríquez’s 1.5-hectare plot is one of the most diversified: in addition to tilapias, corn and a type of bean locally called “ejote”, he grows cucumbers, chili peppers, tomatoes, cabbage and various types of fruit, such as mangoes, oranges and lemons.

“We grow a little bit of everything,” Henríquez, 48, said proudly. He sells the surplus produce in the village or at Sensembra.

However, some beneficiary families have underutilised the ponds. They were initially enthusiastic about the effort, but began to let things slide when the project ended in 2018. 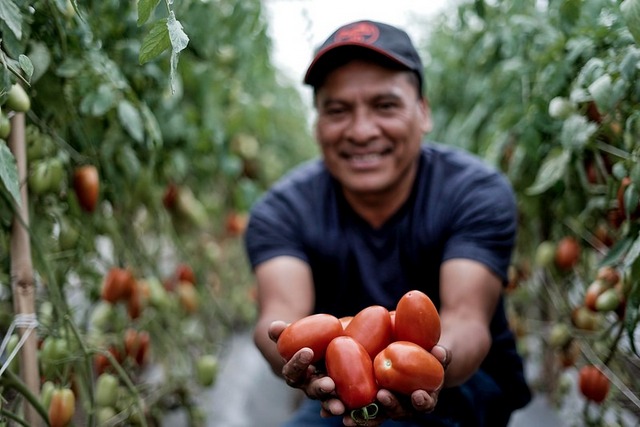 A farmer proudly displays some of the tomatoes he has grown in the region known as Mancomunidad Copán Chortí in eastern Guatemala, which includes the municipalities of Camotán, Jocotán, Olopa and San Juan Ermita, in the department of Chiquimula. Water harvesting initiatives have been implemented in the area to improve agricultural production in this region, which is part of the so-called Central American Dry Corridor. The initiative is supported by FAO and Mexican cooperation funds. CREDIT: FAO Guatemala

An ageold Chorti technique in Guatemala

In Guatemala, meanwhile, some villages and communities are betting on an agroforestry technique from their ancestral culture: Koxur Rum, which means “wet land” in the language of the Chortí indigenous people, who also live in parts of El Salvador and Honduras.

The system allows corn and bean crops to retain more moisture with the rains by combining them with furrows of shrubs or trees such as madre de cacao or quickstick (Gliricidia sepium), a tree species that helps fix nitrogen in the soil.

By pruning the trees regularly, leaves and crop stubble cover and protect the soil, thereby better retaining moisture and nutrients.

“Quickstick sprouts quickly and gives abundant foliage to incorporate into the soil,” farmer Rigoberto Suchite told IPS in a telephone interview from the village of Minas Abajo, in the municipality of San Juan Ermita, Chiquimula department in eastern Guatemala, also located in the Central American Dry Corridor.

Suchite said the system was revived in his region in 2000, but with the FAO and Amexcid project, it has become more technical.

As part of the programme, some 150 families have received two 1,500-litre tanks and a drip irrigation system, he added.

“Now we are expanding it even more because it has given us good results, it has improved the soil and boosted production,” said Suchite, 55.

In the dry season, farmers collect water from nearby springs in tanks and, using gravity, irrigate their home gardens.

“Many families are managing to have a surplus of vegetables and with the sales, they buy other necessary food,” Suchite said.

The programme is scheduled to end in Guatemala in 2021, and local communities must assume the lessons learned in order to move forward.