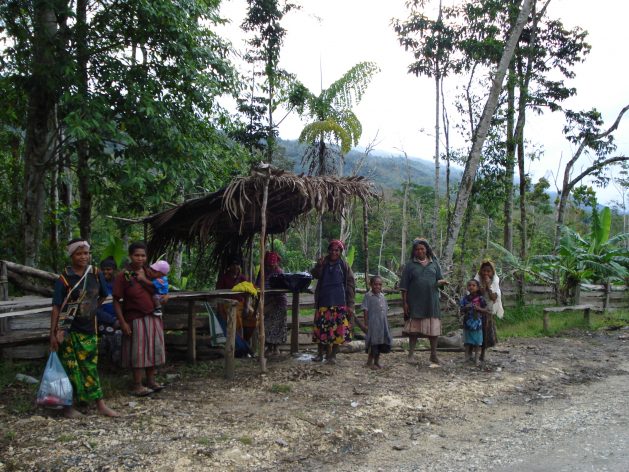 Logistic and communication challenges to rolling out the COVID-19 vaccine are immense in the rural and remote highlands region of Papua New Guinea. Credit: Catherine Wilson

CANBERRA, Australia , Jul 13 2021 (IPS) - Papua New Guinea (PNG), like many other Pacific Island countries, successfully held COVID-19 at bay last year, aided by early shutting of national borders. However, by March this year, the pandemic was surging in the most populous Pacific Island nation, and by July, it had reported 17,282 cases of the virus and 175 fatalities.

PNG has a steep battle against the virus ahead, made more problematic by a high rate of refusal by health workers to take the vaccine. PNG’s Health Minister, Jelta Wong, stressed in an interview with Australia’s Lowy Institute for International Policy in April that “the vaccine will be the key to containing COVID-19 in our country.”

But in Eastern Highlands Province in the country’s rural interior, Dr Max Manape, the province’s Director of Public Health, told IPS that “in our province, there is a huge COVID-19 hesitancy due to so much negativity of COVID-19 vaccinations in social media and we are finding it very hard to convince our fellow frontline workers, including health workers.” By early July, only 23.3 percent of all health and essential workers in the province were vaccinated, including 329 health workers.

The situation is causing wider community concern. “Health workers are the frontline and first responders in this pandemic, and their refusal places them at a greater risk to contract the virus. This will lead to the feared collapse of our struggling health system, and the roll-on effect of other deaths from preventable diseases and maternal health issues created by a lack of manpower,” a spokesperson for the PNG National Council of Women told IPS.

In April, the country was supplied with 132,000 doses of the AstraZeneca vaccine, the first batch of a total supply of 588,000 doses by COVAX, the global alliance of organizations, including the World Health Organization (WHO), working to achieve equitable vaccine access. The Australian Government also supplied eight thousand doses. The national vaccination rollout began in early May, with priority given to frontline responders.

Yet progress has been very slow. By this month, only 59,125 people in a national population of about 9 million had been vaccinated, including 7,844 health workers. The largest group of healthcare recipients, about 1,150, were located in the capital, Port Moresby.

PNG’s Health Minister says there are numerous challenges to achieving widespread inoculation. “In this country, we’ve never had an adult vaccine go out, we’ve always had the children’s ones, and that has worked really well. It is going to be a real challenge for us to do this vaccination rollout…The biggest thing will be education. Our people need to be educated enough to know that this vaccine will help them in the future,” Wong said.

More than 80 percent of people in PNG live in rural and remote areas where logistic and communication challenges are the greatest. Here scepticism of the vaccine is high. Only 12 percent of all health and essential workers in remote Enga Province in the northwestern highlands region have been vaccinated. “The uptake of the vaccine is very poor in Enga Province. Frontline health workers at the hospital have mostly refused the vaccine,” Dr David Mills, Director of Rural Health and Training at Kompiam District Hospital in the province, told IPS.

However, it’s a nationwide issue. PNG’s newspaper, The National, conducted a public online survey last month, reporting that 77 percent of respondents did not want the vaccine. In May, a survey of students at the University of Papua New Guinea by the Crawford School of Public Policy at the Australian National University, Canberra, revealed a high level of indecision among respondents. Only 6 percent said they would accept the vaccine, 46 percent had not decided either way, while 48 percent planned to refuse it.

Doctors and health care leaders claim that major reasons for the low uptake are cultural and religious opposition, misinformation and conspiracy theories being touted on social media. And lack of public trust in the country’s health system, which, for decades, has struggled with an insufficient workforce, very poor infrastructure, and resources.

However, Dr Mills said that the government was very active in responding to conspiracy theories with facts and authoritative health information. “There is plenty of information, too much information. It’s a blizzard of information but sorting it out is the hard part. Keep in mind that there is a high level of mistrust and scepticism generally in this society. People don’t take anything at face value. It’s fertile soil for believing alternative hypotheses,” he said.

Confusion was one of the biggest reasons for indecision among respondents to the Australian National University’s survey. And they were more likely to trust the information provided by local Christian leaders (32 percent), followed by family and friends (31 percent) and the WHO (29 percent). In contrast, faith in the government as a source of information was negative (-8) percent, leading to the study’s conclusion that ‘distrust of institutions of authority and vaccine hesitance goes together.’

Despite having an economy based on natural and mineral resource wealth, PNG has a relatively low human development ranking of 155 out of 189 countries and territories, and basic service delivery beyond urban centres, hindered by lack of investment and corruption, has been deficient for decades. There are 0.5 physicians and 5.3 nurses per 10,000 people in the country, according to the WHO.

Distrust of the vaccine by healthcare staff has consequences. “High vaccine refusal amongst health workers, particularly nurses, confuses the general public and fosters vaccine scepticism. And unvaccinated health workers can be a danger to the very vulnerable patients that we have as inpatients in hospitals,” Professor Glen Mola, Head of Reproductive Health, Obstetrics and Gynaecology at the School of Medicine and Health Services, University of Papua New Guinea in Port Moresby, told IPS.

Although uptake by health staff in the capital could change following a new ruling at the Port Moresby General Hospital. “Recently, the hospital board approved a policy of the hospital management that any new health workers, contract renewals and trainees, like interns and medical students, must be vaccinated before they can enter the clinical care areas of the hospital,” Professor Mola said.

However, in the highlands, Dr Mills said the challenges were too great for vaccinating everyone. “For the broader population, vaccination was never going to be the way out (of the pandemic). The uptake is too small, the delivery too small, and delivery mechanisms too weak. We will get to herd immunity the hard way, which is by getting most people infected,” he claimed.

Nevertheless, in June, further funding of US$30 million was approved by the World Bank to boost PNG’s COVID-19 inoculation program, where it is now being offered to all citizens aged 18 years and over.