AGRICULTURE: A Better Banana For Africa

MOMBASA, Oct 14 2008 (IPS) - With the eyes of a predator and attention to detail of a master craftsman, Benjamin Maina combs the 100-acre Khosla plantation for fallen banana trees. The good health of this crop is everything to the many people whose lives depend on trading banana -– the best selling fruit in the world. 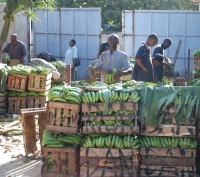 Disease-free plantations are essential to the production of the five billion dollars of bananas sold annually. Credit: Busani Bafana/IPS

Bananas are a staple in many parts of Africa and enjoyed as a fruit and food ingredient all over the world. But Africa’s potential banana boom is threatened by pests and diseases.

"The plants you see over there have fallen because of nematodes in the roots," Maina explains. "Nematodes are a big headache for us. We have to slash and burn the affected plants which means less plants and less money," says Maina, pulling a stem with roots from one of the affected plants to be sent for tests at a laboratory in Mombasa.

Just a 10-minute drive from Khosla Farm is the Kenya Agriculture Research Institute (KARI) in Mtwapa District, where farmers get advice on better production techniques and on how to control pests and diseases.

Each year, the research institute at Mtwapa distributes over 6,000 plantlets to smallholder farmers who buy them for just over $1 each. Mwinga and his colleague ensure that plantlets have produced at least four leaves before they are given to farmers for transplanting. KARI has used farmer field schools to introduce improved banana varieties.

"Bananas need tender care like babies," said Mwinga explaining that banana are heavy feeders, requiring a lot of water and nutrients to ensure they remain healthy and produce a better fruit.

"We have found that tissue culture bananas perform better in the field because they are more resistant to diseases than ordinary types of bananas. I have seen that when a banana is properly fed and has a lot of water, this reduces a lot of diseases." Mwinga says.

TC bananas mature early, helping farmers recover costs of buying the planting material when they sell their first crop. Depending on the variety, a good bunch of bananas may weigh up to 50 kg and sell for nearly $12.

According to the International Institute for Tropical Agriculture (IITA), farmers lose over $500 million to pest and diseases every year. For instance, the BXW can wipe out entire fields of bananas. Pisang awak, a susceptible exotic variety from Asia widely grown to make banana beer, is especially vulnerable.

Scientists like Professor Esther Kahangi advocate adopting tissue culture technology in Africa because it offers quick and en masse duplication of disease free planting material. Kahangi, based at Kenya's Jomo Kenyatta University of Agriculture and Technology, says diseases and pests need to be controlled if farmers are to enjoy rich pickings from each bunch of bananas they grow.

But despite its advantages of improving the health and yields in bananas, TC technology is not easily affordable for small holder farmers. Farmers around Mtwapa have often borrowed money from friends or taken a small loan from the bank if they cannot afford to pay for the plantlets from KARI.

But because tissue culture bananas mature faster and produce better fruit, most farmers have been able to recoup the costs of buying the planting material within a year.

"We cannot use costs as a limiting factor to reject the technology," Kahangi told the IPS. "We should be saying how do we make the technology accessible and affordable to farmers."

The IITA together with Bioversity International hosted an international Banana Conference in Mombasa in October, focused on harnessing partnerships to increase research impact. Conference participants discussed new production techniques as well as inexpensive and environmentally-friendly management practices for protecting plants from diseases and pests.

Working with international and regional partners, IITA are using genetic modification to produce bananas with a better yield and resistance to diseases. A genetically-modified banana is being developed and work has been going on since BXW was first reported in 2001.

Contained trials for Genetically-modified (GM) bananas are currently being done by Uganda's National Agricultural Research Organisation (NARO). These trials could provide hope to farmers and traders for whom healthy bananas mean business.