KABUL, Aug 12 2009 (IPS) - Carpet weaving has long been a part of Afghanistan’s history and culture. 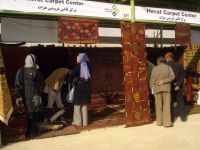 Though it is unclear exactly when Afghans began making carpets, it is believed that long ago, women poured their emotions into the carpets they created, telling stories of hero’s and prophets. Since that time, carpets have come to symbolise Afghan national dignity and stand as a testament to the creativity of her people.

Monawar Shah Haqbin, an Afghan historian, says that when kings in Afghanistan wanted to bestow precious gifts on one another, carpets were usually their first choice.

Also, when women wanted to marry, carpets were a crucial part of any dowry. Even today, when Afghan celebrities or public officials make an appearance during times of national celebration, they often do so on a red carpet, weaved by Afghan craftsmen.

Now, carpet weaving has an even more vital role as one of the few viable industries left in Afghanistan.

It is easy to set up a loom in the home and the materials for getting started are inexpensive and easily obtainable. Women can pick up the skill and make money for their families without having to leave the home and children.

While the northern part of Afghanistan has traditionally been the carpet-production epicentre of the country, since the Taliban came to power in the 1990’s, the importance of Kabul to carpet production has grown. Women who could no longer go to school or work because of Taliban restrictions, could still make money by weaving carpets.

After the regime was toppled, the new government undertook many initiatives to train and monetise carpet production by Afghan women.

But still, the lack of large-scale resources to cut, wash and finish these carpets has crippled Afghanistan’s ability to fully capitalise on one of its most valuable commodities. Experts say that until the government provides resources for start-to-finish production of Afghan carpets, the profit from these products will continue to go to those outside Afghanistan’s borders.

Pakistan, Afghanistan’s southern neighbour, has taken advantage of its proximity to the highest quality carpets in the world. The government of that country has made the carpet business easy for manufacturers and exporters.

Mohammad Esau, a former Afghan warlord who owns a carpet shop in the Pakistani town of Atak, says that Afghans in the area are currently operating hundreds of carpet factories. He adds that Pakistan’s government has even offered him and other weavers citizenship, enticing them to make permanent homes on that side of the border.

A significant number of native Pakistanis are also involved in the carpet production business, but they tend to work in the finishing stages of production unavailable in Afghanistan, while the Afghans are responsible for the weaving and looming.

Pakistan’s government has also made it easier for carpet producers to do business. They lend as much as 80 percent of initial investment capital to producers and give 13 percent tax credits on each shipping container full of carpets exported out of the country.

By comparison, the Afghan government’s attempts to prop up the carpet industry are woefully inadequate.

In August 2007, the Afghan government held an inaugural carpet exhibition, called ‘Let’s Cover The World’, in Kabul. Solyman Fatemi, former executive director of the Association of Promotion of Afghan Exports and Ahmad Zia Massoud, vice president of the Economic Committee in Government, pledged that “by opening a bridge of friendship between Afghanistan and Tajikistan, Afghan handicrafts and carpet exports will be increased.”

The officials promised help with marketing and other promotional assistance, and also land-grants for carpet producers to build factories. But like so many promises from the government, Barik Andish says, no marketing was ever done and the land grants never materialised.

Mollem Salman Taj, who exports carpets from Pakistan to the wider world, says that while Afghan carpets have a superb reputation as the finest available, three decades of war have caused a rift between international carpet dealers and Afghan producers.

Taj says that marketing is the key for Afghanistan to re-establish its dominance of the carpet market. This would both help Afghanistan as an international brand, and perhaps entice Afghan carpet weavers who have fled to Pakistan or Iran to come back home.

There are still many native Afghans who have chosen to stay here and ply their craft. Sareqi, Gul-e-Barjaste, Zaher Shahi, Mashvani, Turkmani, Khal Mohammadi, Gul-Muri are the names of just a few of the 173 traditional Afghan carpet styles that are still produced almost exclusively in this country.

But exclusively is different from entirely. While these carpets are fabricated here, they are “finished” that is, cut, washed and completed in Pakistan. After the rugs are completed, they are affixed with a ‘Made in Pakistan’ label and shipped to buyers in Italy, France and Germany.

Part of the reason that the entire production process can’t take place in Afghanistan is due to a lack of resources. Noor Ghori, who makes carpets in Afghanistan, says that cutting and dying of the carpets takes equipment and materials that Afghan producers can’t afford.

As a result, the world loses a traditional Afghan product, and Afghans lose the full profit of their hard work and craftsmanship.

(*This is the second of a two-part investigative series on Afghanistan’s famed carpet industry by Killid Weekly. IPS and Killid Media, an independent Afghan group, have been partners since 2004.)