KANO, Nov 27 2009 (IPS) - Nigeria ratified the Convention on the Elimination of Discrimination Against Women (CEDAW) in 1985 without reservations. But few of its citizens have ever heard of the document. Day-to-day life for women in Nigeria is shaped less by international conventions than it is by the diverse cultures, traditions and religions found in the country. 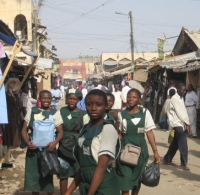 Twenty-four years after ratification of CEDAW, early marriage - and with it, the end of many girls' education - is just one of the persisting obstacles to gender equality in Nigeria. Credit: Nicholas Reader/IRIN

Hauwa Usman* is a recently-widowed woman from Fanisau village near the northern Nigerian city of Kano. Slim and dark-skinned, this young woman’s face carries signs of long, exhausting emotional strain. She says she was born during the Murtala Muhammed regime, making her 33 or 34 – a little older than CEDAW.

Article 16 of CEDAW confirms that men and women have the same right to choose a spouse and to enter into marriage; it also says that the marriage of a child has no legal force – instead requiring that laws specifying a minimum age for marriage be passed.

About the time Nigeria ratified the convention, Usman was married off to a man 12 years her senior. From the time 10-year-old Hauwa moved into her marital home, her husband was a stern and distant presence, believing that his young bride – or any woman – would not respect him if he so much as smiled at her.

Usman says her deceased husband treated her like a slave; she was never asked her opinion on domestic matters, just given orders to do this, do that.

Usman has given birth to nine children, delivering all of them at home with the aid of her in laws and traditional birth attendants. Four of the births, she says, involved complications that almost cost her her life.

Like a good number of men in Nigeria’s north, her husband hated the idea of women visiting hospitals because they do not want their wives to be examined by male doctors, believing this is against their culture and religious beliefs. Whenever she fell ill, it required her husband’s friends’ pleading to be allowed to go to a clinic.

Article 16.2 states: The betrothal and the marriage of a child shall have no legal effect, and all necessary action, including legislation, shall be taken to specify a minimum age for marriage.

Article XXI of the 1990 African Charter on the Rights and Welfare of the Child, to which Nigeria is also a signatory, states: Child marriage and the betrothal of girls and boys shall be prohibited and effective action, including legislation, shall be taken to specify the minimum age of marriage to be eighteen years.


When her husband died, she thought she would at last gain some freedom. But instead her in-laws and her parents started to discuss marrying her husband’s younger brother, whose first wife she has never been on good terms with.

Usman believes her life would have been a very different story if she had gone to school instead of being married off so early to a husband she never loved. But she also believes Hausa culture frowns on a woman revealing her marital secrets, and she lived under hardship in silence through her marriage that terminated a year ago.

So where is the protection?

The closely-linked questions of girls’ education and early marriage are two of the most prominent issues put forward by campaigners in support of the implementation of CEDAW in Nigeria. Twenty-four years after ratification, the convention’s supporters are well aware of the obstacles to ending discrimination on these and other questions.

“(Even) if CEDAW is accepted and implemented at the federal level in Nigeria, it will certainly face opposition in the states, due to some provisions (which challenge) religious and cultural values. But the focus should be on how to deal with such opposition,” says Fatima Kwaku.

Kwaku was an active member of the CEDAW monitoring committee from 2001 to 2004 and has remained involved in holding government accountable. Herself a Muslim, and a barrister, she knew the opposition that the Convention would face on issues like marriage.

She stresses that CEDAW must be advocated with great care, so that people get the correct message and the intended changes in women’s status are acceptable amongst the people at the grassroots levels. This, she said, calls for the document and new laws passed to implement to be framed in such a way as to avoid unnecessary hostility from religious or other cultural forces without sacrificing their empowering content.

Aminu Ibrahim, also lawyer, has a more positive view of what CEDAW has accomplished in Nigeria.

“Women have become fully active in Nigerian politics, which was not the case before,” he offers as one example. “And there are so many non-governmental organisations advocating to women about family planning.”

He remarked that while the Convention might be well-suited to fighting discrimination against women on the global scale, its implementation was destined to be awkward in local situations, such as in Kano where he says the Hausa community – including what he terms its “naturally reserved women” – view with suspicion.

Ibrahim and Kwaku both seem to accept that many types of discrimination are too deeply entrenched to be tackled directly in the near future.

“The only option is to put those sections regarded as controversial on hold for the time being, and implement the remaining non-controversial sections. Half a loaf of bread is better than none, and with time things will change.” Kwaku says.

For CEDAW to take root in Nigeria, state and federal governments must show political will and commitment through allocating financial and human resources across sectors. CEDAW must also be seen as a social responsibility for all, rather than the governments alone.

“There must be full awareness creation to ensure acceptance and full utilisation of the convention at all levels. It is a critical challenge as far as the domestication process is concerned,” she says, stressing that it worries her that 24 years after ratification, CEDAW still seems as foreign as the country in which governments met to draft it.

“By now the word CEDAW should have been common even to the housewives in Nigeria, if it was regarded seriously by the governments,” said Kwaku. “It must be integrated into school curriculum so that the young will have the concept of non-discrimination imbibed into them,” said Kwaku.

No country has achieved 100 percent compliance, she says.  “Yet we the Nigerian women will remain optimistic about the success and full implementation of CEDAW in the near future.

Perhaps not soon enough for Hauwa Usman, whose childhood ended abruptly just as the Convention that should have guaranteed a ten-year-old girl time and space to grow was adopted.