How to Spend Environmental Funds

MONTEVIDEO, May 24 2010 (IPS) - The world’s multilateral credit institutions have often faced the criticism that they cause more problems than they prevent. As the challenges increase, such as those posed by climate change, the debate is shifting to environmental financing. 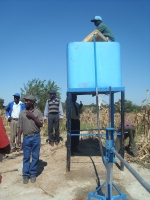 Villagers in Shamva, Zimbabwe, test a prototype of a water pump and tank for irrigating their gardens. Credit: Vusumuzi Sifile/IPS

The Fourth Assembly of the Global Environment Facility (GEF), being held May 24-28 in the Uruguayan resort city of Punta del Este, seems a propitious occasion to ask the question: Does financing for the environment work?

Shamva, an area in northern Zimbabwe, was known decades ago for its tobacco, maize, cotton, beans and coffee, which grew without using irrigation. But there is less and less rain, and rivers have dried up, in part due to deforestation.

Although the last harvest left many dinner plates empty, Shamva was not on the national list of those in need of food aid “because of the general perception that Shamva is an agriculturally productive area,” local activist Isaac Chidavaenzi told Tierramérica.

With the initial funds, many dug their wells. But due to delays in the required reports from the Chengaose Trust, the local partner, the GEF did not release the remaining 20,000 dollars, which were necessary to install pumps, tanks and pipelines to irrigate the villagers’ gardens.

“I have water, but the problem is how to take it to the garden,” said Goodreach Masuku, one of the farmers who met May 10 with the GEF/SGP officials.

More and more people want to have their water well, said Khethiwe Mhlanga, national GEF/SGP coordinator. “Ours is a pilot project that should show the way for many others to copy and follow… but there is a real struggle to keep within those numbers,” she told Tierramérica.

In the last three years, the GEF/SGP has assisted 30 communities in Zimbabwe, spending 1.2 million dollars — not much for a country of 11.4 million people submerged for years in agricultural and institutional crises.

The Small Grants Programme handles less then one percent of the money from GEF, the leading international financial organisation dedicated to the environment. The Facility was created by the World Bank in 1991, when that institution was battered by criticism for promoting environmentally destructive investments.

Today, “even the fierce critics of GEF think it is wonderful,” Zoe Young, author of the 2002 book “A New Green Order? The World Bank and the Politics of the Global Environment Facility,” told Tierramérica in a phone interview.

The money “is going to small local groups who know the locations, know what needs to be done for particular conservation efforts, and that money is working,” she said, but added that it has not been an efficient financing model when it involves billions of dollars.

Far from Zimbabwe, in the Caribbean island nation of Cuba, a biodiversity protection programme received 10 million dollars from the GEF, distributed since 1993 amongst three projects.

The focus is the Camagüey Savanna Ecosystem, which covers 19,000 square kilometres of watersheds and more than 2,500 small islands, or keys, along the north coast. The area is home to 2.3 million people.

The aim of the project is to harmonise tourism, farming, forestry and fishing, without damaging the rich local environment. In addition to the GEF, there are contributions from the Cuban government, the United Nations Development Programme (UNDP), Canadian cooperation and the Worldwide Fund for Nature, UN official Gricel Acosta told Tierramérica.

Mangroves, marine grasslands and coral reefs, with an abundance of endemic species, are emblematic of the area. After 17 years, the initiative is in its third phase, and what has been learned can be applied in other areas, said researcher María Elena Perdomo, of the Environmental Research and Services Centre, in Villa Clara province.

Perdomo told Tierramérica that she values “the capacities to deepen knowledge about the resources and help in the search for alternatives for the sustainable use of biodiversity.”

According to Maria Athena Ballesteros, of the World Resources Institute, for countries like Mexico and those from the Caribbean that are adopting low- carbon production models, the GEF “should consider meeting the initial high costs of those low-carbon options.”

For example, “Mexico is supporting a sustainable transport initiative. They would probably benefit from some grant money to support human, institutional, and technical capacity,” Ballesteros said.

“The question is, does GEF have the capacity to back the most promising technologies in developing countries, to support policy innovations and investments towards real transformation, which is what is necessary to stop climate change?” Ballesteros said.

When money is limited, tough choices have to be made.

To date, the GEF has provided 8.7 billion dollars in grants for more than 2,400 environmental projects in 165 developing countries and emerging economies. The funds pledged for the next four years total 4.25 billion dollars, less than half what is considered necessary by the North American network of non-governmental organisations accredited by the Facility.

But from another perspective, the problem isn’t money.

Do we really need a global financial institution to fund efforts to confront problems like climate change, biodiversity loss and desertification?

“These are serious problems… Money would help, yes, and some action is needed, but my answer is no,” said Zoe Young.

When the GEF was created, “it was a proposal that environmental expertise should go into shaping every project of the World Bank and of all the international public finance entities,” she said.

“If you took these billions of dollars and all these experts and used them to establish international regulation for energy efficiency, industrial standards, multinational energy companies, safe emissions levels… so many people could benefit,” said Young.

In her view, creating a climate change fund is a futile effort. “If you have good standards for all the investments and the public money goes to setting those standards, then you don’t need all these strange inventions like carbon market and carbon offsetting” for greenhouse gas emissions, she said.

But the GEF exists and has been gaining influence since it became independent of the World Bank in 1994, though the Bank is still responsible for its administration.

Today the GEF is the economic instrument of the UN conventions on climate change, persistent organic pollutants, biodiversity and desertification, among other functions.

* Ephraim Nsingo (Harare), Matthew Cardinale (Atlanta) and Patricia Grogg (Havana) contributed reporting. This story was originally published by Latin American newspapers that are part of the Tierramérica network. Tierramérica is a specialised news service produced by IPS with the backing of the United Nations Development Programme, United Nations Environment Programme and the World Bank.