MANILA, Apr 14 2011 (IPS) - In a country where an estimated 4,500 women die every year due to complications during childbirth, the enactment of a reproductive health (RH) policy is said to be a measure that could save lives. 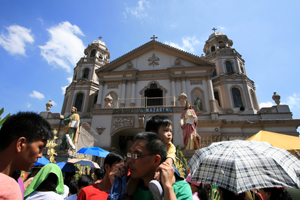 Catholics attend mass outside the Quiapo Church in Manila. 80% of the Philippines is Catholic, and the Church sanctions only natural family planning. Credit: Kara Santos/IPS

The Catholic Church has been very vocal in its opposition to a RH policy in the country, but not all religious organisations agree.

In a press conference dubbed ‘To Sin or not to Sin: The Views of Other Churches on RH’, representatives from different faith-based organisations expressed their support for the passage of the highly debated House Bill 4244 or the ‘Responsible Parenthood, Reproductive Health and Population Development Act of 2011’ and its Senate counterpart.

“We support the RH Bill because it is pro-life, it is pro-development and it is pro-poor,” said Bishop Efraim Tendero, of the Philippine Council of Evangelical Churches (PCEC).

PCEC is the largest network of evangelical Christians in the Philippines and is composed of 25,000 evangelical churches, 66 denominations, and 150 community and mission organisations.

Addressing concerns of the Catholic Church that the bill would promote a “culture of death” by allowing artificial contraceptive methods, Tendero had this to say: “Life begins at fertilisation. Therefore if there is no fertilisation, there is no life yet. The use of artificial contraception is not taking away life because life has not yet started.”

Eduardo V. Manalo, executive minister of Iglesia ni Cristo to the Committee of Population and Family Relations, said that many of society’s worsening ills could be traced to families “growing so large that an increasing number of parents cannot provide the most basic human needs to their families.”

“The Bible states that a parent who does not provide for the needs of his own household is worse than an unbeliever. (I Tim 5:8),” Manalo said. “Since modern methods of contraception – by preventing married couples from having unwanted pregnancies – assist in supporting this Christian principle, we support their use,” according to the statement.

Iglesia ni Cristo is the largest entirely indigenous Christian religious organisation in the Philippines, and the largest independent church in Asia.

Bishop Rodrigo Tano of the Interfaith Partnership for the Promotion of Responsible Parenthood (Interfaith) claimed that if the Catholic Bishops Conference of the Philippines (CBCP) professed to value the dignity of every human person, they should have more respect for human rights.

“To allow the deaths of mothers and babies because of a lack of a national policy is almost criminal,” said Tano, citing figures of maternal and infant deaths in the country.

According to the United Nations Population Fund (UNFPA), maternal deaths in the Philippines are one of the highest in the region. An estimated 11 women die every day in the country due to complications during pregnancy – most of these deaths are preventable. The problem is said to be particularly severe within the Muslim communities in Mindanao, where as many 320 mothers died per 100,000 live births according to the UN.

The Philippines has one of Asia’s fasted-growing populations, which is nearing the 100 million mark.

Tano also said that he was disturbed by the use of ambiguous terms, the lack of clarity in medical terms, and claims of the CBCP that there is no relation between population size and poverty.

“We should go by evidence and not by ecclesiastical declarations,” said Tano. “Evidence shows that families are unable to maintain their income, expenditures and savings as their size increases. The incidence of child labour also rises as family size increases.”

Linatoc expressed his support for the bill saying that it would affirm a better quality of life for families and ensure better health for women.

Ernesto Pernia, of the University of the Philippines School of Economics and a representative of Catholics for Reproductive Health (CRH), agreed that there is a morality issue that needed to be addressed.

“Our bishops in CBCP can not say that practicing RH is sinful in the Philippines, but it is not in Mexico, Argentina, Brazil, Spain, Ireland and Italy because Catholics there practice family planning as a matter of course,” Pernia said. “The Catholic Church does not stand in the way of the government promoting or implementing a population policy.”

Pernia pointed out that the Philippines is the only Catholic country that has not addressed its population issue. He added that the having a reproductive health policy would promote human development and a “life of dignity” rather than a “life of misery”, which is what many people who cannot properly care for their children are currently facing.

Ramon San Pascual of the Philippine Legislators’ Committee on Population and Development Foundation, Inc. (PLCPD), said that churches support the passage of the RH bill as they know their members would benefit from it.

“We do not understand why some leaders of the Catholic Church are so stubborn that they refuse to see the issue in the perspective of their parishioners who in fact clamour for RH education and services,” said San Pascual.

Around 80 percent of the Philippines population is Catholic – and the Catholic Church sanctions only natural family planning methods.

Meanwhile, Pernia says that there were many priests, nuns and theologians who supported the bill as individuals but were still afraid to come out openly in support of it.

Following reports of the recent resumption of dialogue between the government and the Catholic hierarchy on RH, Elizabeth Angsioco, national chairperson of the Democratic Socialist Women of the Philippines (DSWP) said that other religions and women’s groups in the country deserve to be heard.

“The President should be reminded that the country is not 100 percent Catholic. It is only right that he listens to other religious leaders,” Angsioco said.