KINSHASA, Jun 27 2011 (IPS) - In recent months, no one in the Congolese capital has been spared the effects of water shortages. Where spending entire days criss-crossing Kinshasa in search of water with battered containers in hand was previously the unhappy task of women and children, now men in suits have joined the fray. 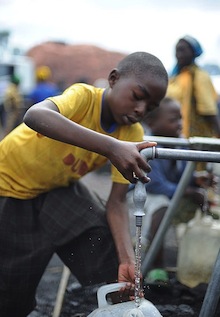 “I know of many of my friends whose official vehicles are shuttling back and forth to bring water to their homes each day,” says Félicen Kabamba Tino, at the Faculty of Science at the University of Kinshasa. “Here at the university, the lecturers come with their jerry cans and other receptacles to get water at the administrative building.”

Fidèle Mwaku, an associate professor at the National Pedagogy University, agrees. “I had a friend from the Plateau des Professeurs neighbourhood [popular for university lecturers] come to draw water at my house in Lemba.”

Mwaku says households across the city are doing the same to deal with the situation. Kinshasa’s poorer residents have long been resigned to this state of affairs.

“We’ve been waiting a week for water, and the last time we had it, it came at three in the morning only to stop again a few hours later,” complains Judith Kapenda, mother of four, in the Kinshasa commune of Kintambo.

“I spent a day in Selembao [another area of the city] and what I saw there was terrible,” says Michel Kalumvueziko, the provincial executive secretary of the Action Committee for Water and Sanitation. “Men, women and children in the street searching for water. The situation made me feel sick, to see so many people in the street, all searching for water.”

The impact of water scarcity is manifested in waterborne diseases which affect many poor families.

The water supply problems in Kinshasa are a painful irony, since the city and the Democratic Republic of Congo as a whole have ready access to immense water resources: the Congo River, the world’s second largest river system, discharges itself into the Atlantic at Kinshasa.

Many residents also find it hard to understand the severe shortages in light of the numerous water treatment plants operated in and around the city by the public water utility, REGIDESO – Kinshasa boasts six such facilities.

“I live in Bumbu, a commune in Kinshasa West,” says Fidèle Ipama, a leader in the Mbandaka district. “This part of the city doesn’t get potable water although there is a water reservoir in [neighbouring] Selembao.”

REGIDESO says the water utility’s poor performance is partly due to aging infrastructure, such as the Lukunga waterworks. Lukunga, with a capacity of just 48,000 cubic metres a day, must serve a million residents in two districts of Kinshasa, according to David Ekwanza, director of operations at REGIDESO. The plant was built by the Belgian colonisers in 1939 and has not been substantially refurbished since.”

The World Bank-supported Urban Potable Water Supply Project (known by its French acronym, PEMU) was launched several years ago, but does not appear to have had a significant impact. PEMU proposed to increase access to water in urban areas by improving the utility’s technical and financial effectiveness, particularly relating to massive arrears in payments.

The project had a three-pronged focus: “the restoration of financial viability; the creation of conditions for dynamic management which will transform this public enterprise into a social entity designed to increase managerial autonomy; as well as the renewal and upgrading of facilities in the three centres most likely to generate the revenue needed to restore balance and help support secondary centres.”

But two years later, large parts of the capital remain unconnected to the water infrastructure, and those lucky enough to have a water connection in their homes say they are not much better off.

“The water only comes at night,” says Joseph Lubamba, “if you don’t wake up in time, you miss it. And then my family is obliged to get water from elsewhere, and to pay around 100 francs Congolais – the equivalent of a U.S. dollar – for a jerry-can of 20 litres.”

Yet his bill from the utility company remains high. “I have to pay nearly 80,000 francs over ten months, that is 90 dollars. What is there to encourage me to pay so much money for a water supply that I can rarely use?”

Mwaku says even when the water flows just once a week, REGIDESO’s customers still receive large bills, and households which use very little water are asked to pay the same amount as those which draw a store for several days.

“It has become a serious problem for the city,” Franck Kimbembe, director of water distribution for Kinshasa West, told IPS. But he says the problem is linked to work on the “Cinq chantiers de la République” development initiative launched to coincide with the DRC’s 50th anniversary.

The five “chantiers”, or sites for development, cover infrastructure, health and education, housing, unemployment, and – ironically – electricity and water. According to Kimbembe, the city itself is a permanent construction site, with the work constantly in progress, sometimes forcing REGIDESO to suspend or move even the principal arteries of its distribution network.

“What’s more, the repeated interruptions to the power supply are a challenge to our efforts to maintain a consistent service to satisfy the needs of our customers, because our production relies on electricity,” he says.

Jean-Pierre Ntomobolo, responsible for communications at REGIDESO’s Water Projects Implementation Unit, believes that with time, the situation will settle down and improve as various projects are completed.