Oct 6, Oct 6 2011 (IPS) - Emmanuel Joseph and George Amoah, two disabled Ghanaians, occupy different ends of the spectrum. The former lies on a piece of cardboard in Accra Central, his half-naked body twisted and mostly paralysed, the sun beating down on him while he waits to collect three dollars, the average proceeds of a day’s begging. 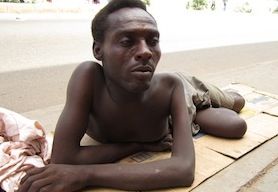 Emmanuel Joseph lies on a piece of cardboard in Accra Central. Paralysed from the waist down, he comes here every morning at 7am to beg. Credit: Paul Carlucci/IPS

The latter sits in a wheelchair and wears a tidy three-piece suit, his hair neatly cut and his eyes alert as he works through another day at a major international bank in the same neighbourhood.

They are just two of the country’s estimated two million disabled, who, according to the World Health Organization, account for seven to 10 percent of the population. Five years after its passage, the Persons with Disability Act has brought few changes to their lives.

On paper its provisions promise plentiful employment opportunities, free education, accessible buildings and transportation, and societal acceptance. The reality is much different.

“Sometimes I get insulted,” says Joseph, who says his legs became paralysed after he received a medicinal injection because he fell sick. “Sometimes people also beat me.”

He lives with his brother in a community called Post Office. Every morning, he wheels himself to Central and lies on the sidewalk. People with similar disabilities are all over the area, some pushing themselves around on pieces of plywood, while others wade into traffic snarls to beg for change.

“There is a very subtle discrimination,” says Amoah. “So far as you are physically challenged, you are categorised in a certain way. I do not know if you should only be begging or weaving or whatever. To a large degree, that’s the mind set of corporate Ghana.”

In some ways, Amoah lucked out. He is university educated, and he was able to find a position at the bank after a non-governmental organisation Sight Savers hosted its first annual job fair in 2010.

He is vague about the origins of his disability, but he says it struck him when he was young, and resulted in his missing five years of school. That he managed to get ahead in a country that often regards disability with superstition or derision is a victory. His disabled friends have not been so lucky.

“Obviously, it is a very difficult challenge,” Amoah says. “They have to depend on family. Some will have to find menial jobs, and a few of them (beg). Most of them do jobs that they are way above, but they have to survive.”

None of the Act’s provisions have been fully realised. A draft legislative instrument, which is supposed to flesh out clauses related to employment, education, penalties, and the built environment, has been stalled somewhere between the Ministry of Social Welfare and the Attorney General’s Office.

This comes as the Ghana Federation of the Disabled (GFD) is trying to leverage its relationship with government to make changes.

“If we do not do that, and the draft legislative instrument is passed as it is, there will be a lot of gaps,” says Isaac Tuggon, an advocate with GFD. “It is something that should have been ready a long time ago.”

According to the Act, Ghana’s built environment should be accessible by 2016. While there are accessible buildings in Accra, the city is still laden with barriers, from open gutters to old buildings with only steep steps and no elevators. Tuggon complains that hardly any work has been done to bring buildings up to code, and that even new structures are lacking ramps and other features.

“The government’s hands are tied because the government itself is not doing what is right,” he says.

In Accra Central, where many of the federal ministries are headquartered, only the Ministry of Social Welfare has wheelchair ramps.

“If I can go anywhere, I am not disabled,” says Amoah alluding to the fact that it is very difficult to get around the city. “Sometimes, it is the environment that is disabling.”

The Act also called for the establishment of a National Council on Persons with Disability. The council has been formed, but its executive secretary, Max Vardon, says it is under resourced and under funded.

One of the council’s tasks has been to pass guidelines for disbursing monies set in municipal, metropolitan, or district Common Funds. The funds were established in the 1990s as Ghana sought to decentralise its federal government.

In 2005, in response to advocacy pressure, two percent of those funds were pledged to persons with disabilities. That money was slow in coming, if it came at all. The guidelines were supposed to fix the problem.

In 2010, the Ministry of Local Government and Rural Development began issuing directives to municipal, metropolitan, and district governments insisting they fall in line with the guidelines, which, among other things, called for a separate account to hold the monies and a committee to determine how they should be disbursed.

Slowly but increasingly, committees are being formed and accounts are being opened. The Accra Metropolitan Assembly (AMA) says it has over 52,000 dollars in an account. According to the AMA’s budget officer, a committee will be fully assembled within a couple weeks.

The AMA also disputes allegations that it had not disbursed money before the imposition of the guidelines. The local government’s budget officer has several documents showing grants for sewing machines and other working tools.

Until the Act’s legislative instrument is passed, there’s no way to penalise people or institutions that contravene its provisions. At the same time, most disability advocates seem to feel change is gradually coming. Some, like Amoah, think it is a slow evolution of corporate Ghana’s mind set. Others, like Vardon, think it is a matter of society reflecting itself in government.

“Over the years,” Vardon says, “this sector has not been as heavily resourced as others, and we reflect the choices we have made as society. If more people made more noise about their cousin, their aunt, their uncle, whatever, who have disability, more people made noise about it, then perhaps government would say, okay, let us make more resources available for that.”