MOGADISHU, Oct 18 2011 (IPS) - When Al-Shabaab militants called the Somali national women’s basketball team captain, Suweys Ali Jama, and told her she had two options: to be killed or to stop playing basketball, she decided that neither was really an option at all. 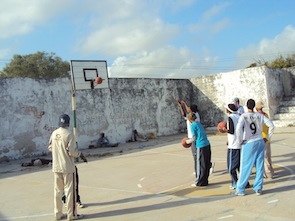 The Somali national women's basketball team is in training for the Arab Games in Qatar. Credit: Shafi'i Mohyaddin Abokar/IPS

“I will only die when my life runs out – no one can kill me but Allah … I will never stop my profession while I am still alive,” Jama told IPS.

“Now, I am a player, but even if I retire I hope to be a coach – I will stop basketball only when I perish,” Jama said.

The Al-Qaeda-linked military group controls large parts of Somalia and occupied almost half of the country’s capital, Mogadishu, until its surprise withdrawal on Aug. 6. However, the group’s presence in the city remains as Al-Shabaab claimed responsibility for an attack on the capital on Oct. 4, which killed at least 70 people.

Now Jama and members of her team have received death threats from the Islamic militant group, which views women’s participation in sport as “un-Islamic”.

In August 2006 the Somali Islamic Courts Union (ICU), a group of Sharia courts, issued an order banning Somali women from playing sport calling it the “heritage of old Christian cultures.” At the time the ICU controlled Mogadishu, but lost control of the city in December 2006.

Al-Shabaab, which was the armed wing of the ICU, has not altered their stance on women playing sport.

“‘You are twice guilty. First, you are a woman and you are playing sports, which the Islamic rule has banned. Second, you are representing the military club who are puppets for the infidels. So we are targeting you wherever you are,’ Islamists warned me during phone calls. But I am still clinging to my profession,” Mohamed told IPS.

Mohamed is one of the prominent national team members who belong to the Somali military sports club, Horseed. Mohamed’s mother is a former member of the women’s national team and she has been playing the sport since she was a child.

Basketball is the second-most popular sport in Somalia after football and, aside from handball, is the only other sport that Somali women play. However, women earn meager salaries as professional basketball players.

“I am a human being and I fear, but I know that only Allah can kill me,” 21-year-old Mohamed said echoing Jama’s sentiments.

So the team is training for December’s Arab Games in Qatar inside the safety of the bullet-ridden walls of the Somali police academy’s basketball court.

On a day with a clear blue sky overhead the women, dressed in loose fitting tracksuits and T-shirts and wearing headscarves, sprint from one end of the court to another amid the presence of hundreds of policemen.

When they are done they line up to take shots at the basketball hoop. All week they train for two hours a day here and only take off on Thursdays and Fridays – the Muslim weekend.

In the evening when the women leave the safety of the training base they swap their training gear for the anonymity of the traditional Islamic dress and veil. They also wear a Yashmak, a small piece of cloth to cover their faces.

Somalia’s first women’s national basketball team was formed in 1970 and participated in African and regional competitions over the years despite never winning a tournament, according to the National Olympic Committee President Aden Hajji Yeberow.

“The Islamist ban led to some women (quitting the sport), because of fear,” Ahmed told IPS.

President of the Somali Basketball Federation Hussein Ibrahim Ali said that whenever women’s involvement in basketball grows, something occurs to set the sport back.

The 2006 Islamist ban, which lead to nearly two hundred women quitting the sport because of fear of reprisals, was one such incident. The two decades of civil war in the country, was another. Since mid- July a severe drought has affected the country, with famine declared in regions of southern Somalia.

Ali added that lack of sponsorship and insecurity were the biggest killers of sport in Somalia.

“So when the world knows that Somalia has undergone such hardships and our women are playing in an international tournament, this would really be great publicity for the whole country and, in particular, for the basketball federation,” Ali said.

The women’s coach Ali Sheik Muktar said that he is hopeful that his team will be successful in the upcoming Arab Games.

“To have a women’s team means a lot to Somalia,” Ali said.