SOMALIA: Rape – The Hidden Side of the Famine Crisis

DADAAB, Kenya, Oct 5 2011 (IPS) - When Aisha Diis* and her five children fled their home in Somalia seeking aid from the famine devastating the region, she could not have known the dangers of the journey, or even fathom that she would be raped along the way. 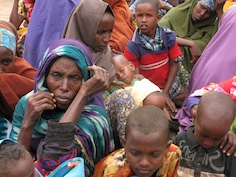 New arrivals at Dadaab wait for a medical check up. Credit: Isaiah Esipisu/IPS

Diis left her village of Kismayu, southwest of the Somali capital of Mogadishu, for the Dadaab refugee camp in Kenya’s North Eastern Province in April.

“I was in a group of many women and children, but four of us had come from the same village, hence, we related (to each other) as one family. Along the way, we stopped to make some strong tea since the children were feeling very tired and hungry. One woman remained behind with the children and the three of us went to search for firewood,” Diis told IPS through a translator.

“We were ambushed by a group of five men who stripped us naked and raped us repeatedly,” she said as tears rolled down her cheeks. “It is something I have not been able to forget. But I wouldn’t like my children to know about it.”

But the trauma Diis and the other two women had to undergo is not an isolated incident.

As hundreds of tired, weak and malnourished women and children stream into Dadaab from famine-hit Somalia daily, the journey, for many of the women, would have been a harrowing one.

Tired and dusty, most women carry their babies tied to their backs. For many this precious cargo is the only possession they have managed to save from their homes in Somalia. Some, however, are slightly more fortunate and come with their children and what few belongings they have packed onto donkey carts.

They rarely talk about what has happened to them on the way here, when they arrive.

Instead, most register as refugees and undergo medical screening with their children. Then they are allocated a tent and basic household equipment.

The tents have no lockable doors, no windows, and no furniture, not even a bed. But all the same this is a place that the refugees can call home – for now, and perhaps for many years to come. (Some of the refugees were born here in 1991 when the camp was first established, and have not known any other home.)

But even after the women have settled in, many do not come forward to speak about the violence they experienced on their way to the camp.

“As per the rapid assessment done on GBV in Dadaab released by the IRC in July, rape and sexual violence were mentioned as the most pressing concerns for women and girls while fleeing Somalia and as an ongoing, though lesser concern, in the camps,” Murray told IPS.

“Some women interviewed during (the IRC) survey said they witnessed women and girls being raped in front of their husbands and parents, at the insistence of perpetrators described as ‘men with guns.’ Others were forced to strip down naked, and in the event they were raped by multiple perpetrators,” said Murray.

But Diis, and the two women who were raped with her, are some of the few Somali women who reported the violence they have been subjected to on their journey to Dadaab. In Diis’ case, she was brave enough to do so because she is a widow, and does not fear recrimination from her family as other women do.

“I did not fear to disclose my case to the medical officer because I did not have a husband,” said the widow whose husband was gunned down in Somalia by unknown assailants seven months ago.

“Many women are assaulted on their way to the refugee camp by unknown armed men, especially when travelling in a group without men,” said Ann Burton, a senior public health officer at the United Nations Refugee Agency (UNHCR) at Dadaab.

“However, most of them are reluctant to report such cases since they fear that their families will blame them, communities will reject them or simply because they feel ashamed to talk about it.”

Diis was given post exposure prophylaxis, a short-term antiretroviral treatment used to reduce the likelihood of HIV infection, after she reported her rape.

“After I reported my case I was given some medicine, and I was monitored for three months after which I was informed that I had not contracted HIV. That was one of my biggest concerns,” said Diis. She also received counselling.

The other two women who were raped with Diis were also counselled and received post exposure prophylaxis.

Diis said that she is aware of other women who were raped before their immediate family members and did not report it to the medical staff at the camp.

Not reporting the rape just adds to the suffering of the women. Burton said: “Survivors often do not get critical life-saving care because of keeping it a secret.”

So far, only 30 cases of rape were reported between January and July 2011 according to the UNHCR at Dadaab. But medical experts at the camp say that this is a small fraction of a huge problem faced by women.

Once they arrive at Dadaab some women continue to experience gender-based violence from their intimate partners. Murray said this includes early marriages and survival sex – where women are forced to exchange sex for access to basic needs.

Though such GBV incidents are said to be less frequent within the camps, some women told IPS that they feel insecure and scared at night while sleeping in the makeshift shelters.

“The camps do not have fences and at the same time we are not able to lock our shelters throughout the night. Anything can happen in the dark hours,” said Amina Muhammad who lives in Dadaab.

The biggest risk at the camp, according to the women IPS spoke to, is when they travel long distances in search of firewood.