KAMPALA, Nov 11 2011 (IPS) - Simret Mebrahtu has been an infrequent visitor to the National Library of Uganda in the centre of Kampala for nearly two years. A student, she stops by every couple of weeks to use the cheap internet connection if one of the few computers is available. 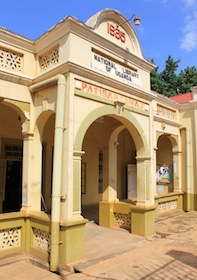 When they are full, though, she said there is not much to do except dip into an Encyclopedia and wait for someone to finish. There are few other books at the library she finds interesting enough to read, she said.

Like a majority of Uganda’s library users who participated in a new EIFL perception study, Mebrahtu is supportive of her local library and encourages her friends to visit. But she also echoes a larger concern that the country’s libraries do not have the necessary infrastructure, technology and basic resources to attract new visitors and keep them coming back regularly.

EIFL – an international non-profit organisation that works with libraries around the world to encourage access to digital information – conducted the surveys in Ethiopia, Ghana, Kenya, Tanzania, Uganda and Zimbabwe.

Monika Elbert, a senior policy advisor for the group, said they had realised the countries’ libraries “were seriously under-resourced and there was very little political support for them. Rather than develop ideas and untargeted actions,” though, EIFL decided to survey key stakeholders to learn how the library systems could be improved, she said in an interview with IPS.

Elbert and other members of the organisation presented their findings in a workshop in Kampala on Thursday.

The most interesting finding, said Ugne Lipeikaite, the impact manager for EIFL’s Public Library Innovation Programme, was the “gap between the opinion of (library) users about what the library is for and the expectation among non-users.”

Additionally, the study found that a significant minority of non-users expected to find information on health and agriculture issues, which is not always available in Uganda’s libraries.

Lipeikaite said this could be a big challenge in trying to grow the country’s library visitors. In the workshop, the participants “were all saying that one of the areas where they should work more is to attract non-users. But then, you must know their expectations. If they want to get health information, if they want to get agriculture information, then libraries should think if they are providing this service.”

Elbert said another key challenge is a lack of infrastructure – both physically and technologically. The space issue is obvious at the National Library of Uganda, where Joshua Fredrick Okongo has been coming to study for his secondary school exams.

He was encouraged to visit the library by his friends, who had told him it was a quiet place to study. When he arrived, he said “people were packed together” and he had to ask the librarian where he was supposed to sit.

Regardless, he plans to keep coming back until his exams are finished, because it is a “nice place” where he is able to concentrate.

But because libraries are now expected to be much more than quiet places to study or check out a book, Elbert said that if Uganda is going to expand the physical space of its libraries, policy makers should also look to improve their technological capacity.

“Public libraries are going through a revival in other countries, because the need for them in the digital age is obvious in so many ways,” she said. And libraries in Uganda have the potential to be vital employment and training centres for their communities.

For instance, EIPL is supporting a project that will connect the national library to two regional libraries: one in Lira, which is in northern Uganda, and one in Masindi, a town in the west.

The project will recruit unemployed youth, who will be able to use computer facilities to upgrade their CVs and learn basic skills. They will also be connected to a job database maintained by the national library that will send out text messages when a position is available or when there are education and training opportunities.

“Hopefully by the end of that project we will have many people who have been able to find a job,” Elbert said.

And in order for all of this to happen, librarians will have to take on an additional role – as activists. While the EIFL survey found almost universal support for more funding for libraries across all categories of stakeholders – users, non-users, librarians and local and national politicians – the money is still not there.

Librarians and their supporters will have to more actively engage local and national politicians to get more money and to demand technological upgrades.

She said at their workshop EIFL was able to identify a group of motivated library supporters who were eager to lobby local and national officials. And there is clearly broad-based national support for the library system that promoters can harness. All of the groups that EIFL surveyed agreed that libraries were essential – both on an individual and community level.

“I would say that actually the most exciting and interesting (finding) was the very, very positive attitude toward public libraries,” Elbert said. “We hadn’t expected that. There they are, kind of run-down places, and then everybody thinks they are basically great. And we want them to be greater.”