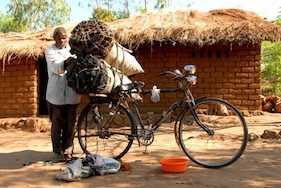 BLANTYRE, Nov 28 2011 (IPS) - As Daniel Chakunkha and Mussa Abu talk on the side of a dirt path in Makunje village, Malawi, a steady stream of bicycles loaded with charcoal passes by. The men stand at the halfway mark between Mwanza, a small city in the country’s southwest, and Blantyre, Malawi’s commercial hub.

The 50-kilometre-long road joining the two is a figurative energy highway; a constant stream of bicycles heavily laden with oversized bags of charcoal.

“We are forced to walk this distance,” Chakunkha said. “It’s not like we chose to go to (Mwanza) village, but it is the only place where some trees are left.” Informal charcoal makers like Chakunkha and Abu travel to Mwanza because of the easy availability of trees here. Here they use the trees to produce charcoal and then transport it back to Blantyre for sale.

Chakunkha and Abu have both worked as charcoal producers since the 1970s. They recounted how the industry has steadily consumed trees and pushed production sites further away from densely-populated urban areas.

Resource depletion and environmental degradation are serious problems in Malawi. This sub-Saharan nation is geographically small and relies heavily on natural resources to meet demands for both food and energy.

It is the fifth most-densely populated country in Africa, 80 percent of its 14.9 million people rely on subsistence agriculture, and 85 percent of households surveyed by the International Institute for Environment and Development (IIED) in 2007 reported using charcoal for cooking.

The two big ones are deforestation and rapid agricultural expansion, he explained.

It is not something Malawians are unaware of. “We are well aware of the effects of deforestation on the environment but we are forced by circumstances,” Abu lamented.

“Yes, we are feeling the effect of these self-inflicted injuries,” Makunje interrupted. “When we had enough vegetative cover, the soil was very fertile and strong because of the leaves and roots. Nowadays, our farmland has become useless.”

Citing government figures, Mmangisa said that each year Malawi loses 2.6 percent of its forests and between 10 to 57 tonnes of soil per hectare across the entire country.

“There is a need to have well-detailed and enforced legislation in the management of the environment,” Mmangisa said.

His concerns were echoed by Bright Sibale, executive director for the Centre for Development Management, a research organisation that works with forestry stakeholders in Malawi.

“Charcoal production in Malawi is done inefficiently using traditional methods and tools that lead to large areas of land being felled to produce a limited amount of charcoal,” Sibale explained. “Deforestation increases the rate of soil erosion, which causes siltation of major water systems.”

One possible solution, he suggested, is the adoption of “community-managed forests.”

Sibale described the scheme as a “mechanism of empowering local communities to own and manage a forest under an agreement with some authority.”

He noted that most forest areas in Malawi are either publicly or customarily managed, which deprives communities of formal rights to access resources. “The end result is the feeling that each community would like to extract their piece, before the next person does so.”

There are also laws aimed at governing the country’s formal and informal charcoal industry which, according to an IIED report, employs upwards of 93,000 people.

However, there are complications with this. Section 81.1 of the Forestry Act states that charcoal can only be produced with a license issued by the Forestry Department. But, according to several stakeholders interviewed, the government has not issued licenses in years.

Furthermore, according to another IIED report: “The complexity of writing a forestry management plan, and the lack of clarity over who has the right and responsibility to produce (charcoal), has effectively criminalised all charcoal producers.”

Malawi’s Director of Environmental Affairs, Yanira Ntupanyama, maintained that efforts are being made to lessen the country’s reliance on charcoal. She said that biogas is being introduced as an alternative to charcoal, and that government is promoting income-generating activities that will hopefully act as incentives for people to leave the charcoal industry.

As governments and world experts meet in Durban, South Africa on Monday at the 17th Conference of the Parties to the United Nations Framework Convention on Climate Change, Ntupanyama went on to draw attention to the world’s changing climate, which has compounded Malawi’s problem of environmental degradation.

“Malawi’s total emissions (averaging 23,487 gigatonnes annually) are insignificant at the global level,” she noted. “Yet we do suffer from the consequential adverse effects of climate change that include intense rainfall, floods, droughts, dry spells, cold spells, strong winds, thunderstorms, landslides, hailstorms, mudslides and heat waves, among others.”

Ntupanyama described climate change as a direct threat to the country’s socio-economic development, and therefore a government priority. “We have set ambitious goals under the Green Belt Initiative,” she boasted.

Yet if Malawi’s illegal but booming charcoal industry is any indication, there is much work to be done. Furthermore, while deforestation and soil erosion may be the country’s most pressing concerns today, it is possible there are even greater threats on the horizon.

Lake Malawi plays home to more species of fish than any other freshwater body on the planet. It also provides a livelihood for tens of thousands of fishermen, and acts as a major tourist attraction. Yet in October, UK-based Surestream Petroleum was awared a license for oil exploration in the lake.

The possibility of oilrigs on one of Africa’s most celebrated natural resources has inevitably attracted the ire of environmentalists. But proponents of the project contend that Malawi is an impoverished nation in dire need of external revenue.

That argument that was echoed by charcoal producers in Makunje village.

“We feel the effects of deforestation,” Chakunkha said. “If you ask any charcoal producer, no one will try to justify it. We are only doing this out of desperation.”