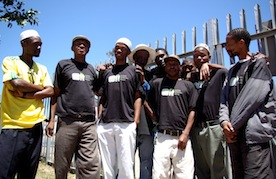 CAPE TOWN, Dec 1 2011 (IPS) - Although at first glance male circumcision may not be the most obvious entrée to get people talking about gender equality, activists in the Western Cape in South Africa are attempting to do just that. This comes as South Africa takes part in the global 16 Days of Activism for “No Violence Against Women and Children” campaign, which runs from Nov. 25 to Dec. 10.

As part of a national strategy to reduce the number of new HIV infections in South Africa, where some 10 percent of the population is HIV positive, the Western Cape province began offering free medical male circumcision (MMC) in selected public clinics across the province this October.

Studies have shown that men who have undergone MMC, which results in the complete removal of the foreskin, are 60 percent less likely to contract HIV when engaging in heterosexual intercourse with an HIV-positive partner.

As such, the World Health Organization and the Joint United Nations Programme on HIV/AIDS both advocate MMC as an important strategy in the prevention of HIV infection in areas where HIV is transmitted primarily via heterosexual intercourse and where there is a high prevalence of HIV along with a low prevalence of MMC.

Activists at the Sonke Gender Justice Network, a non-profit organisation focusing on men’s responsibilities in creating a just and democratic society, see MMC as carrying benefits in addition to its significant HIV-prevention potential. They see it as nothingless than an opportunity to promote gender equality.

The first phase of the effort to use MMC as a platform to promote gender equality has come in the form of raising awareness. Through posters, brochures, and a door-to-door campaign, Sonke is focusing on educating people not only about the health benefits of MMC, but also on the importance of women’s participation in conversations around MMC and sexual decision-making in general.

Two weeks ago about 30 Sonke volunteers visited some 200 households in Gugulethu, a township 15 kilometres outside of Cape Town. The door-to-door campaign was carried out in the week preceding the Saturday that the local clinic was offering free MMC (so far MMC is only available in a few clinics on specific dates).

“I was very, very nervous,” volunteer Bongani Nhlapho said about his part in the campaign.

“We grew up in the community and we’ve been circumcised – not with MMC but through traditional circumcision in the bush. So when we came with this new thing, I worried they would say, ‘How can you go to the bush and now come telling us this? What about our children? Are you saying we must stop sending them to the bush?'”

South Africa’s diverse population includes several groups that practice circumcision as a rite of passage, in the case of the Western Cape, that primarily means the Muslim and Xhosa communities. However, traditional circumcision does not always remove the entire foreskin, and so does not necessarily carry the same medical benefits as MMC in terms of HIV and other STD prevention.

According to Sonke, many of the South African men who self report that they are circumcised say that the foreskin is only partially removed.

Himself a Xhosa man who was traditionally circumcised, Nhlapho found that raising the topic of MMC to the largely Xhosa population in Gugulethu was not as controversial as he had feared in terms of the issue of traditional versus medical circumcision. As it turned out, speaking about circumcision with women was the greater cultural challenge.

“Women were asking me, ‘Why are you telling us this? We’re not supposed to know these things,'” Nhlapho said, explaining that according to Xhosa tradition, women should have nothing to do with matters of circumcision.

Nhlapho was not alone. Volunteer Yusuf Williams said that though he faced a similar reaction from some of the Xhosa women he spoke with, he went on to explain to them that they should listen for the sake of their own and their partner’s health.

“I told them you have to have understanding of MMC because if your partner does it, you must stand by his side. For example, if he does this, you can’t have intercourse for six weeks,” Williams said.

Sonke volunteers stress that issues like intercourse before the six-week healing period following MMC (which can actually increase the likelihood of HIV-infection), and the necessity of continuing to use condoms after MMC are better tackled when both partners are educated.

Though reactions to the campaign were mixed, Leo Mbobi was not discouraged, saying that well over half of those contacted responded positively, and emphasising the importance of getting the conversations started.

“There are issues of inequality in South Africa, especially on who decides when to have sex, whom to have sex with, and how to have sex. These health-related decisions are still mostly on men’s authority and men’s power. To bring a gender dimension to the issue of MMC means encouraging men to do couples testing before MMC, making sure that they come to the procedure with their partners so their partners can support them during the healing period, and opening up discussion around these matters,” said Mbobi. The provincial Department of Health says it hopes to have conducted over 19,000 MMCs by the end of March 2012. Meanwhile, Sonke’s awareness campaign is set to grow with the introduction in the coming months of comic strips, murals, and taxis painted with messages about the benefits and facts around MMC.

Nhlapho thinks that the campaign will bring change.

“First people didn’t want to listen when we talked about HIV/AIDS. But now around the communities every day we lose someone from HIV, so now people are listening. At the end of the day I’m leaving you with the right information, so if you know that you are in danger of that thing, you can do something about it.”