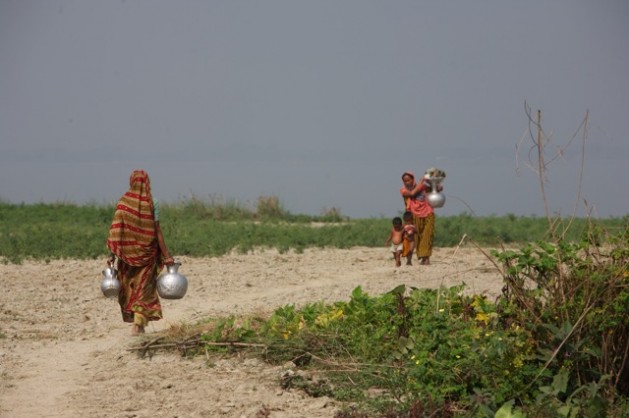 DAKHA, May 21 2012 (IPS) - Experts believe that the upcoming United Nations Earth Summit, Rio+ 20, scheduled to take place in Brazil from Jun.20-22, could be a real opportunity for Bangladesh to negotiate a road to sustainable development.

The conference on sustainable development, which depends largely on states coming to a consensus on an effective transition to a green economy, requires significant investment in renewable energy, the efficient use of natural resources, research and innovative technologies.

As a nation Bangladesh is one of the worst victims of climate change. The country’s move towards sustainability requires huge financial support to overcome the damages it continues to suffer from global warming.

Bangladesh has both the will and leadership to initiate dialogue for action but its biggest challenge at the conference will be to force leaders of the wealthy nations to recognise its potential.

In conversations with IPS, politicians, policy makers, economists and environmental activists said that Bangladesh has a strong hand to show at the Rio+20 negotiating table.

When the summit was born 20 years ago Bangladesh was only just beginning to implement certain vital programmes in reducing poverty and child and maternal mortality; ensuring food security; closing the gender inequality gaps in primary and secondary education; increasing immunisation coverage for under- five-year-olds; implementing disaster preparedness; generating access to safer drinking water and undertaking many other projects necessary to achieving the Millennium Development Goals (MDGs).

Twenty years ago Bangladesh was not politically or economically mature enough to set the agenda in international fora. But now, after two decades of being a leader among the least developed countries (LDCs), Bangladesh has a firmer foot to stand on.

Bangladesh State Minister for Environment & Forests, Hasan Mahmud, told IPS, “(Despite) being an LDC, Bangladesh is still in a good position in terms of achieving some of the MDGs.”

But the minister expressed concern about rising global population. “More population means more industries and more carbon emissions. If we can take this opportunity to (link) the population issue with the main theme of the Rio Summit, I believe we will have found a solution to many problems.”

The eminent economist Abul Barakat told IPS, “Bangladesh should take an approach that blends political and economic diplomacy.” He said that though the issues on the table at Rio were largely economic and environmental, the solution will have to be political.

Barakat, who has been published in numerous international publications during his 30-year-long teaching career, said, “In the ‘gain game’ at the Rio platform Bangladesh could emerge as the key negotiator for LDCs demanding compensation for damages (caused) by carbon emission. In fact, Bangladesh should change its strategy from demanding mitigation and adaptation technologies to directly asking for compensation from the wealthier nations.”

Fahmida Khatun, a leading policy maker and head of the research wing of the Bangladeshi think tank Centre for Policy Dialogue (CPD) told IPS, “The Rio Conference is undoubtedly an opportunity for Bangladesh to gain financially as well as technologically. In order to face the realities of climate change Bangladesh has a right to demand compensation for mega-disasters like recurring floods, sea level rise, salinity, drought and similar natural disasters.”

Khatun added that the Rio platform could also be an opportunity for the country to share knowledge of how it managed to build from the rubble of mega-disasters like cyclones Sidr (2007) and Aila (2009).

She recalled that during the cyclone of April 29, 1991, one of the deadliest on record, over one million people were killed.

Having learnt valuable lessons on natural disaster mitigation, Bangladesh managed to limit the death toll during cyclones Sidr and Aila, which were similar in intensity, to only a few thousand, she said, a feat that many global leaders can learn from.

The country’s extraordinary achievements in poverty reduction and disaster management, not to mention a steady increase in foreign remittances and growth in exports of ready-made garments (amounting to 17 billion dollars in the last financial year) give it legitimacy to take a leading role at Rio+20.

Particularly, experts says, since these milestones were achieved despite repeated political turmoil and slow or very poor economic growth.

Bangladesh is now a ‘doer’ and should no longer be considered a ‘borrower’ from the rich nations; the Earth Summit is an excellent opportunity for the country to proudly play the ‘gain game’.

Chairman of the Palli Karma-Sahayak Foundation (PKSF), Qazi Kholiquzzaman Ahmad, who is expected to lead Bangladesh’s delegation at the conference, told IPS, “All sustainable development has to be human centred and we need financial, research and technological support. We need a sound partnership but very sadly our partners are not giving what they pledged in the past.”

Ahmad, who is worried by wealthy nation’s failure to disburse funds, said, “Of the 30 billion dollars committed by the wealthy nations for climate vulnerable countries, little over 3.5 billion dollars was actually released in two years. This time we must not miss the opportunity to demand what we need.”

Atiq Rahman, executive director of the Bangladesh Centre for Advanced Studies (BCAS), a policy, research, and implementation institute working on sustainable development, told IPS, “Of course, we have to grab opportunities for transition to the ‘green economy.’”

This Rio Summit could be the foundation from which Bangladesh prepares for a leading role in future international conferences, where more focused and face to face negotiations could take place, he added.

U.N. Resident Coordinator in Bangladesh, Neal Grant Walker, congratulated the country on its proactive stance in the preparatory process for the Rio Summit.

Walker told IPS, “Bangladesh is moving fast from an LCD to middle income status. There is no doubt Bangladesh has a direct and important stake in the outcome of the Rio Summit and in the follow-up process leading to the next development paradigm.”