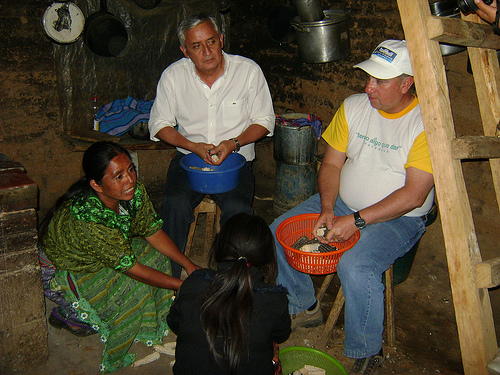 GUATEMALA CITY, May 2 2012 (IPS) - “It’s very hard for them to put food on the table, but they are very noble people,” Diego Orozco, one of the thousands of young urban Guatemalans who spent last weekend with a poor rural family, told IPS.

“They only ate a plate of beans, but they gave me the privilege of also giving me an egg and some boiled water,” added the 18-year-old, who comes from a middle-class family.

“The most significant thing was that I realised the importance of water. They get water every four days, and it’s really hard for them to be able to take baths and have drinking water. If they don’t have water they can’t irrigate their crops, and without crops, they don’t have food,” he said, after spending Saturday Apr. 28 and Sunday Apr. 29 with campesinos or peasant farmers in the western department (province) of Quetzaltenango.

Like Orozco, more than 6,000 middle- and upper-middle-class young people, mainly from the capital, visited 14 of the country’s 22 departments to stay with poor rural families and get an up-close view of the poverty and malnutrition they face.

The president, right-wing retired General Otto Pérez Molina, and cabinet ministers and other public officials also participated in the activity.

The initiative, “Todos tenemos algo que dar” (We All Have Something to Give), brings the private sector and the government’s Secretariat for Food and Nutritional Security together to raise awareness among young people about poverty and malnutrition, and get them to take part in the search for solutions.

In Guatemala, which has the highest chronic malnutrition rates in Latin America, one out of two children under five is undernourished, according to the United Nations Children’s Fund, UNICEF.

And a full 54 percent of the country’s 14 million people live in poverty, while 13 percent – mainly indigenous people – live in extreme poverty, according to the government’s 2011 National Survey on Living Conditions.

“We waste water and we don’t value what our parents give us,” Orozco said. “We are all human and we should all have the same, not some less and others more. There are people who work very hard, and who have a really hard time trying to get ahead, and others who don’t have to struggle at all.”

The visitors stayed overnight in the public schools closest to the communities they visited, ate their meals with campesino families, took part in their daily work activities, and exchanged opinions about their lives.

Juan Carlos Girón, an 18-year-old private school student, spent the weekend with a family in Vixbén, a mainly indigenous community in Quetzaltenango in Guatemala’s western highlands.

“I visited a couple with nine kids,” he told IPS. “They’re poor, but very noble. They have a small woodstove, a few plates, a sheet metal roof with holes, and a dirt floor.

“The father told me that last week his children didn’t have anything to eat, because the family had no money. But they welcomed me with a special meal (sheep liver) that they used all their savings to buy, when they usually eat just corn tamales with coffee or water,” he added.

“I felt embarrassed and sad because I know that so many people in the world don’t appreciate or take advantage of what they have,” he said.

Girón helped the family wash the dishes and wash clothes, cut firewood, and take the sheep out to pasture.

He noticed that one of the youngest children “was five years old, but was the size of a three-year-old, and she was really skinny. They said they ate well, but you could see how things really were.”

He said that he realised he can’t complain about his own life.

Guatemala is considered one of the most unequal countries in the world. Nearly 80 percent of the country’s farmland is owned by just five percent of the population, according to the United Nations Development Programme (UNDP).

The organisers of “Tengo algo que dar” were pleased with the results.

“It was very positive and special, an encounter between human beings with the same vision, the search for joint solutions between two realities: urban Guatemala and rural Guatemala,” Luis Enrique Monterroso, the head of the Secretariat for Food and Nutritional Security, told IPS.

But the initiative, which forms part of the government’s “Zero Hunger” plan to combat malnutrition, doesn’t end there.

The official explained that in May they would hold an exhibition on food solutions, where different experiences will be shared, and in June, a national “coperacha” or collection will be held, to provide tools for farmers and launch projects to attack malnutrition.

“And in July, we’ll go back to the communities, with a proposal for individual or collective solutions,” he said.

Businessman Emilio Méndez, one of the organisers, said that “until we manage to join forces, the problem of malnutrition won’t be solved. It will continue to grow bigger and bigger, and will lash back at us.”

Meanwhile, a seed of hope was planted in the communities visited by the officials and young people.

“I thought it was good they came, because the kids came from somewhere else to see the work we do every day,” Delvi Pérez, an 18-year-old farmer, told IPS.

His family, who live in the community of Huitán, often find it hard to feed themselves. “The truth is that we don’t have enough. We plant 11 to 15 cuerdas (between four and six hectares) a year in basic grains and vegetables, but since there are 11 of us, we have to lease land elsewhere,” he said.

“I think they’re going to do something for us. I’m not sure, but they could help with fertiliser for our land, so we could improve production,” he added.