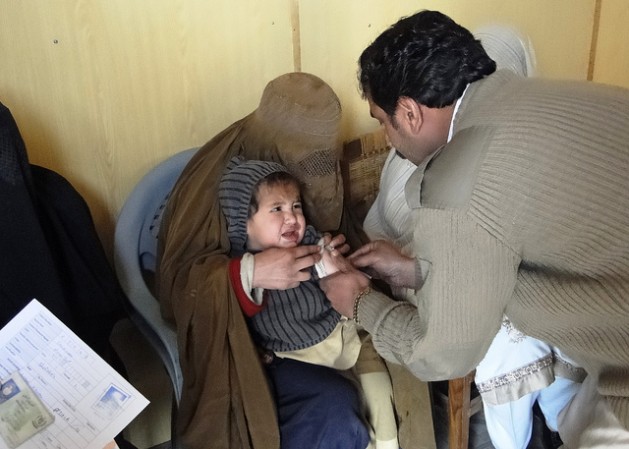 PESHAWAR, May 22 2012 (IPS) - The deaths of 20 children in an outbreak of measles in Pakistan’s Federally Administered Tribal Agency (FATA) are raising concerns over the state of immunisation in the conflict-ridden areas along the Afghanistan border.

“Over the past month, at least 20 children have died of measles in North and South Waziristan because they couldn’t be immunised due to the raging militancy,” said Sahibzada Khalid, deputy director of the expanded programme of immunisation (EPI) in the FATA.

North and South Waziristan are part of seven tribal agencies that make up the FATA that has become a stronghold for Taliban militants spilling over the border from Afghanistan. The FATA has a population of 3.3 million people, most of them from various Pashtun tribes.

The measles outbreak that affected at least 2,345 children in the FATA came as no surprise since the rate of routine child immunisation in the territory is estimated to be only 30 percent – far lower than the 47 percent national average.

Khalid told IPS that the continued conflict in the border areas, where the Pakistan army is fighting Taliban militants, has seriously disrupted the immunisation programme, putting children at risk of contracting several vaccine-preventable diseases.

The FATA recorded 125 cases of polio in the 2010-2011 period while this year there have already been seven cases, making it a major focal point for the crippling paediatric disease in the world.

Pakistan and Afghanistan are among three countries where polio still exists as an epidemic. Nigeria is the third country.

“Half of the polio-affected children in the FATA had failed to receive oral polio vaccine due to inaccessibility and in some cases the parents refused to have their children administered vaccines,” Khalid said.

“Pakistan is required to enhance its immunisation rate to 75 percent by 2015 to fulfill United Nations millennium development goals relating to childhood mortality and combating diseases,” said Obaidullah Khan, a leader of the Pakistan Pediatrics Association (PPA).

Cases of measles have also surfaced in the Khyber Pakhtunkhwa (KP) province that falls adjacent to the FATA.

“Using medicines imported from India we managed to save many measles-affected children who were rushed to hospitals in time,” Khan told IPS. “Infected children can be saved if they are brought in within 24 hours of symptoms showing.”

Measles is a highly contagious viral disease and, according to the World Health Organisation, 95 percent of cases occur in developing countries having poor public health infrastructure.

The PPA has been urging the government to take special measures to make vaccination acceptable in the FATA and KP. “In these areas many people believe that the vaccination programme was being promoted by the United States to make their children infertile.”

Both the FATA and KP have been under fire from U.S. army drones as part of a programme to flush out Taliban militants who are believed to have set up bases in the region to continue their war against North Atlantic Treaty Organisation troops in Afghanistan.

Jan Baz Afridi, an official who leads EPI in KP, said apart from unsettled conditions caused by militancy, the poor record of the vaccination programme was also due to lack of awareness. “Parents pleaded ignorance of the significance of vaccination in 740 cases of measles recorded in April.”

While KP and FATA have about 5.5 million children of immunisable age, most are beyond the reach of the EPI due to inaccessibility, poor infrastructure and the disturbed conditions.

Khalid said measles vaccine doses have now been rushed to North Waziristan where the outbreak is assuming epidemic proportions.

“We are making announcements from mosque loudspeakers encouraging people to get their children immunised. We have requested the support of local prayer leaders because the majority of the people here believe that vaccines were against Islam,” he told IPS.

The government has also started a vaccination programme in the Jalozai refugee camp, 35 km southeast of Peshawar, where more than 55,000 people fleeing military operations in the FATA are being housed.

“Children in many parts of the Khyber Agency have not been vaccinated since October 2009,” he said.

Children from the FATA lodged in the Jalozai camp and numbering 15,000 are luckier since they have been brought under immunisation cover. “In this respect, military action has come as a blessing in disguise for the children of the FATA,” Khalid said.

Sanitary conditions in the camp are another matter. “We are giving hygiene lessons to the inmates to prevent disease outbreaks. We are asking them to drink only boiled water and wash their hands before and after meals,” said Muhibullah Afridi, a doctor attached to the camp.

Afridi said a short-interval additional vaccination dose programme has been started in the camp for extra protection.