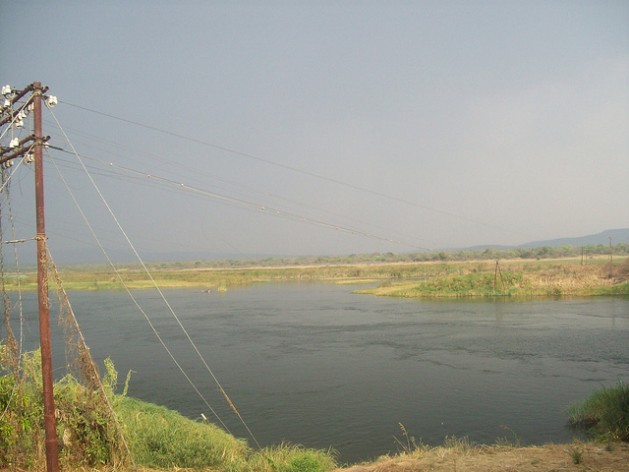 The Luapula River is the only source of drinking water for the people in Nkonde village. Credit: Lewis Mwanangombe/IPS

LUSAKA, Jun 7 2012 (IPS) - Bupe Bana-Victor has lived in the Mwense district of Luapula Province in northern Zambia all her life. And for her, water talk is synonymous with the Luapula River, which lies just 20 metres from her village and snakes through the entire region before it joins the Lualaba River – a tributary of the mighty Congo, Africa’s second-largest river.

In the 45-year-old’s treasure of knowledge lies information about the finicky nature of this river. She knows that in the lean, dry months from May to October it shrinks to a mere ribbon.

But when the heavy rains fall in November, the river recovers dramatically and swells to the fatness of a well-fed python. In November, it overflows its banks and spills onto the doorways of the houses in Nkonde village, where Bana-Victor lives.

It is a time when the women of the village can draw the river’s dirty water by literally opening their doors.

But using the river as a household water supply is not a choice for those who live here. It is their only option because Nkonde village, like most of rural Zambia, does not have access to potable water.

However, drinking river water is not a safe practice. Indeed, the Luapula River is fraught with danger and disease and is infested with black flies, which harbour a parasite known as nematode or roundworm. When these parasites are transmitted to a human they cause River Blindness.

The Luapula River is also home to snails that cause Bilharzia, a tropical disease that causes one’s skin to itch. Other symptoms include diarrhoea, fever, vomiting and blood in the urine.

As a mother and grandmother, Bana-Victor knows all about these dangers. But she had hoped that after the Patriotic Front (PF) was elected to government in September 2011 her village would soon be given access to clean drinking water.

In the election campaign, President Michael Sata’s PF had promised to provide hand pumps and community latrines to those who lacked them. The party also promised that within 90 days of the new government’s taking office, people in rural areas would have access to safe drinking water.

But now, almost nine months later, Bana-Victor wonders if the commitment to change the lives of those living in rural Zambia will ever materialise.

However, Professor Nkandu Luo, minister of local government, early education and environment protection, is optimistic that her government will still turn its promises into a reality.

“Inadequate access to clean water and basic sanitation must be effectively addressed if Zambia is to improve the lives of its people,” she said.

Luo told IPS that the government has earmarked 360 million dollars that will be used to provide improved sources of water and sanitation in both urban and rural areas for five million people over the next three years. The government hopes to completely eradicate the use of scoop holes (shallow wells dug in the ground), springs, rivers, streams and lakes as supplies of drinking water.

Twenty-four million dollars will be allocated to Luapula and Northern Provinces under the National Rural Water Supply and Sanitation Programme, which provides clean water and sanitation to rural areas.

Victor Muyeba, socio-economist for the Devolution Trust Fund, a financing institution that receives funding from the government to facilitate the implementation of sustainable water and sanitation supply services, believes that Zambian women deserve help.
“You cannot have food security without having clean and safe water. Unsafe water affects the health of the people. It deprives women and girls, who provide clean water to their households, of time and energy which they could use to improve food security,” Muyeba said.

But it appears that the new government is serious about providing access to clean water for all. In the government’s 2012 fiscal budget, it allocated about 30 million dollars for the provision of clean water and sanitation.

“About 30 million dollars has been provided as government’s contribution to the water and sanitation sector, representing an increase of 26.1 percent from the 2011 provision (by the previous administration). The funds will be used to improve access to clean and safe drinking water in rural and peri-urban areas,” Finance and National Planning Minister Alexander Chikwanda told parliament when he unveiled his national budget in November 2011.

Meanwhile, Bana-Victor will continue to draw drinking water from the Luapula River.