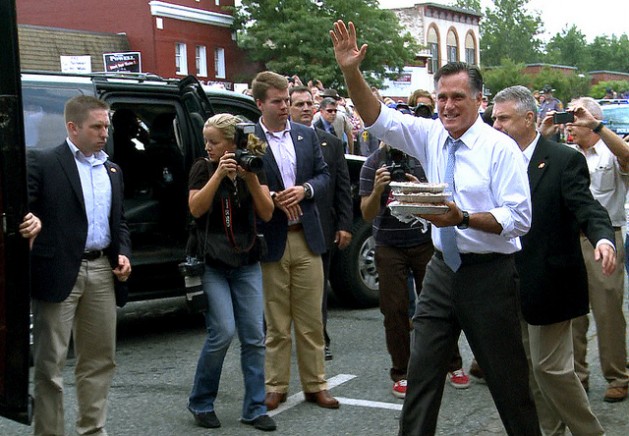 WASHINGTON, Oct 8 2012 (IPS) - In what was billed as a major foreign policy address, Republican presidential candidate Mitt Romney Monday assailed Barack Obama for “passivity” in the conduct of U.S. foreign policy, arguing that it was “time to change course” in the Middle East, in particular.

Dispensing with some of the neo-conservative rhetoric he has used in the past, he nonetheless argued that the “risk of conflict in the region is higher now than when (Obama) took office” and that Washington should tie itself ever more closely to Israel.

“I will re-affirm our historic ties to Israel and our abiding commitment to its security – the world must never see any daylight between our two nations,” he told cadets at the Virginia Military Institute, adding that Washington must “also make clear to Iran through actions – not just words – that their (sic) nuclear pursuit will not be tolerated.”

As he has in the past, he also called for building up the U.S. Navy, pressing Washington’s NATO allies to increase their military budgets in the face of a Vladimir Putin-led Russia, and ensuring that Syrian rebels “who share our values …obtain the arms they need to defeat (President Bashar Al-) Assad’s tanks, helicopters, and fighter jets.”

Independent analysts described the speech as an effort to move to the centre on foreign-policy issues, much as he did on economic issues during his debate with Obama last week. As a result, they said, his specific policy prescriptions did not differ much, if at all, from those pursued by the current administration.

“In a speech where he attempted to be more centrist, he ended up articulating positions that sound like those of Obama,” noted Charles Kupchan, a foreign-policy expert at the Council on Foreign Relations who teaches at Georgetown University.

Indeed, in both tone and policy, the speech marked a compromise between his neo-conservative and aggressive nationalist advisers on the one hand, and his more-realist aides on the other.

Absent from the speech altogether, for example, was any reference to making the 21st century “an American Century”, a neo-conservative mantra since the mid-1990s that Romney used repeatedly in his one major foreign-policy address during the Republican primary campaign almost exactly one year ago.

The latest speech comes at a critical moment in the presidential campaign. While Romney was lagging badly in the polls in late September, his strong performance in last week’s debate against a surprisingly listless Obama last week has revived his prospects.

While Obama had been leading by about four percentage points nationwide before the debate, the margin has since fallen to only two percentage points, while on-line bettors at the intrade website have lowered the chances of an Obama’s victory from nearly 80 percent to 64 percent.

Obama’s seeming passivity during the debate may have played a role in the Romney campaign’s decision to deliver a foreign-policy address if for no other reason than that it highlighted the argument that many Republican foreign-policy critics, especially the neo-conservatives, have been building over the past year: that the president’s policies in the Middle East, in particular, have been too passive, and that “leading from behind” – a phrase used by an anonymous White House official quoted in “The New Yorker” magazine 18 months ago to describe Obama’s low-profile but critical support for the rebellion against Libyan leader Moammar Qadhafi – was unacceptable amid what Romney described Monday as the world’s “longing for American leadership”.

Indeed, in the wake of last month’s siege of the U.S. embassy in Cairo and the killing of the U.S. ambassador and three other embassy staffers in Benghazi, Romney’s vice presidential running-mate, Rep. Paul Ryan, and other surrogates have tried to link recent displays of anti-U.S. sentiment and Islamic militancy in the region to disasters, notably the seizure of the U.S. embassy in Tehran, that plagued – and perhaps ultimately doomed – former President Jimmy Carter’s re-election bid in 1980.

While Romney did not refer to that period, he argued that last month’s violence in the Middle East demonstrated “how the threats we face have grown so much worse” as the “struggle between liberty and tyranny, justice and oppression, hope and despair” in the region has intensified. “And the fault lines of this struggle can be seen clearly in Benghazi itself.”

Recalling the U.S. response to a similar struggle in Europe after World War II and invoking then-Secretary of State George Marshall (without, however, referring to the Marshall Plan that poured U.S. aid and investment into Western Europe), Romney argued that Washington should lead now as it did then.

“Unfortunately, this president’s policies have not been equal to our best examples of world leadership,” he said, adding, “…it is the responsibility of our president to use America’s great power to shape history – not to lead from behind, leaving our destiny at the mercy of events.

“Unfortunately, that is exactly where we find ourselves in the Middle East under President Obama,” he said. “…We cannot support our friends and defeat our enemies in the Middle East when our words are not backed up by deeds, …and the perception of our strategy is not one of partnership, but of passivity.

“It is clear that the risk of conflict in the region is higher now than when the President took office,” he claimed, citing the killings in Benghazi, the Syrian civil war, “violent extremists on the march,” and tensions surrounding Iran’s nuclear programme.

On specific policy recommendations, however, Romney failed to substantially distinguish his own from Obama’s. Indeed, in contrast to recently disclosed off-the-record remarks to funders in which he indicated that the Israeli-Palestinian conflict was likely unresolvable, he said he would “recommit” the U.S. to the creation of a “democratic, prosperous Palestinian state”, arguing that “only a new president” can make that possible.

On Egypt, he promised to condition aid to the government on democratic reform and maintaining the peace treaty with Israel; on Libya, he said he would pursue those responsible for the murders of U.S. diplomats.

On Iran, he promised to impose new sanctions and tighten existing ones, as well as build up U.S. military forces in the Gulf; on Afghanistan, he said he would weigh the advice of his military commanders on the pace of withdrawal before the end of 2014.

On Syria, he promised to work with Washington’s partners to “identify and organise” opposition elements that “share our values” and ensure they get the weapons needed to defeat Assad. In each case, he suggested that Obama’s policies were less forceful but did not explain how.

“On matters from Syria to Afghanistan to sanctions on Iran, the speech is essentially a description of current U.S. policies,” said Paul Pillar, a former top CIA Middle East analyst now at Georgetown University. “One struggles to discern how a Romney policy would work differently.”

Pillar was especially critical of Romney’s assertion that the risk of conflict in Middle East was greater than in 2009, “given that Obama ended U.S. involvement in the one war in the Middle East in which the United States was directly participating, and given that the current greatest risk of war comes from the Israeli prime minister (Benjamin Netanyahu) with whom Romney says we should have no daylight between us.”