Nov 15 2012 (IPS) - Although it remains the fastest growing region, Asia is already experiencing an economic slowdown, with gross domestic product (GDP) expected to fall from 6.8 percent in 2011 to slightly below six percent in 2012. Several countries – including China, India and Turkey – have been adversely affected by weaker demand from developed countries. 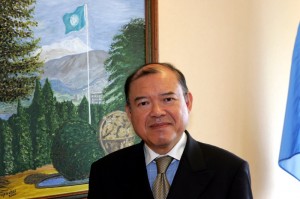 Given the headwinds from the international economy, some developing countries have since relaxed their monetary conditions and many of them have applied countercyclical measures that are helping to boost household incomes and to maintain a much needed shift from external to domestic demand, alongside the role of investment.

China, for example, has played a critical role in global rebalancing, being the chief engine of world growth since 2009 and having reduced its surplus markedly (from 10 percent of GDP in 2007 to two percent in 2012) as it shifted its economy towards domestic demand.

In China and other major economies in the region, however, internal rebalancing remains unfinished as private consumption should take on a greater role relative to investment. High wage growth will help to support this goal as well as helping to promote further external rebalancing.

High and volatile commodity prices also present a risk to the rebalancing process for the Asian region, because they can be a drag on growth. Rising oil prices, for example, act as an immediate dampener on aggregate spending in fuel-importing countries, contracting spending more or less immediately, whereas any spending expansion from fuel-exporting countries occurs only after a lag.

However the main risk continues to be concentrated in the developed economies, where the United Nations Conference on Trade and Development (UNCTAD) has long been concerned that premature and excessive fiscal austerity is choking recovery and growth unnecessarily. The developing economies in Asia have played a major role stoking the engine of growth since the crisis, but this could be derailed if there continues to be a decline in consumer demand from their traditional markets in the advanced economies, and the effects of a reduction in this demand would of course have further spill-over effects if it provoked a downturn in Asian household and investment demand.

The second aspect of the rebalancing has occurred after the crisis. Global trade rebalancing has been largely due to the decrease in China’s exports and the increase in its domestic demand. Trade imbalances for many other East and South-East Asian (ASEAN) countries have not altered significantly. In 2011, the trade surplus of ASEAN as a whole had recovered to its 2007 level and it is currently similar in size to that of China, at about 100 billion dollars.

The rebalancing of the last three years has been due to a number of factors: the worsening terms of trade, especially for China, the decrease in international demand for products collaboratively (vertically) produced by East Asian countries, and the increase in domestic demand in China.

The implications of this rebalancing are largely related to Chinese imports from the region. In this regard, the increase in Chinese domestic demand and the weak international demand for Chinese manufactures are resulting in a shift in the composition of Chinese imports. In practice, China imports relatively fewer goods to fuel its export sectors, and more consumption goods to meet the increasing domestic demand.

In this context, regional partners serving the Chinese export industry (those with vertical supply chain links with China) are likely to continue to be negatively affected as long as demand for Chinese exports remains weak. On the other hand, regional firms serving the Chinese domestic markets are likely to show continuous growth. However, a caveat is that China’s demand for final goods is still largely met by domestic producers, and thus the increase in domestic demand may not have large external spillovers.

A reduction in international demand for Chinese exports may also accelerate the transformation of the Chinese manufacturing industry towards higher value-added goods. This clearly depends on the extent to which Chinese firms are able to upgrade along the value chain and to capture market share in these segments.

If (or when) this occurs, it may have repercussions for the vertical integration of production processes in the region. In practice, Chinese firms could turn from vertically integrated partners into competitors of firms in more advanced countries. On the other hand, the process of manufacturing upgrading may benefit less advanced economies in the region, which are presently competitors of Chinese firms.

Ultimately, what is most important is that regional markets remain open, so that rising domestic demand in each country is met not only by domestic enterprises but also by those operating in other countries of the region. (END/COPYRIGHT IPS))

* Supachai Panitchpakdi is the secretary-general of the United Nations Conference on Trade and Development (UNCTAD).