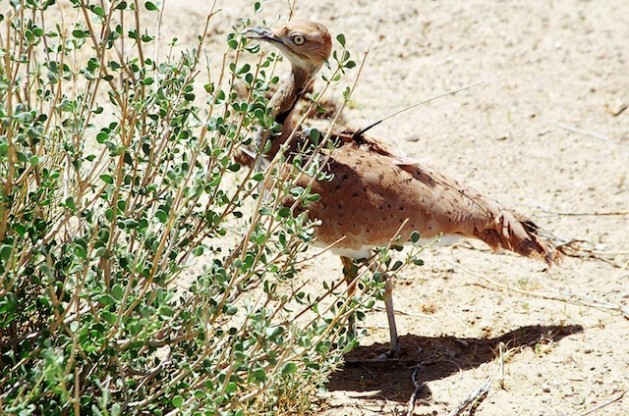 KARACHI, Dec 19 2012 (IPS) - Every year, between November and January, the Indus Flyway bears witness to a migration of an endangered bird species – the houbara bustard – from Central Asia to the deserts of Pakistan.

And every year, planeloads of Arab dignitaries follow suit, turning the desert habitats of Sindh, Punjab and Balochistan into a mini city of hunting ‘camps’, where, in the space of 10 days, they hunt down as many of the protected birds as possible.

This winter, incensed environmentalists and conservationists are wringing their hands in frustration to learn that none other than the highest authority in Pakistan, President Asif Ali Zardari, has invited the son of Qatar’s prime minister to hunt in the protected Kirthar National Park, as well as in the Thatta, Jamshoro and Badin districts in the Sindh province.

“This is quite unprecedented, the president breaking the law with such impunity,” Dr. Ejaz Ahmed of the World Wildlife Fund (WWF)-Pakistan, told IPS.

Giving the president and other high level officials the benefit of the doubt, the environmentalist conceded, “It is possible that they may not be aware of the country’s wildlife acts or do not understand the importance of protected areas.”

Spread across 25,000 hectares just outside Karachi, the Kirthar National Park is the only one of its kind in the province and falls under the Sindh Wildlife Protection Ordinance of 1972, which bans hunting and threatens poachers with long prison terms and heavy fines.

This latest hunt has been organised for the Qatari VIP by Pakistan’s Foreign Ministry, and though no details are available, activists who have long protested the annual affair know what will transpire: the illegal hunting of houbara bustard.

Over the last 20 to 30 years, the wild population of the Asian Houbara has come under serious threat, mainly because of unregulated hunting, poaching and habitat loss as a result of human activity.

While locals are strictly prohibited from hunting, the ban is lifted – briefly and blatantly – to accommodate the fancies of Arab guests.

This year 30 special permits were issued to dignitaries belonging to the royal families of Saudi Arabia (two), the United Arab Emirates (12), Qatar (11) and Bahrain (five) to set up camps in 14 districts in three of the four provinces where the birds spend their winters.

“These royal guests are permitted to hunt for ten days, during which time they can hunt down a maximum of 100 birds each,” explained an official at the Sindh Wildlife Department (SWD), speaking to IPS under strict condition of anonymity.

Each dignitary comes with an entourage of over two-dozen of his own guests, along with a brigade of staff – from cooks and waiters to drivers and laundrymen.

They even bring their own vehicles and generators as well as all the “necessary” camp paraphernalia.

“They bring their bedding, crockery, carpets – you name it and they have it,” Muhammad Khalid, a Pakistani who served as a cook for a hunting party last year, told IPS. “Even in the otherwise parched desert, water was in plentiful supply (in their camps).”

An SWD official is assigned by the government to accompany each group, to ensure that the royals’ stay is hassle free, but also to unobtrusively note down violations of national and international wildlife codes.

According to the anonymous source, “Most overstay (their allotted time) and hunt down more than 100 birds.”

Dr. Ali Murtaza Dharejo, a zoologist, says weak implementation of legislation has brought the endangered bird to the brink of extinction.

“Very soon we will be left with nothing – no wildlife, no biodiversity,” lamented Dharejo. “We are destroying the natural habitats of the birds and the animals, there is no vegetation, fewer ponds and hardly any weeds left,” he said.

“Fewer birds are coming to winter here,” the SWD official confirmed, adding, “There is no scientific study to tell us if the numbers have dwindled or whether (the birds) have simply changed their routes. But I’d say (the absence of the birds) is very likely the result of decades of unregulated hunting and severe habitat degradation due to increased human activity.”

Arab kings and princes share these concerns, albeit for very different reasons: many realise that if conservation efforts are not taken seriously, it could mean an end to this ancient Bedouin sport.

Efforts are underway to ensure the survival of the species – but they may be inadequate to withstand the hunting fervour.

This year, the two Abu Dhabi breeding centres set up by the International Fund for Houbara Conservation (IFHC), a global organisation dedicated to restoring and preserving the endangered population, reported the presence of 13,000 new birds, bringing the total to more than 120,000 since the four centres, including two in Morocco, began work in 2006.

According to Brigadier Mukhtar Ahmed, heading the Houbara Foundation International in Pakistan, “Around 2,000 of those birds from the UAE will be released by early 2013. Before being brought to Pakistan, they will be harnessed with satellite transmitters and conventional radio collars to enable scientists to track their habitat preferences; the pattern of their migration; and the rate of survival after release.”

In a further bid to stem illegal hunting, the government here has also imposed a ban on the sale of falcons – also classified as an endangered and protected species – which are used to hunt the houbara bustard. But this, too, has been continuing under the table, according to Ahmed, former president of the Falcon Foundation International in Pakistan.

Earlier this month police seized 32 falcons from a shop in Karachi. These birds, particularly the females, fetch 1,000 to 10,000 dollars, the SWD officer told IPS, while a bustard only fetches between 100 and 150 dollars.

Because of the ban, Gulf royal families are issued permits to bring their own falcons in and out of the country.

“But what actually happens is that the old ones are left here and younger ones caught in Pakistan are transported out instead,” said Ahmed, adding that the swap is easy enough to make, given lax regulations.

A customs official speaking under condition of anonymity told IPS, “Customs and immigration officials are not in a position to question the goods they (the royal hunters) carry back. Those officers who have tried to stop them have been given a rough time later.”