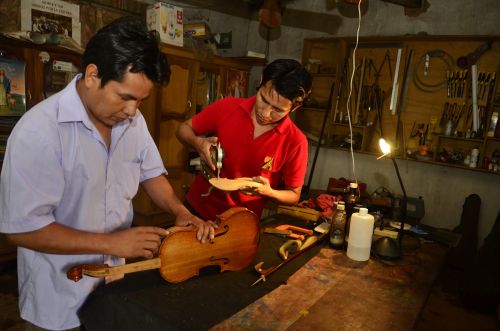 SANTA CRUZ, Bolivia, Jan 10 2013 (IPS) - They belong to the Amazon of Bolivia, where their people, the Moxena nation, are found, and they are brothers. Francisco and Alfonso Ichu Tamo came to this southern city to become the premier makers of musical instruments.

The work of Francisco, 36, and Alfonso, 33, takes place every day behind the walls of “Amatista”, their small shop in the southeastern city of Santa Cruz de la Sierra, one of the largest in Bolivia.

Far from the bustle of this city of nearly three million people, their shop is perfect for listening to the melodies emerging from the instruments the two brothers create and repair. They inherited a taste for music from their father, and took it a step further by becoming luthiers.

The Ichu Tamo brothers were born in a jungle area near the town of San Ignacio de Moxos, in the northeastern part of Beni, and for them the music is part of their existence.

“In 2000 I was one of 30 members of the Orquesta Hombres Nuevos (New Mens’ Orchestra). Played the violin. Had the problem that no one could fix our instruments. As a prank, I started repairing the bow of my violin … The teacher saw me, and told me I had a knack for becoming a luthier ,”Alfonso told IPS at his workshop.

Until then, the younger of the two brothers had never heard the word “luthier”, but it seemed very appealing.

That was how he ventured into a different field, which still kept him attached to his passion: music. Alfonso began combining two of his skills. To his musical talent he added his expertise as a craftsman and was slowly making his way.

A year later, the non-governmental Fundacion Hombres Nuevos (New Mens’ Foundation), driven and led by a Catholic priest, gave him a scholarship to pursue a specialisation in French masters. The training took place in Urubicha, an indigenous Guarayo town, famous in Bolivia for its school of American Renaissance and Baroque music.

The Instituto Formacion Integral (Integrated Training Institute), Choir and Orchestra of Urubicha are footnotes in the rescue of the little known classical Bolivian identity, which is a unique syncretism of string and wind instruments. So is the Bolivian New Men Symphony Orchestra that Alfonso belongs to.

This orchestra, participating in international festivals of early music, has rescued Baroque music composed in the 17th and 18th centuries in the Catholic missions established by the Society of Jesus (Jesuits) during the Spanish conquest.

They practically single-handedly preserve the oldest of the Chiquitos mission in Santa Cruz district, the one of the Moxenos in Beni, adjacent to the north, because other Indian missions were destroyed with all their wealth.

Some time after finishing his training in Uribicha, Alfonso encouraged his brother to move into the same craft. CAF, the Latin American development bank, took responsibility for completing his training, and helped him set up his workshop about 15 kilometres from the city centre, capital of Santa Cruz district.

Being luthiers was not difficult for these brothers, who left their native community to settle in a more vibrant city of Bolivia.

“One is born with the knowledge. It was easy for me, for example, to learn to build the sound box of the instruments, because my father taught me to carve. In the countryside, we created many things with wood … planes, cars, instruments, played with our imagination, and there was always music in our surroundings,” said Francisco.

Making and repairing musical instruments has become a way of life for Alfonso and Francisco, who can produce a violin, cello or viola in a period of between two and four weeks.

“Whatever you want! If we don’t have the pieces we make them,” boasted Alfonso, smiling. “You spend not only effort in making these instruments, but also feelings. Therefore, the instrument sounds according to the emotion of the maker… I do it thinking about big concerts,” he said seriously.

As a result, they know that to get a good instrument not only requires concepts of physics, mathematics or chemistry, but you also have to know how to choose good wood, know how to synchronise sounds and have talent, because each piece is an expression of the manufacturer’s deep feeling.

Their reputation as luthiers has risen to the point that the district’s various symphony orchestras come to them for the repair and manufacture of instruments. Several pieces have even been exported to countries in Europe and America.

“When we make a new instrument, we like to know for who it will be, because as musicians are jealous of our art,” said Alfonso, as Francis nodded.

The two Moxenos, who speak the native language of their parents as well as Spanish and some English, grew up with three brothers in a lonely farm in the Amazon jungle, away from neighbours and relatives.

“We didn’t travel to the city either, so there was only us and our imagination,” said Francisco.

The Bolivian Moxenos, also called Mojenos, belong to the Arawak culture that spread between the Caribbean and the Gran Chaco, composed of southern Bolivia and northern Argentina and Paraguay. One of its characteristics is the importance of music in ancestral rites and activities. It is composed of about 30,000 members in the urban and rural areas.

While the Ichu Tamo brothers work together, each develops his work differently.

Francisco is himself an artisan carver, who enjoys wood carving in total silence. Alfonso takes the baton on the sound, where his experience as a musician favours him.

He is responsible for the accessories, and calibrating each instrument to produce sounds according to the requirements of the future owner.

“To understand the instrument you have to know two things that go together,” says the artist. “We’ve been blessed,” said Alfonso, a way of recognizing that his tradition and artistry allows him to lead a dignified life.

“We like to perfect the art, so perhaps for this reason we do not worry about the financial issue, but we do not complain,” they said as a team, as Francisco’s meticulous and unstoppable hands gave shape to a piece of wood, which in a few days would transform into a violin.