From Brazil’s Family Farm to the School Lunchroom Table 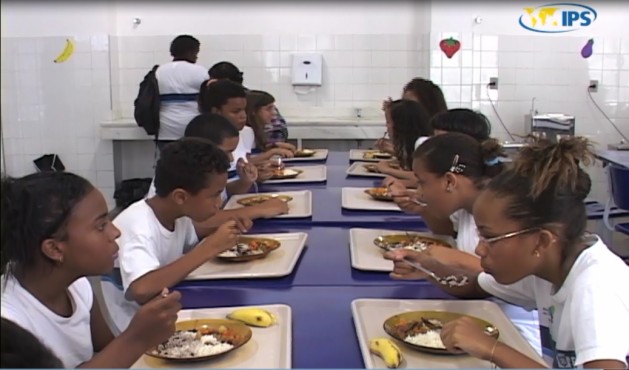 PARACAMBÍ, Brazil, Mar 12 2013 (IPS) - Separating Maria Gomes Morais’ farm and a school in Rio de Janeiro are fields, hills and dirt roads that are impassable when it rains. But a school meal programme has forged a path linking the fresh produce harvested by small farmers like her with the need to provide nourishment to 45 million schoolchildren around Brazil.

Sabugo is only 60 km from the city of Rio de Janeiro. But the small rural town, where cars, bicycles and carts pulled by tired horses share the roads, feels as if it were a world away.

The arid landscape shifts subtly to different shades of green, survivors of the tropical
Mata Atlântica forest, as you wind your way through wild banana plants and bamboo groves to reach the Sítio Recanto da Alegria (Corner of Happiness) – Gomez Morais’s farm.

The 61-year-old Morais, who is known as “Neta”, has worked since the age of 10 on the three hectares farmed since her family occupied part of an old estate. She was later granted legal title to the property, as part of a government land reform process.

“I’ve never been afraid,” she tells IPS. “I go everywhere, I climb up and down the hills. I’m not scared of snakes or things like that. It’s as if they fled from me.”

“The big farmers have their machines. Ours are our hands,” she adds with a laugh, saying she would not trade her life in the countryside “for anything in the world.”

Her only support comes from a neighbour who helps her clear her land, where she grows okra, scarlet eggplant, and fruit like lemons, oranges, limes and maracuyá. Nature provides her with different varieties of native-grown bananas.

In the past, she sold to middlemen, and had to wait a long time to be paid.

“What did we eat? I’m not ashamed to say it: angú (cornmeal or plantain mush). Today’s meal programmes didn’t exist. You would wait for the middleman to come and make his monthly purchase. And in the meantime, your shelves would get empty and the kids would go hungry,” says Neta, whose three children are now grown up.

School lunches to the rescue

But through a Rio de Janeiro state cooperative, Unacoop, Neta became a supplier of Brazil’s National School Meals Programme (PNAE), which the United Nations Food and Agriculture Programme has taken as a model to replicate in other countries.

The PNAE was linked to family agriculture in 2009 through a law that establishes that 30 percent of the food served in school meals must be bought from family farmers in the same local area as the school.

The PNAE has two aims: to guarantee meals for school-age children and teenagers while improving the lives of 4.3 million small farmers like Neta.

“The good thing is that the prices they paid us have improved,” she says. Her home, which used to be adobe, now has several brick walls covered with plaster. And she has brought a refrigerator, stove and washing machine – which she is able to use because she also has electricity now.

The PNAE gives priority to rural settlements created by the land reform process, indigenous communities and quilombos, black communities that were founded by escaped or freed slaves.

A truck, or a tractor when it rains, picks up her fruit and vegetables and takes them to the local market. From there they are transported to the state of Rio de Janeiro agricultural supply centre, CEASA. They eventually end up at one of the more than 161,000 public schools included in the national meals programme, 83 percent of the total.

Neta supplies the programme with bananas, oranges, avocados, pineapples, cashews and cherries. “Everything has to be top quality for the school lunch programme,” she says.

Breaking the cycle of poverty

The PNAE has a long history. Born in 1955 as a welfare plan that targeted poor children, it was decentralised in the 1990s and its administration incorporated representatives of families, local communities, teachers, and the executive and legislative branches, the programme’s national coordinator, Albaneide Peixinho, tells IPS.

The programme was expanded by the governments of left-wing presidents Luiz Inácio Lula da Silva (2003-2010) and his successor Dilma Rousseff.

Since 2003, the PNAE’s budget has grown 300 percent, and it was enlarged to include middle-school students and adults taking literacy courses, Peixinho adds.

The CEASA is a beehive of trucks unloading merchandise in the wee hours of the morning. The products sold by Neta and the rest of the members of the cooperative go to a special section for small farmers.

In the CEASA, a rural extension service for family farmers provides advice on planning and diversification of crops.

“The small farmer does not yet have the training to plan production and delivery times,” the head of the area, Newton Novo, tells IPS. “For a school lunch, I can’t send a green banana like I could to a big market which supplies neighbourhood markets. It has to be ripe and ready for consumption.”

But the technical aid is insufficient. “They should go out to the fields, in order to analyse the soils and see what is best to plant on each farm,” the coordinator of Unacoop, Margarete Teixeira, remarks to IPS.

Nor is it easy to become a PNAE supplier, because the programme requires land titles to be in order – a challenge in a country like Brazil, where rural land ownership problems date back to colonial times.

But an expert on food law, Leonardo Ribas, underscores the results of the programme, saying it has strengthened local economies and family agriculture, which are key “in a society where, because of agribusiness, food has become merchandise.

“It has also improved the diets of children, because they have begun to eat locally-produced foods that are grown organically,” he tells IPS.

The cafeteria in the public school in the municipality of Nilo Peçanha, which serves children from poor neighbourhoods like the Mangueira favela, serves breakfast, lunch and afternoon snacks to 500 students.

The menus are planned on the basis of “nutritional standards for healthy foods, taking into account the age of the students, how many hours they spend in school, the harvest season for each product, the cost, and the eating habits of the students,” says the director of the Municipal Health Secretariat’s Nutrition Institute, Fátima França.

The kids seem to have learned the lesson – at least, while the principal is standing nearby.

“I used to eat a lot of fast food, but now I eat a balanced diet, said 12-year-old Mariana Cristina.

“I used to eat more sweets than proper food, but in school, that’s changed,” says Elisangela, of the same age.

While the children are eating their vegetables in school, Neta is changing her clothes and heading into town to press for the purchase of a fruit ripening chamber and better organisation of the deliveries of local farmers, in order to improve the logistics of the local market, which would boost their incomes.

“I’m happy,” says Neta. “We’re helping to fight the hunger not only of the children, but of everyone.”

* With reporting by Fabíola Ortiz in Río de Janeiro.