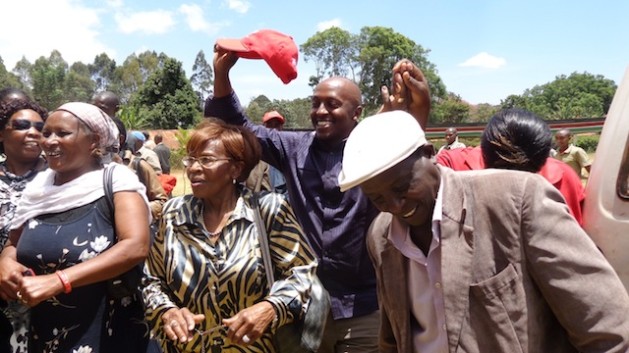 NAIROBI, Mar 12 2013 (IPS) - When a Mugumo fig tree fell down in President Mwai Kibaki’s backyard in Nyeri County, central Kenya just three weeks before the country’s presidential elections, the local elders said it carried a strong message of a change in leadership in favour of younger leaders.

In hindsight it seems an easy prediction. In the end, the 51-year-old Uhuru Kenyatta won the presidential race ahead of 68-year-old Ralia Odinga. Kenyatta won 50.07 percent of the vote and Odinga garnered 43.3 percent.

But before the country’s Mar. 4 vote, Titus Ngugi, a 60-year-old resident from Nyeri County was convinced that it predicted the election results.

“A Mugumo tree is sacred among the Kikuyu, our ancestors used to worship under it. When it falls, it communicates a strong message,” he had said, adding that among the Kikuyu ethnic group it symbolised the ascent of young leaders.

After the results were announced on Mar. 9, he said: “A margin of over (one million) votes is a validation that the fig tree did not fall for nothing. It was a sign that the time had come for younger politicians to take over.”

The elections, while characterised by tension and fears of a repeat of the post-election violence that rocked this East African nation in 2007-2008, was also a scramble for the youth vote.

Government statistics indicated that 60 percent of the 14 million registered voters were youths, and politicians realised that they could not afford to ignore them.

In fact, many of the candidates tried to adopt Sheng, a modified language spoken by young people in Kenya, in order to make inroads into this bloc of voters.

“Sheng is not just a language, it is an identity for youths, and politicians know that it is the easiest and quickest way to connect with them,” Kelvin Okoth, executive officer at Go Sheng, a social enterprise that uses Sheng to celebrate Kenya and build national unity, told IPS.

Among the slogans developed by the enterprise was “Kura Yangu Sura Yangu”, which means “My Vote, My Future”.

“Politicians were simply trying to create an emotional connection with youths. It’s just like the reggae culture – you may have to adopt certain things in order to identify with it,” Peter Otondo, a political analyst, told IPS.

Mike Mbuvi, popularly know as “Sonko”, Sheng for a rich man, joined the crop of young leaders when he became the Makadara Constituency’s member of parliament in the country’s 2010 by-elections. He was 35.

“Youths call him Sonko because of his wealth, and he saw the wisdom of running with the name,” Otondo said.

On a ballot, only people’s legal names are used. So Mbuvi legally changed his name.  He is now known as Mike Mbuvi Sonko.

But it is not merely his nickname that guaranteed his popularity. “You will never see Sonko without his trademark gold rings, necklace and trendy hairstyles, which include him shaving his head and having the word peace sprayed on it,” Otondo added.

Sonko was even kicked out of parliament in 2011 for wearing sunglasses and earrings. He was one of the front-runners for the Nairobi County Senate seat in the 2013 general elections and he won the post by a huge margin, many say, thanks to his youth appeal.

Member of parliament Rachel Shebesh also branded herself with a Sheng slogan. She opted for “Manzi wa Nai” – Sheng for a “Young woman from Nairobi.” A fashion and interior designer by profession, the 41-year-old has been labelled a sex symbol by the local media. Her adoption of the youth slang may have won her the Nairobi County Women’s Representative Seat in the recent election.

Even presidential candidate Peter Kenneth caused a buzz when he became the first politician to use a Sheng slogan “Tunawesmake” – “we can make it” – in his campaign. But while Kenneth may have focused his campaign around young people, it did not win him the election. He conceded defeat, placing fourth in the presidential poll.

Daniel Pius Kioko, a student of medicine and surgery at the University of Nairobi, and a first time voter, told IPS before the elections that he wanted to vote for those who identified with the youth.

“I will vote for a future that empowers the youth by providing capital and low-interest rates on loans,” he said.

He voted in Machakos County, Eastern Province, but said that it is still too soon to see if the candidates he voted for would empower youth like him.

“In terms of my expectations, I think it is still too early to call,” Kioko said, adding that he was waiting to see how politicians implemented their election promises.

Daniel Njoroge, 22, a first time voter in Nairobi County, Nairobi Province told IPS “the future looks much brighter than before.”

He too voted for those who identified with the youth. “I want to live in a country that empowers young people to be self-employed,” he said.

“Based on the demographics, this election was won by the youth vote. The youth understood that this country holds a brighter future for them because of the constitution,” he told IPS.

Kimosop based his assumption on the fact that voter turnout was 86 percent – the highest in Kenya’s democratic history – and that the youth accounted for a majority of those voters. However, detailed information on who voted will only be released in the coming months after an audit has been done.

“Based on the trends we have seen, we cannot ignore that the youth may have voted in large numbers but along ethnic lines,” he said.

Ethnic conflict surfaced in Kenya after the disputed presidential vote in December 2007, when an estimated 1,300 people were killed and at least 600,000 displaced. In the years since the violence, numerous NGOs and government organisations have attempted to bridge the country’s ethnic divide.

The country’s president elect also attempted to do so by choosing William Ruto as a running mate. Kenyatta is Kikuyu, and Ruto is Kalenjin. The two communities have shared a bitter, violent and painful past. However, both men are wanted for war crimes, perpetrated in the 2007-2008 post-election violence, by the International Criminal Court.

Otondo, the political analyst, said that young people, unlike the older generation, would support anyone who identified with them.

“Unlike the older generation, youths are not beholden to the bitter past that defines this country. They don’t know it, they don’t even care about it,” Otondo said.