UNITED NATIONS, Mar 8 2013 (IPS) - “In some communities, you can’t talk about violence against women,” says Agnes Leina, executive director of Il’laramatak Community Concerns (ICC), a group that promotes the human rights of pastoralist communities in northern and southern Kenya, with a special emphasis on women and girls. 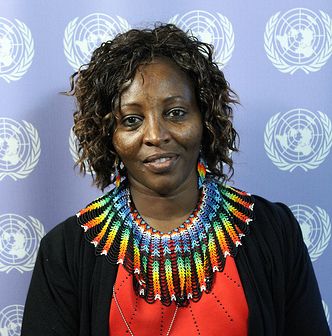 “For us, the CSW is a space to make our views heard and to give suggestions and strategies to end the violence. It’s a very important space for women to talk about violence, get resolutions and build a way forward,” she tells IPS on the sidelines of the 57th Commission on the Status of Women (CSW) at U.N. headquarters.

IPS correspondent Mathieu Vaas spoke with Leina about the situation of women in pastoralist communities and how the CSW can help change chauvinistic mindsets. Excerpts from the interview follow.

Q: In your work with Indigenous Peoples of Africa Coordinating Committee (IPACC) and ICC, you fought for the rights of indigenous African pastoralist women. What is exactly the place and role of womanhood in these communities?

A: A typical day for a pastoralist woman would be to wake up very early around five am, to go milk the cows and go to fetch water and to collect firewood. Then she would come back to make the food for the children and milk again in the evening. Some of them also go herding and look for the goats.

Things are changing slowly because most of them are getting into the market economy. They want to sell small things so they can get some money. They would milk their cows and go to the town to sell it.

A pastoralist woman is actually like a working machine, she works very hard without resting. Men look after the cows and take them to watering points that are sometimes very far off and come back on the evening and expect there will be food. I think the wife has more work than the man apart from the normal duties of a wife and a mother.

Q: Have you noticed any change in cultural perspectives on the role of women and violence such as genital mutilation in the pastoralist communities?

So definitely, for her, keeping the tradition, the marriage, and the culture is of importance, not education – that is not an emotional issue.

[At the same time] we have so many women leaders in Africa and the role of women is changing. Women are taking up leadership positions in parliament, in offices. It’s like a pyramid, there is much fewer at that [top] level. Some communities are better than others.

In Uganda, for instance, we still have a number of illiterate communities. In Rwanda, they have the highest number of women in a parliament in Africa. Women’s position is changing slowly but it depends on which country you’re talking about. As an African, African patriarchy is very strong and we have a long way to go. But it’s good to break the silence.

Q: The IPACC highlights the problem of access to healthcare and education for pastoralist indigenous communities. How do you reach out to the women in these communities?

A: In Kenya, the highest level of illiteracy is among pastoralist communities and that is why ICC is working hard to make sure there is education. We do it through transformative leadership. It’s a way of goal setting.

We have a slogan adapted from Alice in Wonderland: “If you don’t know where you’re going, any road will lead you there.” If they have no target in life, no goals, they have no idea where they’re going to.

We tell the girls, ”Look at yourself 15 years from now, what would you want to be?” and most of them are setting goals. “I would like to be a doctor, a pilot, a surgeon or a member of parliament.” Then they start role-playing this goal so when their fathers ask them to get married, they will tell him to wait for her to get a job and she would buy the cows. And the father will agree and let the girl go on with school and pursue a career.

We want to set up a trust fund because primary education is free but secondary school is not. It has been a promise for years that is yet to be fulfilled. When they have a career, they have a voice to say no to things that take them backwards.

Q: How can African governments manage to stop violence against women and to reach full empowerment for women and girls?

A: It depends from country to country. But most countries have laws against violence against women. They are signatories and have ratified the Convention on the Elimination of all Discrimination Against Women. But it’s one thing to ratify a treaty and it’s another to implement it. So we have a long way to go to implement the laws.

Maybe there has to be a change in strategy, maybe we need to involve more men because they are the perpetrators anyway. But we have broken the silence on violence against women and that is a big step. We need to act now to stop that violence once and for all.