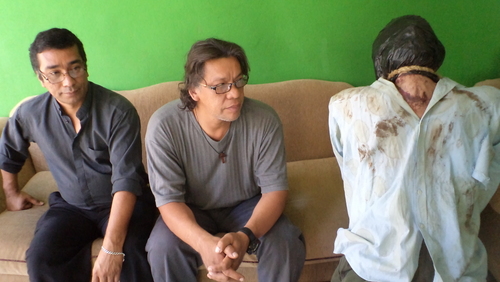 Salvadoran activists Carlos Santos (left) and Fabricio Santín alongside a papier-mâché sculpture of a torture victim with a plastic bag – “la capucha” - on his head. Credit: Edgardo Ayala/IPS

SAN SALVADOR, Mar 21 2013 (IPS) - A report containing the testimonies of victims of torture during El Salvador’s 1980-1992 civil war will be published 27 years after it was written, to help Salvadorans today learn more about that chapter in the country’s history.

The 197-page book “La tortura en El Salvador” (Torture in El Salvador), to be launched in April, contains the accounts of 270 victims interviewed in 1986, in the heat of the civil war, by the non-governmental Human Rights Commission of El Salvador (CDHES). IPS was given exclusive access to the report prior to publication.

Most of the interviews were carried out in the La Esperanza prison on the outskirts of San Salvador by members of the CDHES who had also been arrested, tortured and later imprisoned in that facility, where many of the country’s political prisoners were held in the 1980s.

“In the 1980s it was impossible to publish the document, because of the repression. But finally it will see the light of day,” CDHES director Miguel Montenegro told IPS.

When a peace agreement put an end to the conflict, a lack of funds stood in the way of publication of the report, Montenegro said.

The activist was seized in 1986 by the notorious Treasury Police, and learned first-hand about the torture techniques practiced by the security forces.

Because of their involvement in serious human rights abuses, the National Police, the Treasury Police and the National Guard were dismantled and replaced by the National Civilian Police under the United Nations-sponsored peace accord reached in January 1992 by the Farabundo Martí National Liberation Front (FMLN) guerrillas and the government of Alfredo Cristiani of the far-right National Republican Alliance (ARENA).

More than 40 torture techniques are described in detail and depicted in drawings in the report.

One of the most commonly used techniques was the “avioncito” (airplane), in which the victim’s hands were tied behind his or her back and the victim was suspended in the air from the wrists, often causing dislocation of the shoulders.

In the “capucha” (hood), a plastic bag was placed over the prisoner’s head, to partially suffocate them, while the “submarino” (submarine) involved simulated drowning.

Other methods were electric shock, cutting off the tongue, or destroying the eyes with chemicals.

“They would take me to a room in the Treasury Police headquarters in San Salvador where the walls and the floor were covered with dried blood,” Montenegro said.

The book also provides profiles of torture victims who were forcibly disappeared.

The abuses formed part of a state policy put into effect by the army high command, and Salvadoran society has a right to know what happened, Montenegro said.

The amnesty law approved by Congress in 1993 protected the perpetrators of war crimes and other human rights abuses committed during the conflict from prosecution.

But retired generals Eugenio Vides Casanova and José Guillermo García, both of whom served as defence minister in the 1980s, were found guilty in 2002 by a U.S. court for the torture of three civilians by units under their command. The court ordered the two retired officers to pay 54.6 million dollars in damages to the civilians.

The CDHES document is coming out shortly after an investigative report by the BBC and The Guardian, published as a documentary on Mar. 5, revealed that retired U.S. Colonel James Steele, a Special Forces veteran of Vietnam who was posted in El Salvador in the 1980s, was later sent to Iraq.

The British media report said Steele, who trained and directed counterinsurgency operations in El Salvador, was sent to Iraq to implement the so-called “Salvadoran option” to fight the insurgency after the U.S.-led invasion of Iraq 10 years ago.

Steele was reportedly sent to train special Iraqi police brigades in torture techniques employed in this Central American country in the 1980s.

“It is sad that what was used here in El Salvador is being revived in Iraq; this country served as the school,” Montenegro said.

Another investigation into torture committed during the civil war is being conducted by the Salvadoran Association of Torture Survivors (ASST), founded three years ago.

The ASST has two aims: to find out what happened and to bring complaints before the Inter-American Commission on Human Rights (IACHR). “We are documenting the cases, to file formal complaints,” Carlos Santos, the president of the ASST, told IPS.

Santos was studying theatre when he was arrested in 1983 along with another student, Fabricio Santín, in the eastern city of San Miguel, where they were tortured before they were transferred to La Esperanza prison.

“Because no one was ever held accountable or punished for the abuses, there is a risk that they could be committed again in the future,” said Santín. “And that is what we don’t want.”

In 2012, the IACHR accepted a complaint brought by the Human Rights Institute of the Central American University in representation of Santos and Rolando González, another member of the ASST.

The complaint also covers four other cases, including the death of Salvadoran poet Roque Dalton, who was killed in 1975 by fellow members of one of the left-wing groups that made up the FMLN, after he was found guilty of insubordination and spying for the U.S. Central Intelligence Agency in a “revolutionary trial”.

The case brought before the IACHR accuses the current government of centre-left President Mauricio Funes of the FMLN of negligence with respect to investigating crimes like torture.

The Funes administration has refused to sign the Optional Protocol to the Convention against Torture, which provides for in situ monitoring such as unannounced visits to local prisons.

Nor has it ratified the Rome Statute, which established the International Criminal Court set up to try war crimes, genocide and other crimes against humanity that national courts cannot or will not handle.

“These are the things that worry us, because they hinder progress in the search for truth, justice and reparations,” the president of the Committee of Relatives of Victims of Human Rights Violations (CODEFAM), Guadalupe Mejía, told IPS.

Since September 2012, Santos and Santín have been touring the country with the exhibit “Nunca más en El Salvador” (Never Again in El Salvador), which uses papier-mâché sculptures of people to show torture techniques used during the years of state violence.

“Some of the images are shocking, but we want to show them so that this won’t happen again,” Santín said.