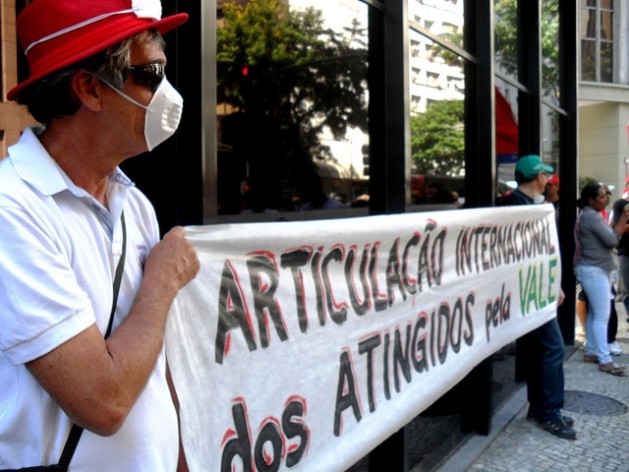 The purchase of shares in transnational corporations, which grants the right to take part in shareholders’ meetings, is now standard practice among social movements and NGOs in order to set forth their demands and protests directly to investors.

Public companies listed on the stock market are compelled by law to hold an annual general meeting at least once a year at their headquarters.

At these meetings, investors receive information about the company’s results and can question management about what was done in the previous year, as well as take payment of dividends.

“This is the fourth time the Network has adopted this initiative. The meeting was successful. The annual general meeting anticipates that shareholders will participate, and our only opportunity to do so was when a vote was taken on the agenda. That’s when we asked for permission to speak,” lawyer Danilo Chammas told IPS about his participation in the three-hour meeting involving 50 shareholders.

While the activists took the floor, most of those present kept silence, but there were moments of tension when questions and criticisms were put forward.

“The opportunity for dialogue was positive, but there were no great prospects of change. Our aim is to draw attention to an aspect of which shareholders are ignorant, that should also be taken into account,” Chammas said.

According to estimates by social organisations, Vale, privatised in 1997, destroyed a total of 742 square kilometres of land in 2010.

Meanwhile, dozens of demonstrators belonging to the Network, an umbrella group for organisations in 10 of the 38 countries where Vale operates, gathered in front of the company offices in the centre of Rio de Janeiro to protest.

“As shareholders, we explain what the company’s risk-taking and violations mean for the affected communities,” activist Sandra Quintela, of the Institute for Alternative Policies for the Southern Cone (PACS), told IPS.

In her view, their strategy multiplies the pressure on the company and on the justice system.

“We try to strengthen the struggle, link the different resistance efforts and come up with common strategies. The way this company behaves in the mining areas is extremely cruel. It isn’t development, it’s destruction,” she said.

This is the second year that six residents from the village of Piquiá de Baixo, in the municipality of Açailândia in the northeastern state of Maranhão, have come to Rio to lodge their complaint.

A pig iron works has been installed in the village of 380 families, polluting the air, water and soil. For the past five years, local residents have been demanding relocation to a safe area.

“Piquiá de Baixo will cease to exist. We are obliged to move somewhere else, there is no alternative. The train that Vale loads with mineral ore crosses the town and the ore deposit is above our town. The five ironworks are practically on top of our vegetable gardens,” said 69-year-old “Seu” Edvard Dantas.

He has lived in Piquiá for 26 years and has witnessed the village’s decline. Before the ironworks arrived, it was a rural area. Seu Edvard grew rice, maize and cassava to feed his large family.

Now only his wife and one daughter still live with him. His other five children have left Piquiá, as have many other former residents.

Lung cancer, respiratory diseases and allergies are now common. “In the garden and on the tiled roof of my house there is a permanent layer of dust. We are suffering badly, and we hope it will not take more than two years before we are transferred to a new home,” he said. But he added that the new houses where they are to reside have still not been built.

Fabião Maniça, of the Tete Communities Association for Support and Legal Assistance in the central region of Mozambique, where Vale obtained a 35-year concession to exploit the Moatize coal mine, said “We’re joining forces to voice our demands.

“The company is not opening up opportunities for direct negotiations with the associations or the communities,” he said.

The main problem in the southeast African country is the relocation of 1,300 families displaced by the coal mine, because the new houses built for them are already showing structural flaws.

“The families moved a year and a half ago, and cracks have appeared – the dwellings are badly built. There is no drinking water for the children. There is no land to grow crops or room to raise children. They promised they would help us for one year, giving us food, free transport and jobs, but they haven’t kept their promises,” he said.

In some cases, families were relocated up to 50 kilometres away from where they used to live, Maniça said.

“We were in fertile areas, and our main activity is agriculture…My father is buried on our land. People were forced to abandon their ancestors and go far away,” he complained.

At IPS’s request, Vale handed over a communiqué saying it “respects the right to free expression” and is “available to listen to suggestions and criticisms of its enterprises.”

The company said it is participating in the relocation process for families from Piquiá de Baixo. In July 2012 it signed an agreement with the public prosecutor’s office to earmark some 200,000 dollars for the new housing estate.

In the case of Mozambique, two areas were selected for relocating the families, with “public participation consisting of three hearings, 20 theatre performances in the most widely spoken local language (Nyungwe), 110 meetings with the community and its leaders, 4,927 home visits and 639 consultations through the permanent services provided at the start of relocation,” according to Vale.

As part of the Moatize coal mine project, in addition to housing, schools were constructed or rebuilt, and health posts, a maternity clinic, a police station and streets were provided. Electricity was installed on the main avenues. The houses with structural problems, said Vale, are already being repaired.