WASHINGTON, Apr 3 2013 (IPS) - A confluence of factors could make 2013 the most fruitful opportunity in years – and for years – for potentially major action on climate change, according to a leading voice on climate change policy, the British economist Nicholas Stern. 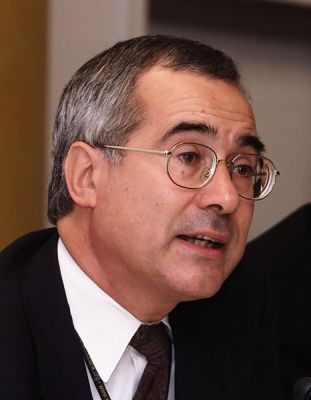 Nicholas Stern has been credited with having had perhaps the most significant impact on the international public understanding of the threats posed by climate change. Credit: IMF

“This combination of political circumstances in 2013 is as good as it’s likely to get,” Stern said Tuesday in a major address at the International Monetary Fund (IMF) headquarters here, warning that failures of political will had made action on climate change progress occur “far too slowly”.

Still, he cited new or renewed administrations in the United States and China that won’t have to face further elections, alongside strong pledges by leaders in both Washington and Beijing. Stern also noted new commitments by the IMF, World Bank and Organisation for Economic Cooperation and Development (OECD), continued support from European leaders, and important movement among developing countries.

“Look at plans in Ethiopia, Mexico, South Africa – these countries have leaderships taking this issue very seriously,” he said. “So 2013 is the best possible year to try to redouble efforts to create political will that hitherto has been much too weak … [but] we need to do much better at knowing what others are doing and to collaborate.”

Stern, the author of a major 2006 report for the U.K. government on the economic impacts of climate change, has been credited with having had perhaps the most significant impact on the international public understanding of the threats posed by climate change. Yet at the IMF on Tuesday, he warned that his landmark study “badly underestimated” these risks.

Warning that the world now looks on track to raise the global temperature by as much as five to seven degrees Celsius by the end of this century – which he said would result in a “radical transformation” – Stern noted that his previous forecasting “should have been much stronger”.

“Today, emissions are at the top of or even above what we thought about then, while some effects are coming through faster,” he said.

“We didn’t say enough about the interactions of climate ecosystems. Further, regarding those elements missing from the scientific models, we now recognise those are even more important than we thought at the time … a lot of things aren’t in the models simply because scientists don’t fully understand them yet.”

In fact, Stern puts down these underestimates to an inherent inability of the types of models that both scientists and economists still use in forecasting global weather systems changes.

“The failure … is that lasting destruction isn’t a part of these models – they’re ahistorical in terms of economic impact,” Stern, a former U.K. chief economist for the World Bank, said.

“Following the Pakistan floods in 2007, some parts of the country saw development pushed back by 20 years. But if these types of events were to happen, say, every 10 years, the current models don’t allow us to speak about this.”

Stern called for a “new generation” of modelling that can take into consideration the impact of climate change on human lives and human welfare.

“If we had to describe the destructive events of the last century – World War I, World War II, the Holocaust – we wouldn’t do it in terms of aggregate gross domestic product,” he said. “Instead, we have to learn to discuss risk to describe, as well as we can, all dimensions, including loss of life. What would we be ready to pay to reduce this risk?”

Stern was particularly disparaging about three aspects of the current global discussion on climate change. First and foremost, he warned against the common tendency, particularly among policymakers, to view the discussion as one of climate action versus jobs and economic growth.

Second, he noted the danger of decoupling issues of development, mitigation and adaptation to climate change, stating these three always need to be considered “bound up” together.

Third, he pointed out the “acute contradiction” of believing simultaneously that current pricing of oil and gas – widely seen as far too low – can coexist with a goal of keeping the planet’s temperature rise to just 2 degrees Celsius this century.

Stern’s appearance at the IMF comes as both the fund and its sister institution, the World Bank, are taking significant new steps into the global climate discussion. He called both lenders “absolutely fundamental to this whole story”.

“It’s not odd or off point for the World Bank and the IMF to be talking about climate change as the single biggest long-term threat to economic growth,” Rachel Kyte, the bank’s vice-president for sustainable development, said Tuesday, speaking alongside Stern.

“If we have a mission that is aimed at speeding up the rate at which we end poverty, building more inclusive societies through shared prosperity, then climate change is the rug that will get pulled out from beneath all of our clients. And it will be pulled unevenly, with the poor and vulnerable suffering the most.”

While many are applauding the new climate focus by both of these institutions, some are expressing concerns about a current lack of policy harmonisation. On Wednesday, 55 civil society organisations from 20 countries sent an open letter to President Kim, urging the World Bank to stop funding fossil fuel projects unless they are specifically aimed at increasing energy access for the very poor.

“Nicholas Stern puts a significant emphasis on getting the price of carbon right, and clearly bank officials do understand this,” Janet Redman, director of the Sustainable Energy and Economy Network at the Institute for Policy Studies, a Washington think tank, told IPS.

In response, the bank’s Kyte told Bloomberg News Wednesday that her institution’s fossil fuel-related lending last year amounted to around 19 percent of total energy funding, aimed at ensuring that poor countries can deal with everyday needs. She also said that, over the past decade, the bank has doubled its investments in renewables.