UNITED NATIONS, Apr 30 2013 (IPS) - The face of migration is changing dramatically as women and girls now represent about half of the over 214 million migrants worldwide. 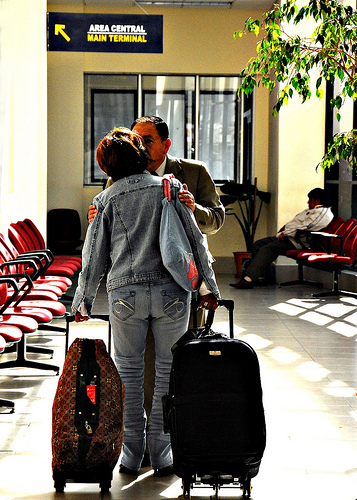 Bolivian migrant in the airport in El Alto, next to La Paz. Credit: Franz Chávez/IPS

And in some regions of the world, they outnumber their male counterparts, says Dr. Babatunde Osotimehin, executive director of the U.N. Population Fund (UNFPA).

Addressing a weeklong meeting of the 46th session of the U.N. Commission on Population and Development (CPD), which concluded Friday, he pointed out that many women migrate on their own as heads of households, to secure a livelihood.

“Others leave their homes in search of more open societies, to get out of a bad marriage, or to escape all forms of discrimination and gender-based violence, political conflicts, and cultural constraints.”

Like other migrants, Dr. Osotimehin said, women contribute to the well-being of their households, through remittances that benefit the family.

An increasing number of migrants were women and children who bore the brunt of human rights violations around the world.

After a contentious debate, the CPD adopted a belated consensus resolution late Friday, recognising the central role of sexual and reproductive rights giving it prominent visibility.

This year’s CPD session focused on new trends in international migration. And the change in the gender composition among migrants is one of the growing new developments.

Yasmeen Hassan, global director of the New York-based Equality Now, told IPS, “In our experience, the so-called migration of women is deeply linked to trafficking, whether for sex or for domestic labour.”

She said women who see themselves as voluntary migrants find themselves trapped in situations of deep exploitation.

“And these are made possible and exacerbated by their vulnerable legal situation, their lack of social and family contacts, their isolation, their inability often to understand the language or to access systems of protection,” she said.

These factors make them a very attractive target of traffickers, said Hassan, formerly with the U.N. Division for the Advancement of Women and who worked on the implementation of the Convention on the Elimination of All Forms of Discrimination Against Women (CEDAW).

Speaking on behalf of the United States, Margaret Pollack said women migrants were often the victims of exploitation and sexual abuse, often lacking access to health care. She said this was particularly true for young migrants and others belonging to vulnerable migrant populations, such as LGBT (Lesbian, Gay, Bisexual and Transgender) persons and the disabled.

Pollack called for specific policies aimed at helping those groups and for the collection of data on the abuses to which migrants were subjected.

A study released last week by the Geneva-based International Labour Organisation (ILO) said an estimated 600,000 migrant workers “are tricked and trapped into forced labour across the Middle East”.

Based on more than 650 interviews conducted over a two-year period in several countries, including Jordan, Lebanon, Kuwait and the United Arab Emirates (UAE), the report points out the Middle East alone hosts millions of migrant workers, who in some cases exceed the number of national workers substantially.

In Qatar, about 94 percent of workers are migrants and in Saudi Arabia the figure is over 50 percent.

Last month a Sri Lankan maid, accused of allegedly killing an infant in her care, was beheaded in Saudi Arabia.

“Human trafficking can only be effectively tackled by addressing the systemic gaps in labour migration governance across the region,” Frank Hagemann, ILO deputy regional director for the Arab States, told the commission.

The resolution, adopted by the commission, calls on all member states to ensure migration is integrated into national and sectoral development policies, strategies and programmes.

At the same time, there should be due consideration to the linkages between migration and development in the further implementation of the 1994 Programme of Action adopted at the International Conference on Population and Development in Cairo, and in the elaboration of the post-2015 development agenda.

The resolution specifically calls for the protection of the rights of migrant women and children, including those related to sexual and reproductive rights.

In a new report on migration released last week, the United Nations says new poles of economic growth in the global South have created new migratory flows between countries of the South.

In recent years, there has also been a significant increase in migration from developing to developed countries.

“Growth in migration from the South to the North has generated significant remittance flows to the South that can spur economic growth,” the report said.

And according to the World Bank, officially recorded remittances to developing countries reached 406 billion dollars in 2012.

Many of the rapidly growing economies in East and Southeast Asia, South America and West Africa have become poles for migration within their respective regions, the study adds. In addition, the oil-producing countries of Western Asia and some countries of Southern Europe experienced a rapid growth in the numbers of international migrants between 1990 and 2010.

Following the onset of the global financial crisis in 2008, some trends slowed or reversed temporarily, but more recent national data indicate that migration to most of those countries rose in 2011.